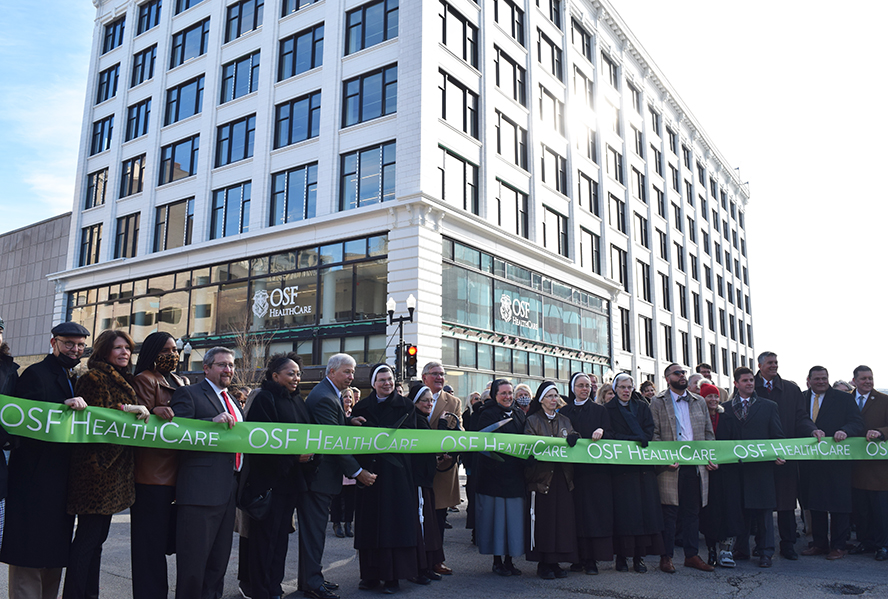 The new OSF HealthCare Ministry Headquarters at 124 S.W. Adams St. in downtown Peoria provides the backdrop as members of the Sisters of the Third Order of St. Francis and other OSF leaders are joined by city, state, and federal dignitaries as well as project and labor leaders for a ribbon-cutting ceremony Dec. 17. (The Catholic Post/Tom Dermody)

The health care ministry of the Sisters of the Third Order of St. Francis has long been a part of the City of Peoria’s landscape. With a seven-story historic building transformed to serve as OSF HealthCare’s new Ministry Headquarters, it is now part of the downtown’s skyline and revitalization.

Ribbon-cutting ceremonies were held Dec. 17 in the shadow of the building at 124 SW Adams St. that has been both historically preserved inside and out and significantly modified for its new role as home to 500 OSF HealthCare employees, known as mission partners. “Today is kind of like a homecoming for our Sisters,” said Sister Judith Ann Duvall, chairperson of the boards of OSF HealthCare, in noting the “little house hospital” established by pioneer Sisters of her community 144 years ago was only seven blocks from the new downtown Ministry Headquarters location. (The Catholic Post/Tom Dermody)

“Today is kind of like a homecoming for our Sisters,” said Sister Judith Ann Duvall, OSF, chairperson of the OSF HealthCare boards, in noting that only seven blocks further south on Adams Street was where pioneer members of the religious community first established a “humble little house hospital.”

“So this return to downtown . . . is exciting and very meaningful,” said Sister Judith Ann, the first of several to address a crowd of more than 100 who gathered on the street outside the facility’s front entrance. “I know that God’s loving arms are surrounding us now,” she added.

The speakers and attendees reflected the public-private partnership that helped fund the $150 million, three-year project. There were city, state, and federal leaders joined by project coordinators, representatives of the building trades, and OSF leadership. The ribbon cut at the end of the ceremonies stretched long and was held by dozens of dignitaries.

“This building will allow us to bring hundreds of our mission partners together under one roof from across multiple sites here in Peoria,” said Bob Sehring, chief executive officer of OSF HealthCare. Both he and Sister Judith Ann noted the majority of the work was done during the COVID-19 pandemic.

“Through God’s love we were able to provide many employment opportunities during a time when so many struggled to provide for the needs of their families,” said Sister Judith Ann.

In fact, more than 800 construction and trade workers helped bring the 116-year-old building — originally the Block & Kuhl department store and nicknamed “The Big White Store” — back to life in a grand way. Previously owned by Caterpillar, the building — along with the Peoria Professional Building and an adjacent parking lot — were donated to OSF HealthCare in January of 2018.

The project is in its final stages, so no tours were given on the day of the ribbon-cutting. Nearly 500 OSF HealthCare mission partners will begin moving into the new headquarters building on Jan. 4, 2022.

“A GREAT DAY FOR PEORIA”

“What a great day for Peoria,” said Spain, expressing a sentiment often repeated. He invited the crowd to think about what it must have been like to be at the original ribbon cutting for the building in 1905. Two blocks of Adams Street in downtown Peoria were closed to traffic so more than 100 people could take part in ribbon-cutting ceremonies for the new OSF HealthCare Ministry Headquarters. Here they are listening to remarks from Peoria Mayor Rita Ali. (The Catholic Post/Tom Dermody)

“It was like nothing ever seen in Peoria,” said Spain, calling it the “first steel building to be constructed of this magnitude in downstate Illinois.”

The new OSF HealthCare Ministry Headquarters is more than 275,000 square feet distributed over seven levels, a basement, and a sub-basement.

Speaker-after-speaker thanked the Sisters and OSF HealthCare leaders for their long commitment to the city and the region.

“I am so happy that OSF has once again shown its commitment to Peoria by renovating this iconic building in the heart of downtown for their headquarters,” said Mayor Ali. “Now it will be the base for hundreds of OSF employees whose presence will bring some much needed revitalization to our downtown area.”

EDITOR’S NOTE: More photos from the ribbon-cutting ceremony have been posted to The Catholic Post’s site on Facebook.