Renovation is blessed during open house at St. Matthew School in Champaign 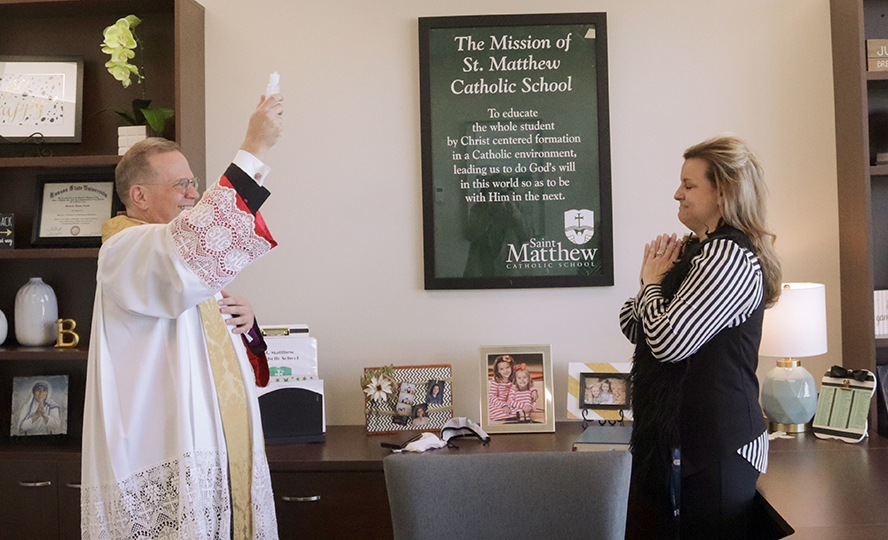 After offering a prayer of blessing for the renovated St. Matthew School in Champaign, Msgr. Stanley Deptula, pastor, sprinkles holy water on Michelle Biggs, principal, and her new office space. The renovations were made possible by the Vision Capital Campaign, which raised more than $4 million. (The Catholic Post)

CHAMPAIGN — With a vision, anything is possible. Just ask the members of St. Matthew Parish and School.

Despite the pandemic, they were able to raise $4.4 million to renovate the 60-year-old school — from the studs out — and create a new learning environment for the 398 students there. They got to see what their prayers and hard work accomplished at open houses Dec. 12-13. 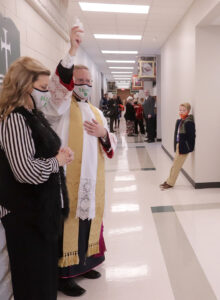 “May the Lord truly bless this place, everyone who works here and teaches, and in a special way may the Lord bless all of our young people who come to this school to encounter the love of Jesus Christ,” Msgr. Stanley Deptula, pastor, said as he blessed the school last Sunday. After sprinkling holy water on Michelle Biggs, principal, and her office, he sprinkled the school vestibule and the families gathered there.

“While people, I think, are very pleased with what we did, it was all needed,” Biggs told The Catholic Post. “There’s no luxury. It’s just beautiful. It’s functional. It’s what was needed.”

With plans drawn by Bob Kapolnek of KAP Architecture, Wells and Wells Construction of Champaign started work on the school began just after St. Matthew dismissed for summer vacation.

“On June 1, they came in and they started the asbestos (abatement) and they just mowed through,” Biggs said.

In addition to the new flooring, windows and lighting, each classroom from first through eighth grade got its own air conditioning and heating unit, which is controlled by the teacher. By renovating the vestibule, it was possible to add a classroom, a conference room, and an office for Jeff Starwalt, assistant director of school administration and assistant athletic director.

The expansion also included larger, updated offices for Biggs and Stephanie Goebel, director of school administration; a teacher workroom; faculty restrooms; and a health room. Not only was the faculty room refreshed, but a small kitchenette with cabinetry was added.

There is also a new bell system, along with new security doors and cameras, and a new phone system for the school and parish.

One of the biggest changes came when a portable classroom, which had been used for Spanish and art classes, was removed. Originally used for the kindergarten, it was intended to be used for three years, but served St. Matthew School for 25 years.

It had outlived its usefulness, but was also a security risk since students had to leave the building to get to it, Biggs said.

“Again, by making better use of our campus, by creating one new classroom out of the former vestibule, and then repurposing other parts of our campus, we are now all under one roof,” Msgr. Deptula said. 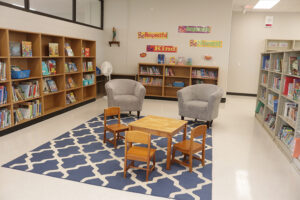 Trading rooms, such as the library, helped St. Matthew School make better use of the space they had during the “once-every-60-years” renovation at the Champaign school. (The Catholic Post/Jennifer Willems)

It didn’t take long for the principal to tell her pastor that they needed to look into teacher salaries, curriculum, technology and enrollment, as well as the facilities.

Before COVID-19 hit, the math and religion curriculums were updated and they were working on science, Biggs said. This year, social studies and reading are new.

“So every year we will look at our oldest curriculum to make sure it’s still meeting the needs of everybody,” she explained.

In terms of technology, every classroom has new smartboards and students in third through eighth grade each have a Chromebook. The pupils in pre-kindergarten through second grade use iPads.

Professional development and improved salaries were key for Biggs.

“That was one of the first challenges,” according to Msgr. Deptula. “Without enrollment, without the reason the school exists, why would we do any of it?”

He said parishioners have always been good about supporting the school because the school came first. “We worshipped in that school for a long time before we had a church,” he told The Post.

After Biggs and Msgr. Deptula started talking about their vision for St. Matthew School, they pulled other school and parish leaders into the conversation to ask “Where are we going?”

“For me, the biggest thing is unity of mission,” Msgr. Deptula said. “It was seeing the parish and the school work together for these enhancements, because the school is an extension of the parish. The school is our largest and maybe most important apostolate.”

But St. Matthew Parish and School are one campus with one mission, he said.

The Vision Committee identified parish needs, too. One of them was addressing structural issues with the bell tower next to the church. In addition to tuck pointing and reinforcing the iconic feature, the digital bell system was obsolete.

Parishioners wanted real bells that “will keep swinging when Christ comes in glory,” so St. Matthew Church commissioned three bronze bells that will be installed sometime soon, he said, noting that this project had been significantly delayed by the pandemic.

It is tradition to name bells and the donors have chosen St. Cecilia, St. Thomas and Agnus Dei for the bells at St. Matthew.

To get started with the school renovation and projects for the church, $3.5 was needed. That was accomplished with a $1 million bequest.

Between COVID-related expenses and necessary changes to the plan, the cost rose to $4.9 million. They have raised nearly $4.5 million and received a small loan from the Diocese of Peoria to finish the work.

There are other dreams, such as expanding the gathering space or narthex for the church. The current space is tight, Msgr. Deptula explained.