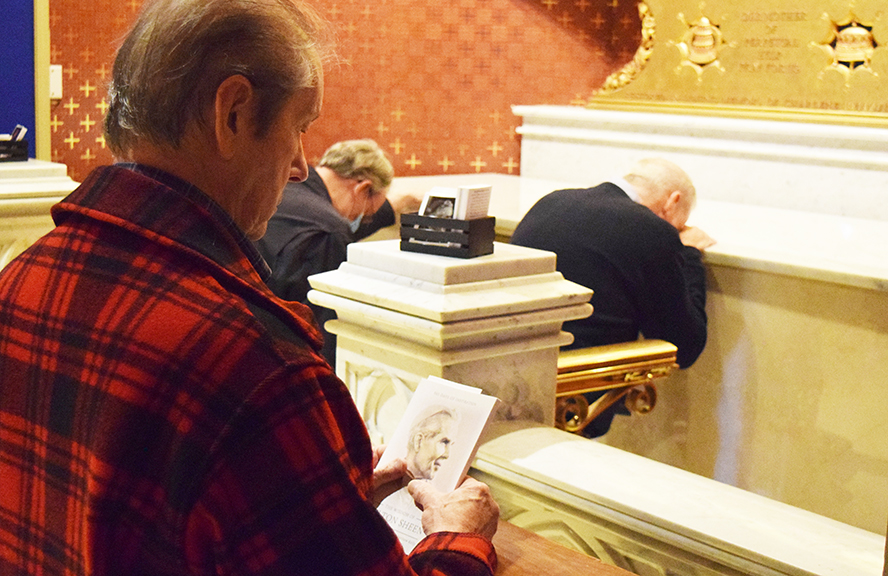 Robert Littmann of St. Philomena Parish in Peoria holds a book with an image of Venerable Archbishop Fulton J. Sheen as he an other participants in a "Sheen Experience Retreat and Pilgrimage" pray at the sainthood candidate's tomb at St. Mary's Cathedral in Peoria on Dec. 4. (The Catholic Post/Tom Dermody)

The life and teachings of Venerable Archbishop Fulton Sheen were recalled in special ways in early December.

On the weekend of Dec. 3-5, nearly 30 pilgrims gathered at the Diocese of Peoria’s new Sacré-Coeur Retreat Center in Magnolia for its first “Sheen Experience Retreat and Pilgrimage.”

And on Dec. 9 — the 42nd anniversary of the sainthood candidate’s death — Coadjutor Bishop Louis Tylka celebrated a morning Mass in front of Archbishop Sheen’s tomb at St. Mary’s Cathedral in Peoria.

The private Mass in the cathedral’s Lady Chapel was attended by about three dozen invited guests, among them Sheen family members including the archbishop’s closest living relative, his niece Joan Sheen Cunningham. It was also livestreamed and archived on the Diocese of Peoria and Sheen Foundation’s social media sites.

In his homily, Bishop Tylka called Archbishop Sheen “a powerful witness to faith in Jesus Christ” and reflected on the wisdom found in just one line from his book “Life of Christ”: 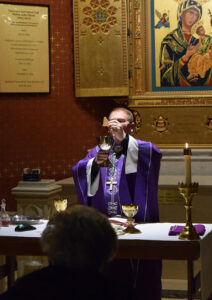 “Divinity is always where one least expects to find it,” Archbishop Sheen wrote.

As we journey through Advent toward Christmas, Bishop Tylka said Christ doesn’t only come at Christmas, but “is always present to us.” He encouraged all, despite distractions of modern life, to recognize “the grace of God’s presence to help us in every moment” and to allow ourselves to be surprised “when we unexpectedly feel the power of God’s love and mercy and compassion in our life.”

Since arriving in the Diocese of Peoria in the summer of 2020, Bishop Tylka said “no matter where I go” people want to talk to him about how the ministry of the famed media pioneer, evangelist, and author has influenced their own faith life.

“I’m getting to know my friend a lot better,” he said of Archbishop Sheen.

Bishop Tylka also recalled that, one year ago at the anniversary Mass, he had the sad duty of announcing the death of Msgr. Richard Soseman, a priest of the diocese who was vice postulator of Archbishop Sheen’s sainthood cause.

“As much as we honor and remember Fulton Sheen himself today, let us also remember Msgr. Soseman’s joining Fulton Sheen in the gift of everlasting life that comes to us from our Savior, Jesus Christ,” said Bishop Tylka.

Meanwhile, the first “Sheen Experience: Retreat and Pilgrimage” drew retreatants from as far as Minnesota and Texas. The retreat was led by Msgr. Stanley Deptula, executive director of the Archbishop Fulton Sheen Foundation, and Julie Enzenberger, administrator. Bishop Tylka also took an active part, celebrating Mass for retreatants at St. Mary’s Cathedral in Peoria on Dec. 4 when attendees boarded a bus to visit Sheen sites in the city, including a stop at the Sheen Museum at the Spalding Pastoral Center. The bishop then traveled to the retreat center that evening to lead evening prayer and join retreatants for dinner.

Bishop Tylka told retreatants that just as God called, sent, and empowered Archbishop Sheen for his vocation, so too has he uniquely called and equipped them to go out and proclaim the Gospel.

Among those taking part in the retreat were Phil Rosenfeld and Jorge Aguilar of San Antonio, Texas, and co-founders of the Fulton Sheen Prayer Group Apostolate. The project takes 50 lessons Archbishop Sheen created in 1965 — “The summation of his life’s work,” said Rosenfeld — and refines them for small group discussions. The outreach is growing. It is now used in seven parishes and two prisons in the Archdiocese of San Antonio, and a Saturday morning Zoom group now welcomes participants from around the nation.

Three Sheen retreats are planned for 2022 at the Sacré-Coeur Retreat Center. They include a summer retreat June 17-19; a retreat for priests Sept. 12-16; and a winter retreat and pilgrimage Dec. 2-4.

More information is available at celebratesheen.com/retreats.