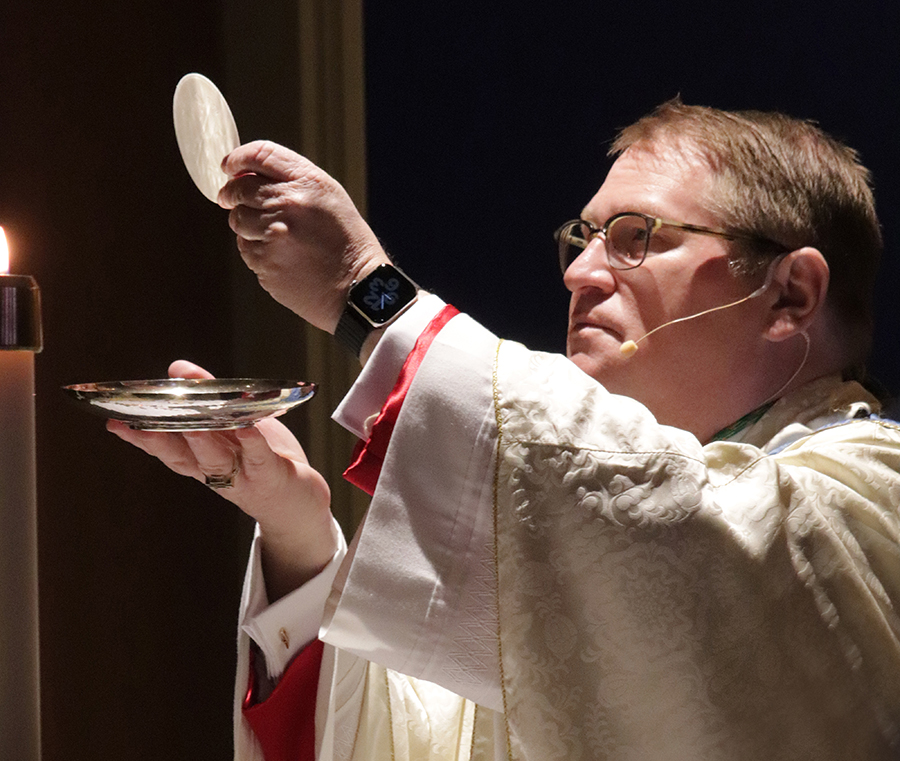 A three-year National Eucharistic Revival plan approved by the U.S. bishops on Nov. 17 presents “a great opportunity” for Catholics of the Diocese of Peoria to “deepen our appreciation for the gift of the Eucharist and its central place in our life of faith and in the church.”

So said Coadjutor Bishop Louis Tylka after returning from the U.S. bishops’ fall assembly in Baltimore. The Nov. 15-18 gathering was the first in-person meeting of the nation’s bishops since 2019, and the first that Bishop Tylka has attended since his episcopal ordination in the summer of 2020.

“The whole idea of the Eucharistic Revival is to help us to deepen our appreciation for the gift of the Eucharist and its central place in our life of faith and in the church.” — Coadjutor Bishop Louis Tylka

Adding to the “great news” about the revival plans, said Bishop Tylka, is that the multi-year focus on the Eucharist will culminate in a rare National Eucharistic Congress very near our diocese. The major event — the first of its kind in the U.S. since 1976, when more than 1 million attended in Philadelphia — will take place in Indianapolis in July of 2024.

“It will be that much more easily accessible to us in the Diocese of Peoria,” said Bishop Tylka. And he speaks from recent experience, having just taken part in the National Catholic Youth Conference in Indianapolis from Nov. 18-20.

Among the closely watched aspects of the Baltimore gathering of the U.S. bishops was the discussion and vote on a long-awaited statement on the Eucharist. There was speculation whether the 26-page statement, titled “The Mystery of the Eucharist in the Life of the Church,” would address denying Communion to Catholic politicians who support abortion. It did not. The teaching document rather explained the centrality of the Eucharist and addressed the fundamental doctrine about the sacrament. 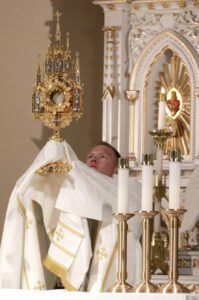 Father Lee Brokaw lifts high the monstrance with the Blessed Sacrament during a Corpus Christi celebration for the Galesburg Catholic Community on June 6. At their fall general assembly, the U.S. bishops approved a teaching document on the Eucharist and a three-year National Eucharistic Revival. (The Catholic Post/Jennifer Willems)

“Those who wanted a document that was going to condemn, or say that certain individuals should not receive Communion, are certainly disappointed,” Bishop Tylka acknowledged in an interview with The Catholic Post upon his return. “We could not write that document nor should we write that document.” Canon law, he said, gives the diocesan bishop the authority to make such determinations.

“In the end, our effort was to offer a document that invites us to appreciate more the gift of the Eucharist in the church and to hopefully deepen our understanding of that,” said Bishop Tylka. He called the document “a starting point, not a finishing point.”

He invited Catholics to read the teaching text, which is available at usccb.org. The diocese has already begun to consider how to embrace the planned eucharistic revival, he said, but emphasized the importance of going to Mass every Sunday.

“The church teaches that the Eucharist is the source and summit of our lives,” said Bishop Tylka. “For all my years as a priest I’ve said the most important thing a Catholic does is go to Mass on Sunday. So as we continue to move beyond the pandemic and get beyond COVID restrictions when it is safe to do so, hopefully we can use this effort to draw more people into the practice of participating in Sunday Mass, which is transformative.”

In an interview with The Catholic Post about his participation at the U.S. bishops’ meeting in Baltimore, Bishop Tylka said it led him to reflect not only on his role as a bishop for the Diocese of Peoria but “also the responsibility of working with my brother bishops for the good of the whole church in the United States and, for that matter, around the world.”

“I felt an awareness of the breadth of responsibility that we have to try to do what we’re called to do in governing the church, in being good teachers, and — above all — being good servants,” he said.

While he was mostly “observing and listening” during the official meetings, Bishop Tylka said he had many valuable conversations with bishops during breaks and meals.

More “seasoned” bishops offered advice on governing a diocese, he said. But Bishop Tylka is also grateful for a dinner sponsored for those who, like him, were ordained in 2020.

“We had opportunities to talk about our experiences of being a bishop over the last year,” said Bishop Tylka of the 18 new bishops who were present at the dinner.

Noting the presence of protesters in and around the hotel where the bishops were gathering, Bishop Tylka said “in many cases they had a very narrow agenda they were trying to promote” that “is not the Gospel.”

“In many cases they came across as people who were there just to tear us down,” he said.