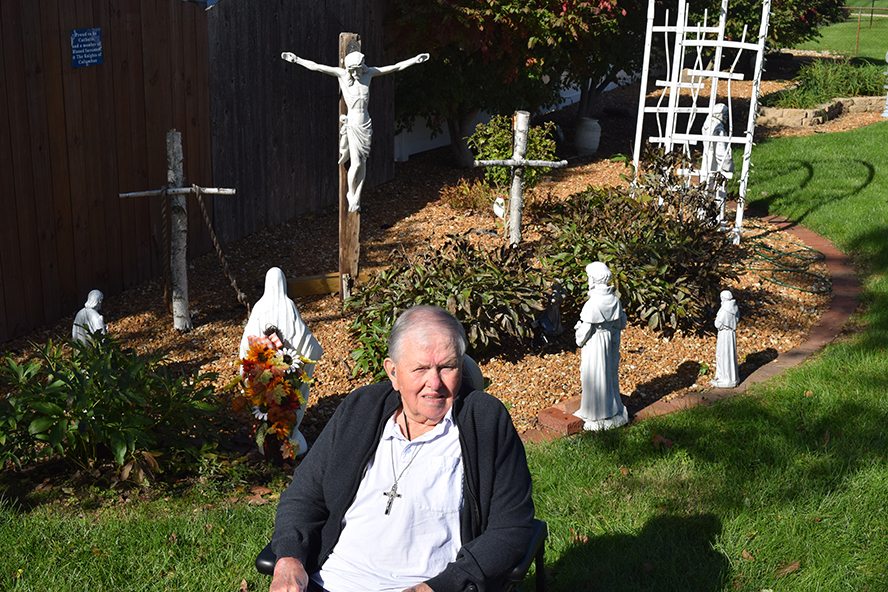 Louis Hofer of Blessed Sacrament Parish in Morton is pictured near the backyard religious display he is happy to show all visitors to his home. (The Catholic Post/Tom Dermody)

MORTON — Louis Hofer woke up one morning and had an idea to do something for Jesus.

“He’s been so good to me,” says the 82-year-old member of Blessed Sacrament Parish here.

But then Hofer already had much experience in serving his Savior, including through the Knights of Columbus and as a supply driver for the Christian Appalachian Project, assisting the poor in Appalachia. 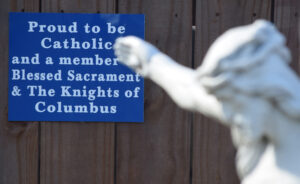 This sign hangs on a fence behind the display in Louis Hofer’s backyard. (The Catholic Post/Tom Dermody)

In this case Hofer, who suffered a stroke a few years ago and needs assistance to get around, had something else in mind — the creation of a religious display in his backyard that includes a crucifix, several statues, and a sign that proclaims “Proud to be a Catholic and a member of Blessed Sacrament and the Knights of Columbus.”

“If I can bring one person back to the church by looking at that cross and thinking about what (Christ) has suffered for mankind, for myself. . . .” said Hofer, who is happy to show his creation to all who visit, likely accompanied by an evangelizing message.

“Jesus has been there to help me through thick and thin,” said Hofer, who also enjoys spending personal prayer time near the display. When members of the parish bring him the Eucharist, he sometimes receives it outdoors at what he calls “the grotto.”

MIXTURE OF OLD AND NEW

After sharing his idea with Deacon Kevin Zeeb from Blessed Sacrament, the two ordered a corpus of the crucified Jesus from a catalogue. It was placed on a cross made from fence posts dug out by Hofer’s nephew. Crosses for the two thieves crucified with Christ were created from thick branches from his trees.

Statues in the display include one of the Blessed Virgin that has been in Hofer’s yard for nearly 50 years; St. Joseph and St. Anthony, gifts from parishioner friends; St. Thomas Aquinas, a gift from a friend who worked with him in Appalachia; and a tiny angel.

A rope wrapped around one of the crosses formerly pulled up hay on the farm where Hofer was raised near Henry, and a stone at the end of the rope is also from the old farm and was a counter-weight for a draw door. Natural flowers include peony bushes, while a vase holds seasonal displays.