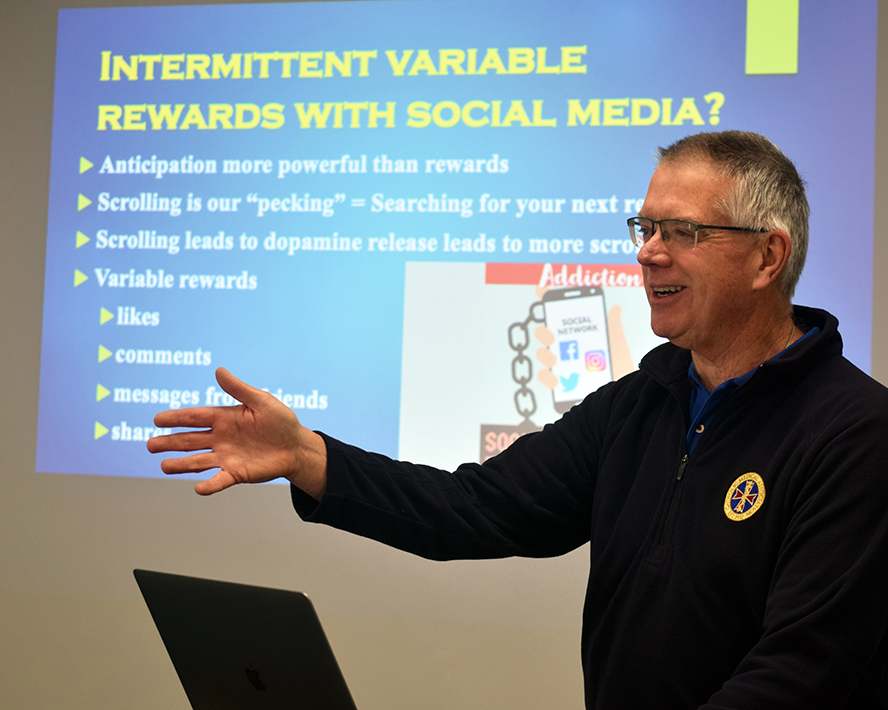 Dr. Timothy Millea, president of the St. Thomas Aquinas Guild of the Quad Cities, makes a point during his Nov. 20 presentation "We Become What We Behold: The 'Other Pandemic' of Screen Addiction" at Farrell Hall of St. Pius X Church in Rock Island. (The Catholic Post/Tom Dermody)

ROCK ISLAND — Do you stop what you’re doing — conversations, dinner, your job, even attentive driving — every time your smartphone pings a notification?

Do you check your social media constantly to see if your latest post has another “like” or comment? Do you scroll through your Facebook feed repeatedly even though little has changed in the last 10 minutes? Do you text someone in the same room?

Do hours pass while you are gaming? Are you spending money you shouldn’t gambling or shopping online? Can you not resist clicking on that pornography website?

If so, you may have a screen addiction. And you are far from alone.

TIME FOR A SOCIAL MEDIA “FAST”?

“My take is that social media should improve your life, not become your life,” said Dr. Timothy Millea, president of the St. Thomas Aquinas Guild of the Quad Cities, at the close of a morning presentation Nov. 20 at Farrell Hall of St. Pius X Church in Rock Island.

The talk, sponsored by the local guild of the Catholic Medical Association, explored the theme: “We Become What We Behold: The ‘Other Pandemic’ of Screen Addiction.” 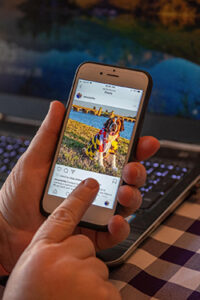 “Nobody has yet died from a lack of social media,” says Dr. Timothy Millea in recommending moderation and occasional fasts from our phones and screens. (CNS/Kevin J. Parks)

Mixing eye-opening statistics with concern for what our screen time is doing to us — and to our children and grandchildren — physically, socially, and even spiritually, Millea acknowledged that the internet and digital devices have led to great advances and are here to stay.

“Don’t get me wrong, I’m not going back to the caves,” he said. “The utility of technology and the benefits of it are there,” he added, citing how livestreamed Masses connected Catholics during the pandemic as just one example.

But as our phones and screens “permeate nearly aspect of our daily lives” with instantaneous exchanges of information, Millea called for moderation and a practice familiar to Catholics: occasional fasting.

He likened the online world to “an all you can eat buffet, and you can’t stop eating.”

“If there’s anything in the information I’ve read that seems to be the most effective” in stemming screen addiction, said Millea, “it’s learning how to fast from it. Stop doing it for a period of time.

“Nobody has yet died from a lack of social media.”

THE EFFECT ON OUR BRAINS

But even taking a break can be challenging. “You think no meat on Friday is hard? Try to get a teenager to take a media fast,” said Millea.

There is a physical reason for why it is so difficult.

While Millea, a retired orthopedic surgeon and a member of the Catholic Medical Association national board of directors, did not take a “deep dive” into recent medical research, he did explain that screen addiction has negative effects on the brain’s structure and function similar to chemical dependency disorders.

It has to do with the release of dopamine, a chemical messenger that plays a role in the feeling of pleasure. Seeing a “like” on your Facebook post or even just opening your social media app releases a bit of dopamine.

In time, as with heroin or alcohol addictions, more and more stimulation is needed to get the same effect — and the designers of the applications know it. Research shows that American adults are now unlocking their phones 160 times a day. Young adults? Twice as often.

“The want exceeds the pleasure, the enjoyment of it,” said Millea. “‘I want it. But I hate it. I can’t stay away from it.’ That is a true addiction.”

“My take is that social media should improve your life, not become your life,” said Dr. Millea

Some research indicates screen addiction — also known as “Internet Addiction Disorder” — may harm the brain’s very structure, especially in the prefrontal area. That’s the region responsible for detailed memory, concentration, and setting priorities. Because that region isn’t fully matured until one is in their mid-20s, Millea expressed strong concern about what excessive screen time is doing to our youth’s lifelong physical and mental health.

Long-term effects seen in children, according to research, include speech delay, diminished problem solving and creative thinking, increased exposure to cyberbullying and adult predators, obesity, and depression and anxiety.

WHERE TO FIND HELP

Millea pointed to several resources for further information and help, including the book “Screen Addiction: Why You Can’t Put That Phone Down” by psychiatrist and author Sister Marysia Weber, RSM. Among her points, he said, is that “healthy human development requires human interaction — not cyber or screen, but human interaction, person-to-person.”

He also frequently quoted from Peter Kreeft, a professor of philosophy at Boston College, who writes that technology is now giving us our identity, rather than our own personhood. And he warns of three casualties of the technological age — a sense of reality, time (“We all have less free time, not more”), and self-knowledge.

“We demand external fullness to cover up the internal emptiness,” writes Kreeft. “We have become masters of self-deception.”

For concerned parents, Millea recommended the Christian website axis.org for advice on how to talk to children about internet and social media use. But he said adults should heed the advice as well, noting the damage of screen addiction to families and relationships “is likely much more pervasive than we are aware.”