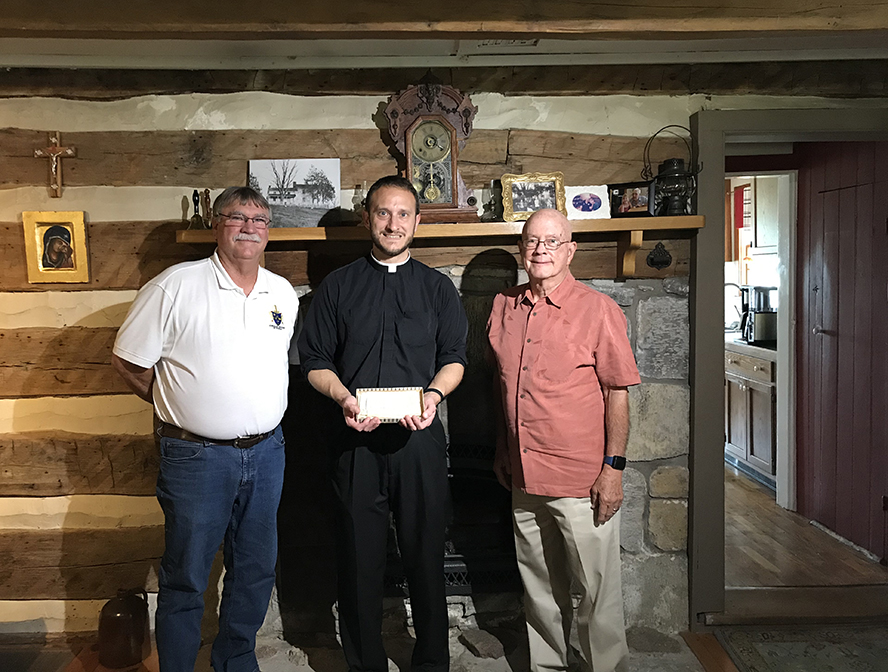 Deacon Dan Moffitt (left) stands with Father Thomas Szydlik, parochial vicar of the five parishes in the Hancock County Catholic Community, and Deacon Bob Seidler. Father Szydlik is holding the nearly 200-year-old altar cloth, which has been folded and preserved in a box. They are standing in the 1820s Moffitt home. (Provided photo)

NAUVOO — A piece of family history has been returned to Deacon Dan Moffitt, thanks to a promise kept by another permanent deacon and distant cousin from Santa Clarita, California.

That promise involves an altar cloth used in the cabin of Thomas Moffitt of Nauvoo by priests who traveled up and down the Mississippi River to bring the word of God and the sacraments to pioneer families in the area in the 1840s.

“Since there were no churches built yet, their homes would become the place that Mass was offered. A table or bureau would be used as the altar and a cloth would be placed over such,” said Deacon Moffitt, who serves the five parishes in the Hancock County Catholic Community, including his home parish of Sts. Peter and Paul in Nauvoo, and lives in Thomas Moffitt’s cabin about 75 yards from the Mississippi.

Over the summer, Deacon Moffitt and his wife, Deb, received a visit from retired Deacon Bob Seidler of the Archdiocese of Los Angeles and his wife, Pon, and discovered that they shared the same great-great-great-grandfather in Thomas Moffitt. Deacon Seidler had made a promise to return the altar cloth, given to him by his father, to its rightful home — the Catholic church in Nauvoo.

“What would cause someone to keep the small piece of fabric and pass it on for six generations? Place yourself back in the pioneer days,” Deacon Moffitt said. “Not only did you leave your homeland to come to this new place, you also left behind your church and the ability to go to Mass.

“So when finally a canoe carrying a missionary priest shows up and he goes to a pioneer’s cabin, one that is large enough to hold a few families and he sets up a small altar, it happens — above that small cloth, the simple white linen, Christ becomes present in the Most Holy Eucharist. Once again Jesus is truly present for the faithful,” he explained.

An old piece of cloth? Yes.

“But let us keep in mind, it is an old piece of cloth that Christ rested on nearly 200 years ago,” Deacon Moffitt said, adding, “Thanks for keeping your promise, Deacon Bob.”

Today, the altar cloth resides in the office of Sts. Peter and Paul Church, along with several other artifacts.

The Moffitts have been longtime teachers in Iowa and “all over the river valley.” Deacon Moffitt was ordained to the permanent diaconate for the Diocese of Peoria by Bishop Daniel R. Jenky, CSC, on May 20, 2017, at St. Mary’s Cathedral in Peoria.