After vows, Sister Clara Maria continues her ‘campus ministry in a habit’ at ISU 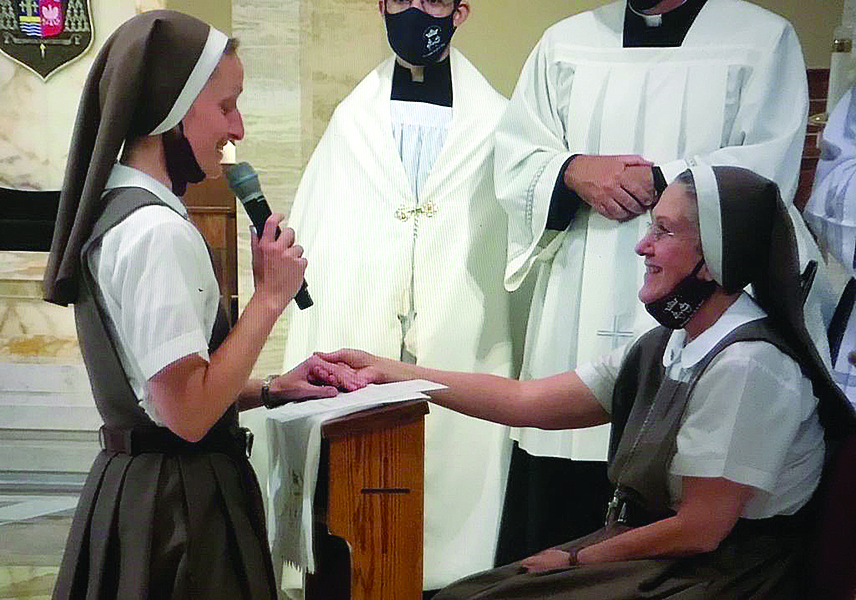 Sister Clara Maria of the Visitation and the Precious Blood of Christ smiles as she professes her perpetual vows as a member of the Servants of the Pierced Hearts of Jesus and Mary. Receiving those vows is Mother Adela Galindo, foundress. Sister Clara Maria is assistant director of the St. John Paul II Newman Center at Illinois State University in Normal. (Provided photo)

NORMAL — At one point in her life, Sister Clara Maria Malay, SCTJM, discerned that she was being called to marriage. Little did she know then that the call she had received was to be a bride of Christ as a member of the Servants of the Pierced Hearts of Jesus and Mary.

She entered the community, based in Miami, Florida, on the Feast of the Visitation of the Blessed Virgin Mary, May 31, in 2010. The feast proved pivotal to her vocation and when she professed first vows on Dec. 12, 2012, it was as Sister Clara Maria of the Visitation. 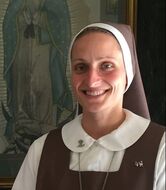 To mark her perpetual profession this year on the Queenship of Mary, Aug. 22, her religious name grew to reflect her understanding of her “vocation within a vocation” and deepening relationship with Christ. Her full religious name is now Sister Clara Maria of the Visitation and the Precious Blood of Christ.

Even when making her first profession she meant it forever, said Sister Clara Maria, assistant director of the St. John Paul II Newman Center at Illinois State University in Normal.

“The perpetual profession is such a seal and such a sign of the eschatological, the end times, of heaven,” she told The Catholic Post. “This seal is not ‘until death do us part.’ It is like you are living your eternity now.”

From Minnesota originally, Sister Clara Maria grew up in a family where her mother was the 19th of 21 children and her father was the first of 15. Despite having all those aunts and uncles — and more than 100 first cousins alone — there wasn’t one priest or religious.

“It was a different generation,” she said, noting that no one asked about vocations.

After confirmation she felt rudderless without CCD classes on Wednesday nights. It was while she was taking a world religion class in high school that she realized she didn’t know her faith as well as she wanted to and decided to start going to her parish youth group to figure things out.

“Our youth minister was awesome, God bless her. She really got us centered,” Sister Clara Maria recalled. “We had adoration every Wednesday. We had praise and worship. We had confession. Father would come and do Benediction.”

After she graduated from high school she served with the National Evangelization Team in the Archdiocese of St. Paul and Minneapolis for a year, and then applied to Franciscan University of Steubenville. There she earned a bachelor’s degree in theology and catechetics.

She also holds a master’s degree in pastoral theology from Holy Apostles College and Seminary in Cromwell, Connecticut.

At Franciscan University she gained more than knowledge, however.

“I got a Catholic culture,” Sister Clara Maria said.

Someone introduced her to the Fellowship of Catholic University Students in 2007, and she was sent to the University of Illinois in Urbana-Champaign for one school year and then to Illinois State University for one year.

It was during that second year that she knew she was being called to religious life. She was advised to spend that Lent in prayerful reflection by Father David Whiteside and then encouraged to visit the Servants of the Pierced Hearts by Father Antonio Dittmer.

“When I went in there I was like, ‘This is home,’” Sister Clara Maria said. “They were eucharistic, they were Marian, in the heart of the church, open to the Holy Spirit. I thought, ‘This is what the Lord has always spoken to me.’”

A GIFT FROM GOD

For her first assignment after she professed her first vows, Sister Clara Maria was sent back to ISU, to serve at the St. John Paul II Catholic Newman Center.

“When things opened up at the University of Illinois (in 2018), Mother asked me to go and be a superior there. She had no idea that I was there as a missionary before, so that’s totally God,” she said.

Serving at the Newman Center makes Sister Clara Maria a “fork in the road” for the students. “There’s no gray there – it’s black or white,” she says. “When you meet me on the quad it’s like, ‘She knows what she stands for.’”

When she entered religious life she gave campus ministry to the Lord, thinking she would never be involved again. But he put a bow on it and gave it back to her, she said.

“I have a huge passion for this age group and for college campus ministry, but of course doing it as a servant is different than doing it any other way,” Sister Clara Maria explained. “It’s my greater passion to be a servant because I will always be a servant.”

She said serving at the Newman Center makes her a “fork in the road” for the students.

“I made my decision. There’s no gray there – it’s black or white. When you meet me on the quad it’s like, ‘She knows what she stands for.’ And that’s what I love about doing college campus ministry in a habit,” she told The Post.

“(Students) might never step foot in a church, but they know where to find me,” she said. “It’s like meeting them where they’re at, but I don’t have to sit down and have lunch and explain the faith to them. I literally am. So my identity says so much about my mission and it calls them to think.”