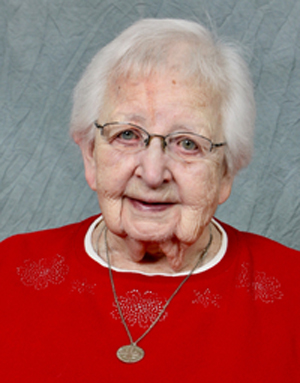 Sister Cecile (Muriel) Baer, OSB, a longtime teacher and principal, was also one of the founders of Special People Encounter Christ (SPEC) in Moline.

ROCK ISLAND — A Mass of Christian Burial for Sister Cecile (Muriel) Baer, OSB, a founding member of Special People Encounter Christ in the Quad Cities, is planned for Monday, Nov. 29, in the chapel of St. Mary Monastery. The liturgy is private, but will be livestreamed at 10 a.m. through the Facebook page of the Benedictine Sisters of St. Mary Monastery.

The daughter of Cecil and Florence (Roach) Baer, Sister Cecile was born March 12, 1928, in Peoria. She earned a bachelor’s degree from St. Ambrose College, Davenport, Iowa, and a master’s degree and certificate for learning disability teaching from the University of Illinois, Urbana-Champaign, as well as a certificate of theology from St. Norbert College, De Pere, Wisconsin.

Ministry to her community included work as assistant to the treasurer and director of transportation.

Sister Cecile will be remembered by many for her work with Special People Encounter Christ (SPEC) in Moline. She co-founded the program to provide religious education and sacramental preparation for Catholic students with special needs.

Preceded in death by her parents; brothers, Edward and Mike; and a sister, Marianne Dempsey, Sister Cecile is survived by her sister, Gloria Christian; nieces and nephews; and her Benedictine Sisters.