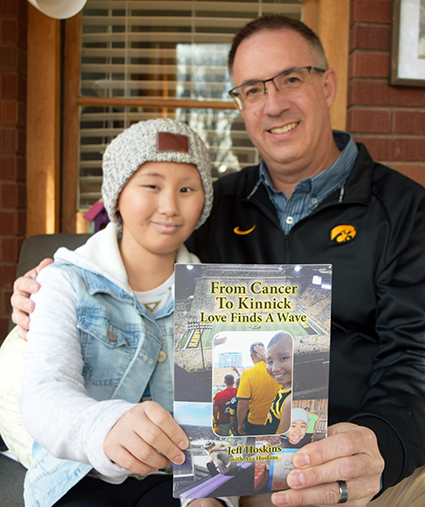 Jeff Hoskins and his daughter Ava, members of St. Pius X Parish in Rock Island, are pictured with their newly published book "From Cancer to Kinnick: Love Finds a Wave." The book shares gratitude for the support that Ava, now a freshman at Alleman High School, and the family received through her cancer treatment and recovery. (The Catholic Post/Tom Dermody)

ROCK ISLAND — Jeff Hoskins and his daughter Ava didn’t wait until Thanksgiving to give thanks to God and the many others who have accompanied them through Ava’s cancer journey.

Their gratitude is voiced throughout a newly published book written by Jeff and featuring an introduction by 14-year-old Ava — a freshman at Alleman High School who knows she is “a living miracle of God” and who her father calls “a gentle warrior and my hero.”

The book’s title is “From Cancer to Kinnick: Love Finds a Wave.” Kinnick is the name of the football stadium at the University of Iowa in Iowa City. The subtitle refers to a new tradition at the stadium. At the end of the first quarter of each home game, Iowa fans turn from the field and wave to pediatric patients and their families watching from the 12th floor of the university’s Stead Family Children’s Hospital across the street.

Ava spent much time in that hospital as she battled a rare cancer. Alveolar rhabdomyosarcoma occurs in just one out of every one million children. When Ava, then age 9 and preparing to enter fourth grade at Jordan Catholic School in Rock Island, was diagnosed with it in the summer of 2016, her disease was already considered Stage IV.

MANY STORIES IN ONE THIN PAPERBACK

“From Cancer to Kinnick” is a 110-page inspirational read that includes 22 pages of photos. The authors, members of St. Pius X Parish in Rock Island, pack a lot into this thin paperback, including:

It is gratitude for such support that led Jeff Hoskins to record the story.

“Throughout Ava’s illness I was struck by how grateful I was the whole time, how wonderful people were in helping us,” he told The Catholic Post. “When she was in remission for the first time, I thought I should write down some of that” because, he added with a smile, “I have a bad memory.”

“A LIVING MIRACLE OF GOD”

But soon Jeff — who is active at St. Pius X in several capacities and has maintained a weekly hour in the church’s perpetual eucharistic adoration chapel for 15 years — realized the story could inspire or help others. Ice Cube Press in North Liberty, Iowa, agreed, and the book was published in early September. 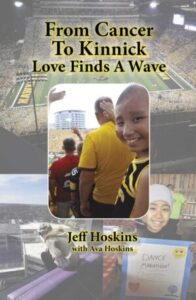 The book’s cover features an image of Ava doing the “Kinnick Wave” to pediatric patients at the University of Iowa’s Stead Family Children’s Hospital across the street from the stadium.

Ava, naturally shy but who has stood before thousands to tell her story at Dance Marathon events, is the first to voice gratitude in the book’s introduction.

“Cancer changed my perspective on life,” writes Ava, who has been in remission for 16 months. “If I could go back and change the past, of course I wouldn’t want cancer, but I am thankful for who I am because of it. I am a living miracle of God and I’m proud I get this opportunity to inspire and help others.”

Her father says the purpose of the book is fourfold: to give thanks, to give hope, to inspire the giving of love and hope, and to show that “love, peace, joy and beauty can be present even in the worst of circumstances.”

Jeff shares the emotional story with good measures of both humor and faith. An early reader told Jeff she was surprised how often she laughed while reading a book about a child with cancer.

Among those offering praise for the book and for Ava’s courage is Jacob Smithers, principal of Jordan Catholic School. He said watching Ava “continually push through all of the adversity has been an inspiration” and that she has “the biggest heart for others.” Kirk Ferentz, the head football coach at the University of Iowa, said Jeff’s writing takes readers “through how his faith, a great medical team, and the goodness of people helped him cope with the overwhelming fear and despair.”

In a chapter titled “Where Was God?,” Jeff lists the many, often unexpected, ways that God was present to his family through Ava’s illness.

“I want to give thanks to God for providing strength and peace to our family and for placing so many beautiful people in our life to help us carry the cross of a critically ill child,” he writes in a chapter called “My Hope.”

Jeff is donating all author proceeds from the book’s sale to the Stead Family Children’s Hospital. The book is available through Amazon and Ice Cube Press.