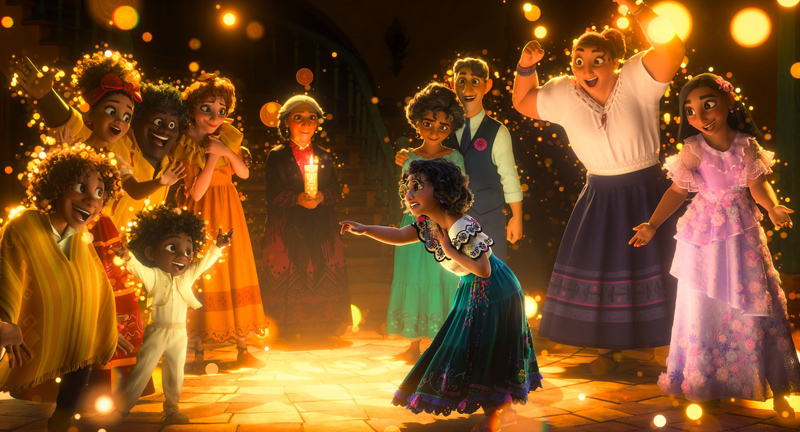 This is a scene from the movie "Encanto." The Catholic News Service classification is A-II -- adults and adolescents. (CNS/Disney)

Vivacious animated musical about a teen girl (voice of Stephanie Beatriz) living in an enchanted enclave in Colombia who is the sole member of her family not to have received a supernatural talent on her fifth birthday. As she, her strong-willed grandmother (voice of María Cecilia Botero) and protective parents (voices of Angie Cepeda and Wilmer Valderrama) continue to wrestle with this decade-old misfortune, a dark vision of the whole clan’s doom granted years before to the lass’ uncle (voice of John Leguizamo) seems on the verge of fulfillment.

Amid colorful visuals and catchy songs by Lin-Manuel Miranda, the script, penned by Charise Castro Smith and Jared Bush (both of whom co-directed with Byron Howard), delivers worthy messages about community service, cooperation and family reconciliation. Yet, while the sequestered setting includes a Catholic church whose amiable, briefly glimpsed priest is shown to be a local leader, the strong emphasis on magic, including divination, together with the dangers through which the protagonist passes, may be a source of concern for the parents of impressionable youngsters.

Nonscriptural beliefs and practices, characters in peril. The Catholic News Service classification is A-II — adults and adolescents. The Motion Picture Association rating is PG — parental guidance suggested. Some material may not be suitable for children.