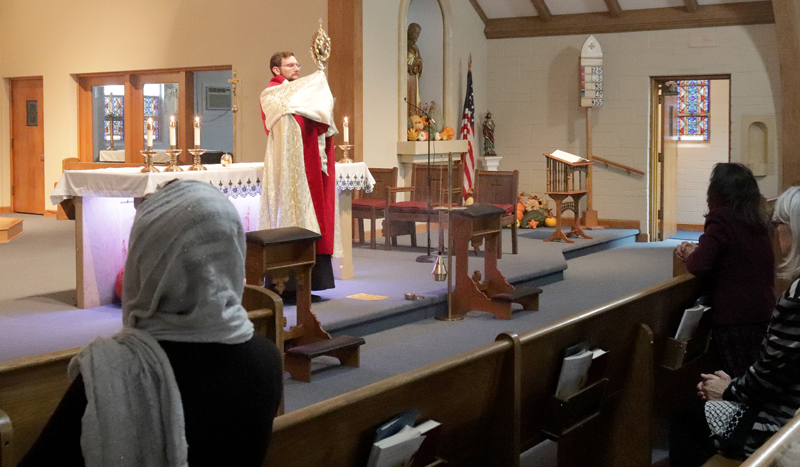 Father Alexander Millar raises the monstrance in blessing as the Holy Hour for the Peoria Diocesan Council of Catholic Women's Day of Remembrance for the Holy Souls comes to an end. It was held at St. Joseph Church in Marseilles on Nov. 13. (The Catholic Post/Jennifer Willems)

MARSEILLES — Accepting the Peoria Diocesan Council of Catholic Women’s invitation to come together for a Day of Remembrance for the Holy Souls last Saturday, a small group of women considered what is important in their lives and what the reality of their own death and eternal life with Christ means.

The day was hosted by St. Joseph Church here and their reflection was guided by Father Alexander Millar, pastor. He also celebrated Mass and heard confessions during a Holy Hour that included eucharistic adoration, the rosary, Divine Mercy Chaplet and Benediction.

“The only thing we can truly hold onto is God. . . . We must subordinate ourselves and our desires to God. That ultimately is the product of conversion. That’s what purgatory is.” — Father Alexander Millar

As an eternal being, God doesn’t experience time, so all of time is the present for God, Father Millar said. “But through our memories we make the past present, and God makes all things present to himself.”

“The product of conversion is learning to love what God loves, but ultimately what that means is we have to stop loving some things and we have to start loving other things more,” Father Millar said.

“The only thing we can truly hold onto is God. We have to put everything in relative status to God,” he explained. “We must subordinate ourselves and our desires to God. That ultimately is the product of conversion. That’s what purgatory is.”

Purgatory is the entryway to heaven, so there’s nobody in purgatory who won’t be going to heaven, Father Millar assured the group. He acknowledged that very often it doesn’t get represented that way.

The process of purification can be painful, he said, because God’s love illuminates, fulfills and transforms all things, but it also burns away that which cannot stand his presence. 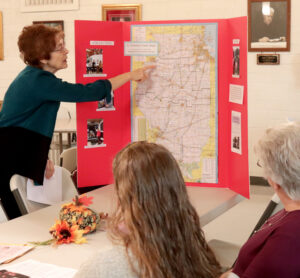 Barbara Harzman of Macomb talks about the work of the Peoria Diocesan Council of Catholic Women to support St. Nicholas Charity on Wheels, a ministry of Catholic Charities of the Diocese of Peoria. (The Catholic Post/Jennifer Willems)

But there is hope, because the “poor souls” in purgatory will know the joy of seeing God once they’ve learned to love the way they’re supposed to.

“They’re doing what we are supposed to be doing here on earth — learning not to be entangled in things outside us,” he said, but to be filled with what God makes important.

Father Millar continued to break open parts of his reflection during his homily at Mass. One of those points was to accept God’s challenge to consider whether we are using the things of this world to encounter Christ or for our own sake and comfort.

“We pray for all the souls in purgatory, that they might receive God’s grace, but let us ask the intercessions of the saints, that we might learn those lessons right now,” he said.

After lunch, Mary Ann Hughes of Westville, PDCCW president, talked to participants about why it is important to join the National Council of Catholic Women and get involved in local projects. Among them is Box of Joy, a Cross Catholic Outreach program benefiting children in need at Christmas, and St. Nicholas Charity on Wheels, a ministry of Catholic Charities of the Diocese of Peoria.