Paul Moore: Strengthening the ties that bind . . . both here and in the hereafter 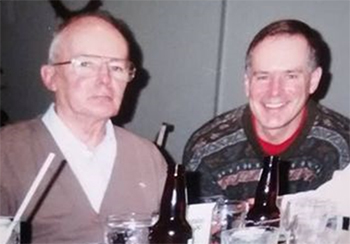 Columnist Paul Moore with his father, Tom. "I've grown closer to my father since his death," Paul writes. (Provided photo)

I’ve grown closer to my father since his death, as I reflect on his life and the legacy of his love.

Everybody warmed under the sun of Mom, but Dad could be a bit of a puzzle. Churchill’s definition of Russia as a “riddle, wrapped inside a mystery, inside an enigma,” might have applied to him.

He could be prickly, even distant, but the love would frequently peep through, not to mention the sweet, innocent joy of his laughter — mirth might be a better word. When his funny bone was tickled by something on Johnny Carson or the early “Saturday Night Live,” he couldn’t catch his breath.

Yes, there had been disappointment in his career, and crushing personal tragedy. A car accident (in which he was not at fault) had taken the life of his own father, and left Dad physically wounded and psychologically shaken.

A NEW LEVEL OF UNDERSTANDING

We didn’t always get along. To his vulnerabilities, I often exhibited the sympathy of a teenager — which is to say, not much. And I didn’t and still don’t fully appreciate the full weight of the crosses he carried. Mom once said, “You kids don’t know everything he went through.”

With God’s help, between Dad’s mellowing and my maturing, we were able to reach a new level of understanding in his final years. Mind you, he could still be challenging on the phone, as he tended to wait for me to talk, but if I tried to get things going with small talk, he might turn sardonic about the inanity of phrases like, “How’s it going?” or, “Just thought I’d touch base.”

It was different when we went to visit him in his room at Andrew’s Lodge, the assisted living home in Charlottetown, Prince Edward Island, Canada, where he moved a few years after Mom died. Here, there was always a welcome in his eyes — and in his arms.

Upon reflection, I don’t think elderly people who have lost their partners get to experience touch very often. He loved a careful hug (but watch the ear with the hearing aid!). You could just feel his spirit settling down.

After that, I’d often start with some of the same small talk (“How’s the weather?” etc.), that attracted his irony on the phone. Now that we were present with him, it seemed to be unobjectionable.

We still had to direct the conversation to an extent — but we always knew his favorite direction: Scrabble.

My wife Mary Louise would pull her chair over to where Dad was in his easy chair, I would go get a spare chair from the dining room, and we would set up the board — one with secure slots for the letters as his fingers tended to shake putting the tiles down. When he would win a game, we would celebrate his victory, though he would always say we let him win, which was never true. We could see he was secretly pleased.

Those were blessed Saturday nights at Andrew’s Lodge.

I remember the last Saturday night I saw him in that modest but cozy room (there were many later visits to hospital and hospice rooms). Usually, he would say goodbye from his chair, with some reading material in his lap waiting to occupy him after I left.

This time he came to the door of his room to watch me leave, his face looking small in those big glasses of his latter years. As I turned the corner at the end of the hall, I waved, and he waved back, his face expressionless as it often was, but the love was in the wave.

Dad’s last years and sufferings weren’t easy on him or us kids, but looking back, it was a precious gift of time for us to get to know him better. Mom — our go-between — was no longer with us, and so we would lean more on Dad, and he on us.

Before our beloved pass on, and their names are recorded in November’s Book of Remembrance, it behooves us to take every opportunity to strengthen the ties that bind. These connections can continue to deepen, death notwithstanding. As Paul wrote, “Love never ends.” (1 Corinthians 13:8)