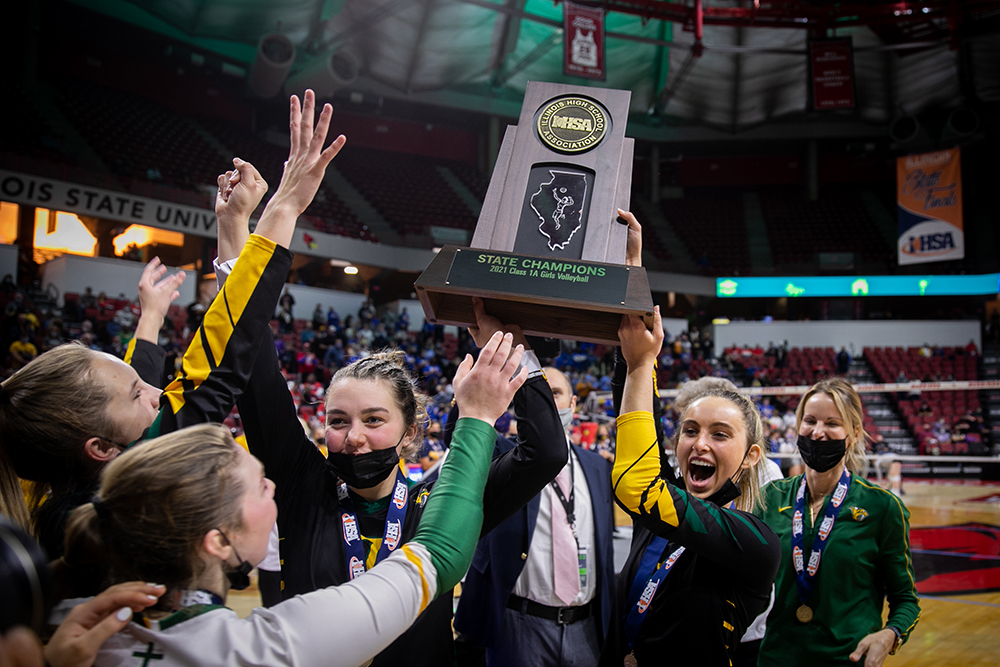 Team captains and seniors Caroline Kerr and Anna McClure carry the IHSA Class 1A state volleyball championship trophy to teammates after The High School of Saint Thomas More's 3-set win over Augusta Southeastern in the title game Nov. 13 at Redbird Arena in Normal. (For The Catholic Post/Daryl Wilson)

NORMAL — With the volleyball state championship one point away at Redbird Arena on Saturday, Caroline Kerr of The High School of Saint Thomas More knew where her set pass was going.

McClure’s spike was blocked out-of-bounds by Augusta Southeastern, giving the Sabers a 3-set win and the Illinois High School Association Class 1A state title. A celebration ensued on court that continued at the school in Champaign this week. 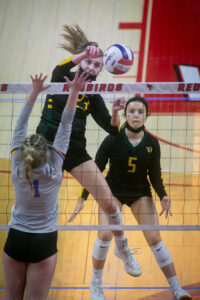 Saber sophomore Julia Johnson spikes over the outstretched arms of Southeastern’s Summer Ramsey as Claire Kennedy looks on. (For The Catholic Post/Daryl Wilson)

“It was the perfect ending,” said Kerr, who has been teammates with McClure since grade school at St. Matthew in Champaign. They had led their eighth grade team at St. Matthew to a state championship as well.

Adding to the “perfect ending” was that the final play began with a dig from another star Saber senior, libero Colleen Hege. All three recently signed letters of intent to play Division 1 college volleyball next year — Kerr at Tennessee, McClure at Ohio State, and Hege at Illinois-Chicago.

“We went out with a great win against a tough team,” said Hege. The Sabers entered the title game with a record of 40-1. Augusta Southeastern was 39-2.

“PLAYING FOR EACH OTHER”

Southeastern took the first set, 25-22. Just as in the Sabers’ semifinal win the previous morning over Freeport Aquin, they would have to come from behind.

“I’m so proud of this team,” said Coach Kelly McClure, noting both their composure under pressure and readiness to fight to achieve their goal. The Sabers would rally to take the next two sets, 25-18 and 25-17, thus making history as did the school’s 2017 team, which earned the Class 2A state title.

“They were playing for each other out there, and when you do that good things happen,” said the coach.

Sister M. Bridget Martin, FSGM — the principal of The High School of Saint Thomas More who spent most of the championship match at the front of the boisterous “Saber Pack” student cheering section — said those good things go beyond a trophy. 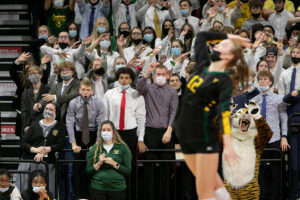 “The state title means a lot for our school,” she told The Catholic Post. “Coming out of the COVID seasons last year, this volleyball team has done a lot to bring us together and light the fire of school spirit once more at STM.”

She characterized the team as “resilient.”

“They are great athletes, very involved in the school as well, and have been determined all year to push themselves to be the best they can, overcoming all sorts of trials and adversities,” said Sister Bridget.

Anna McClure, for example, came back from an injury during last year’s COVID-shortened season when no state finals were held.

WINNERS ON AND OFF THE COURT

“It’s been a long road for me,” said Anna when asked how she felt after her winning spike. “I was filled with so much emotion. This was a goal we had from the very beginning, and it really shows that hard work can pay off.”

While the team name is the Sabers, a word they used as motivation throughout the season was “Redbird” — as in Redbird Arena at Illinois State University, site of the state finals. 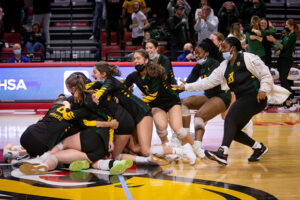 The Sabers rush the court to celebrate after the final point of their state championship win over Augusta Southeastern Nov. 13. (For The Catholic Post/Daryl Wilson)

“Every day, every game, every practice, every time we’d be together we’d say ‘Redbird,’ and here we are,” said Hege, the championship trophy resting nearby.

The state championship — as well as the school spirit and sportsmanship demonstrated by Saber supporters — was celebrated during an assembly at The High School of Saint Thomas More on Monday.

“They represent the Catholic virtues we teach here and will take with them when they leave us one day,” said Corapi. “”Having the state title here in our school is great, but knowing these young ladies are women of character and virtue is what is most important to me.”

EDITOR’S NOTE: More photos from the championship game and celebration have been posted to The Catholic Post’s site on Facebook.

Team members, coaches, and school officials pose after The High School of Saint Thomas More’s IHSA Class 1A state championship win over Augusta Southeastern at Redbird Arena in Normal on Nov. 13. (For The Catholic Post/Daryl Wilson)