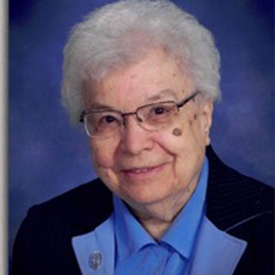 VALLEY CITY, N.D. — Sister Mary Ann Schmitz, SMP, who served as a teacher and principal at St. Patrick School in Washington for 40 years, died Nov. 8, 2021, at SMP Health-St. Catherine North in Fargo, North Dakota. She was 93.

Her funeral Mass is planned for Monday, Nov. 15, at Maryvale Convent Chapel in Valley City, North Dakota. It will be livestreamed at 10:30 a.m. and archived, along with her obituary, at lerudschuldt.com.

Born May 18, 1928, in Harvey, North Dakota, Dorothy May Schmitz was the daughter of Frank Nick and Gertrude Katherine (Strauss) Schmitz. She professed vows of consecrated chastity, obedience and poverty to God with the Sisters of Mary of the Presentation on Aug. 22, 1946, in Spring Valley.

She spent 57 years in elementary education in North Dakota and Illinois, and was a pastoral care visitor at St. Catherine North and South in Fargo for 15 years.

In the Diocese of Peoria, Sister Mary Ann served as a teacher and principal at St. Patrick School in Washington from 1963 to 2003. Parish and school officials honored her in 2011 by naming the gym the Sister Mary Ann Schmitz Gymnasium.

“The most satisfying aspect of my vocation was the 40 years I spent at St. Patrick School,” she said when she celebrated her 70th anniversary of profession in 2016. “The pastors, Father Henry Schubert, Father Robert Hughes, and Msgr. James Swaner, were dedicated to Catholic education, as were the parishioners. The response was awesome!”

Sister Mary Ann is survived by her religious community; her siblings Ray Schmitz and Linda (Elroy) Dockter, both of Bismarck, North Dakota; Harold Schmitz of Webster, South Dakota; and Emelie Schmitz of Aurora, Colorado; nine nieces and nephews and numerous great-nieces and great-nephews. She was preceded in death by her sisters-in-law Agnes and Ruth Schmitz.