WYOMING — St. Dominic Parish here celebrated the return of more than 600 singing “voices” to its church on Nov. 7 with a rededication recital showing off its newly restored pipe organ.

Quoting St. Augustine that “singing is praying twice” and noting the number of pipes on the church’s 91-year-old Hinners organ, Father John Cyr told the recital audience that “when that pipe organ is playing, all 600 voices are singing and praising the Lord.” 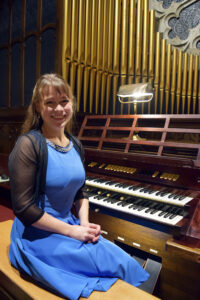 That praise was particularly majestic at the Sunday afternoon recital thanks to the performance of internationally renowned organist Katelyn Emerson.

“It’s a thrill for me to be here for such a happy event to celebrate 90 years of an instrument that’s lived through so much, that’s helped to add music to such heartfelt events, and will continue to do so for many more decades — and hopefully centuries — to come,” said Emerson, a prizewinner at organ competitions on three continents.

“A LABOR OF LOVE”

Emerson’s performance in Wyoming included 10 selections specially chosen for the occasion, featuring both liturgical and concert music. But before the recital began, Father Cyr climbed the choir loft stairs to bless the newly renovated organ with incense.

He thanked the donors who made the restoration possible as well as the skilled workers from John-Paul Buzard Pipe Organ Builders of Champaign who, in a six-month process, disassembled the organ’s intricate parts and worked to restore the original mechanisms rather than replace them with electronic components.

Father Cyr called the restoration “part of maintaining our church, the building, and our culture.”

The pipe organ, built in 1930 by the Pekin-based Hinners Organ Company, is “something passed down to us, and we have a responsibility to maintain it,” said Father Cyr.  He encouraged a deeper appreciation of music in the liturgy, which “above all is to give glory to God and lead us to holiness.”

David Brown, service department foreman for the Buzard company, said pipe organs are a long-term investment for a church and that the Wyoming project was “quite a labor of love for us.”

Noting that the organ was built by workers who have long since passed away, Brown said those who worked to restore it are keenly aware their contributions will be enjoyed by future generations.

“Pipe organs are very reliable instruments and they keep going for a long time,” said Brown. “Everything has to be engineered for a 100-year lifespan.”

“I CAN HEAR THE ANGELS SING”

But as the organ at St. Dominic Church was nearing its 90th birthday, it was beginning to lose many of its 616 magnificent “voices.”

“Little things were starting to go bad, and we were forever calling a repairman to check this, check that,” said Gene Verscha, organist at St. Dominic Church for about eight years. “It got to the point where we couldn’t keep it playing.” 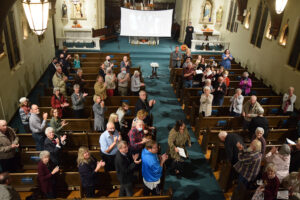 Those attending the Nov. 7 rededication recital applaud concert organist Katelyn Emerson at the conclusion of the program at St. Dominic Church in Wyoming. (The Catholic Post/Tom Dermody)

Verscha calls the restored pipe organ “a magnificent instrument.” And he gets emotional as he describes the prayerful experience of practicing with it in the choir loft, flanked by carved angels that hold the church’s ceiling lights.

“I like to come in early in the morning, before anyone shows up, to practice,” said Verscha. “I swear sometimes when I play a piece of music that’s really full, I can hear the angels sing. It chokes me up just talking about it.”

Concert organist Emerson — a Maine native who now resides in Champaign — paid homage to those angels by including Sigfrid Karg-Elert’s “Saluto Angelico” among her recital selections. It was one of several pieces that were written in the 1920s and 1930s “when this instrument was being built,” she told the audience.

Other selections included Franz Schubert’s “Ave Maria” as well as works by Bach, Mendelssohn, and contemporary composers such as Rachel Laurin and Jean Langlais.

The rededication recital, which also featured Michael Proulx on cello, was broadcast live and has been archived for future viewing on St. Dominic Parish’s Facebook page and on YouTube.