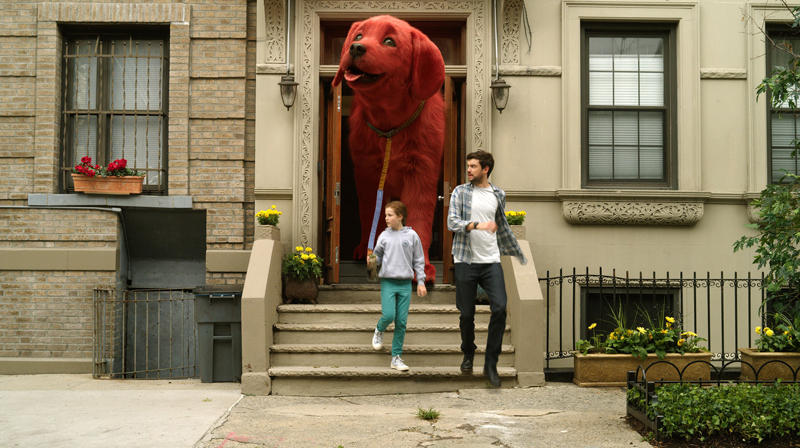 Darby Camp and Jack Whitehall star in a scene from the movie "Clifford the Big Red Dog." The Catholic News Service classification is A-II -- adults and adolescents. (CNS/Paramount Pictures)

Slapstick humor is the order of the day in this silly but mostly harmless adaptation of a series of children’s books by Norman Bridwell, the first of which was published in 1963.

Director Walt Becker mixes computer animation and live action to tell the story of a lonely New York City preteen (Darby Camp) who adopts a little red puppy from an eccentric animal rescuer (John Cleese) only to have her love for the dog magically transform it, overnight, into a giant. With her mom (Sienna Guillory) away on a business trip, the pooch’s metamorphosis presents an outsized problem for her babysitting slacker uncle (Jack Whitehall). Yet, even as they contend with the pet-averse superintendent (David Alan Grier) of the lass’ apartment building and a scheming CEO (Tony Hale) who wants to claim his biotech firm brought about the massive growth spurt, the duo can count on the help of a diminutive schoolmate (Izaac Wang) who has a secret crush on the protagonist.

Underlying themes include the need to accept those who are different, the dangers of bullying and the value of self-confidence. But these messages are not put across very adroitly and are offset by some potty gags and a bit of vaguely rude dialogue.

A few scatological jokes, a couple of instances each of mild swearing and crass talk. The Catholic News Service classification is A-II — adults and adolescents. The Motion Picture Association rating is PG — parental guidance suggested. Some material may not be suitable for children.