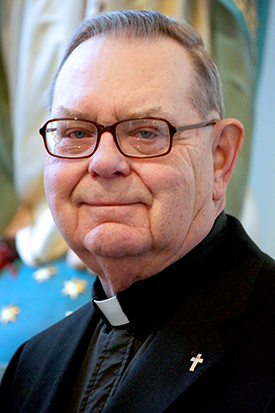 UTICA — A funeral Mass will be offered at St. Mary Church here at noon on Thursday, Nov. 11, for Msgr. James J. Swaner, a senior priest of the Diocese of Peoria who served Catholic parishes and schools in LaSalle County for five decades.

Msgr. Swaner, a former principal of Marquette Academy in Ottawa whose priestly life was mostly spent as a parish pastor, died on Monday, Nov. 8, 2021, at OSF HealthCare Saint Francis Medical Center in Peoria.

Bishop Daniel R. Jenky, CSC, will be principal celebrant and homilist at the funeral Mass.

Visitation will take place at the church beginning at 9 a.m. on Thursday and continuing until shortly before the funeral Mass.

Burial will be at St. Columba Cemetery, Ottawa.

Born March 25, 1936, in Chicago to Joseph and Emily (Railis) Swaner, he attended Catholic elementary schools in Cicero and Berwyn before entering Quigley Preparatory Seminary in Chicago. He continued his studies for the priesthood at St. Mary of the Lake Seminary in Mundelein and later at St. Paul Seminary in St. Paul, Minnesota, where he would earn a bachelor’s degree in philosophy and a master’s in history.

He was ordained to the priesthood by Bishop John B. Franz at St. Mary’s Cathedral in Peoria on May 28, 1961.

His first assignment was as parochial vicar at St. Columba Parish in Ottawa. He would also teach Latin and social studies at Marquette High School, where he was named assistant principal in 1968 and principal the following year.

In 1973, he was named pastor of Annunciation of the Blessed Virgin Mary Parish in Eagle Township and St. Mary Parish in Kangley. He would later add duties as pastor of Sts. Peter and Paul Parish in Leonore. He also served as pastor of Resurrection Parish, LaSalle (1984-1993); Sacred Heart Parish, Dimmick (1991-1993); St. Mary Parish, Wenona, and St. John Parish, Lostant (1993-1994); and St. Patrick Parish, Washington, (1994-2003), with a brief period as administrator of St. Luke Parish, Eureka.

In 2003, Msgr. Swaner became pastor of St. Mary Parish in Utica, where he would serve until his move to senior status in 2016. He guided the parish in its recovery from a devastating tornado in 2004 that left eight dead in the community and damaged the century-old St. Mary Church.

He continued to live in Utica — in a house across the street from the church — in his retirement years, and taught religion part-time at Holy Family School in Oglesby.

On the occasion of the 60th anniversary of his priestly ordination this May, Msgr. Swaner reflected on serving so much of his priesthood in LaSalle County.

“I’ve got them married, I’ve got them buried,” he told The Catholic Post. “I hardly am able to fill in anywhere that I don’t have some I’ve baptized or married, or someone who says, ‘I remember what you said at my mother’s funeral.'” He found joy in “being there for my people, always.”

A former vicar of the Pekin Vicariate, Msgr. Swaner was named a prelate of honor with the title of monsignor by St. John Paul II in 2000.

Msgr. Swaner has no survivors. He was preceded in death by his parents and a sister, Geraldine Hensel.

Memorials may be made to St. Mary Parish in Utica or Marquette Academy in Ottawa.