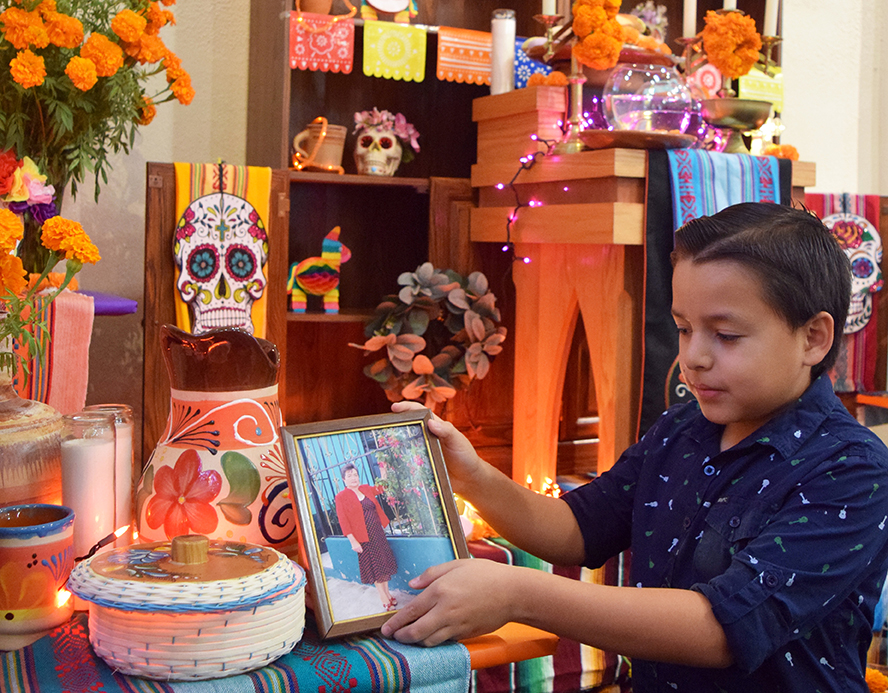 Diego Sanchez-Gomez places a photo of his late grandmother, Rosa Gomez, on the Day of the Dead altar at St. Mary Church in Bloomington. (The Catholic Post/Tom Dermody)

BLOOMINGTON — Members of St. Mary Parish here have a striking reminder to pray for the souls of the deceased during November with the construction of a tall, colorful Day of the Dead altar to the left of the sanctuary. 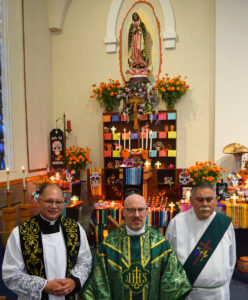 “The bright colors and the flowers show us there is a tomorrow of happiness and hope in Jesus and his resurrection,” said Father Fabian Rua, a Salesian priest from Colombia who was assigned to the parish as parochial vicar this summer.

Day of the Dead altars are popular throughout Mexico, Latin America, and in regions of the United States with Spanish-speaking populations. With help from Rosie Romero and the diocesan Office of Hispanic Ministry, Father Fabian erected the display for the first time at St. Mary Church in preparation for an evening Mass in Spanish on All Souls’ Day, Nov. 2.

In between Masses in English and Spanish on Oct. 31, the display — located beneath an image of Our Lady of Guadalupe — was viewed, photographed, and contributed to by attendees of both liturgies. Parishioners were invited to place photos of deceased loved ones on the special altar, with most doing so prior to Tuesday evening’s Mass.

In addition to the photographs, symbols found on the altar include candles and electric lights as reminders of how the church and its sacraments light the road to heaven; a mound of salt representing how the deceased have seasoned our lives; skulls as a symbol of our mortality; loaves of “Pan de Muerto,” the bread of the dead; and a crucifix to show that God is the center of our lives. The primary flower found on Day of the Dead altars is the orange marigold.

“The central part of the celebration is joy and happiness,” said Father Fabian. “Its main object is eternal life.”

EDITOR’S NOTE: More photos of the Day of the Dead altar have been posted to The Catholic Post’s Facebook page.