Paul Moore: The value of a single Mass, and the importance of a smile 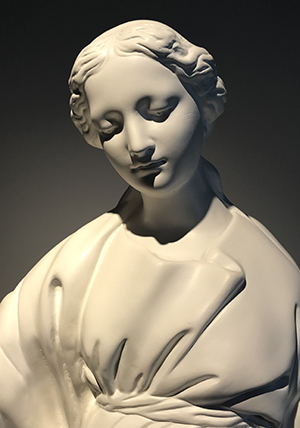 The statue of Our Lady of the Smile at the National Shrine and Museum of St. Thérèse in Darien is a replica of the statue with the healing smile that Thérèse had a vision of on Pentecost Sunday, 1883. (Provided photo/Paul Moore)

My wife and I attended the monthly first Friday Mass at Snyder Village Retirement Community in Metamora on Oct. 1, the feast day of St. Thérèse, who promised to spend her Heaven letting fall a shower of roses. The Mass celebrant was Father Vien Van Do of St. Mary of Lourdes Parish, Germantown Hills, and St. Mary, Metamora.

After Mass, Father Vien related a priest’s testimony that he had seen posted on YouTube about the value of a single Mass. Someone suggested to the priest that he must have come from a strong Catholic family. No, the priest said, in fact his Dad had been a confirmed agnostic — if not a downright atheist — until a visit one day to his local butcher shop.

The setting was Eastern Europe amid the destitution and destruction following World War Ⅱ. The poverty was most keenly felt by the young and elderly. An old woman entered the butcher shop and asked if she might have a bit of meat. She had no money, but was going to Mass, and would offer her Mass for the butcher’s intentions. Would he consider that worth something? The butcher teased the lady about the value of her offering, but she wasn’t bothered. She’d be back.

When she returned after Mass, the future priest’s father also happened to be in the butcher shop. At this point, he joined the butcher in “gentle” mockery of the woman’s faith. Gee, wonder how much that Mass was worth? Shall we put it to the test on the scales?

The butcher put a little meat on the scale and glanced up at the reading . . . but there was no reading. He added a little more meat. Still nothing. He kept adding meat until finally he put a whole leg — of lamb — on the scale, and at that point the scale finally recognized that there was something there. (It should be mentioned that before and after, the scale worked perfectly.)

At this point, the butcher and the man who would become the priest’s father were no longer laughing or teasing. As a matter of fact, that father went home and turned his life around, and became the father of the priest telling the story, as well as another son who also became a priest.

That’s just a tiny fragment of the worth of a single Mass.

Then there’s the value of a smile.

“OUR LADY OF THE SMILE”

Recently, I had the honor of interviewing Sister Michelle Fernandez, SCTJM, for “Catholic Conversations” on Catholic Spirit Radio (airing at 3 p.m. Oct. 23 and 24; accessible afterward as a podcast at catholicspiritradio.podbean.com). 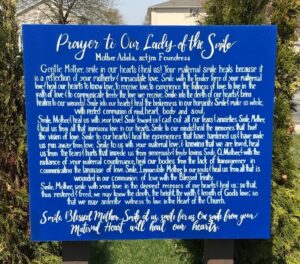 The “Prayer to Our Lady of the Smile” is seen at the St. John Paul II Newman Center at Illinois State University in Normal.

Sister Michelle is the director of Catholic Charites for the Diocese of Peoria. She says that sometimes while visiting around the diocese in the St. Nicholas Charity on Wheels van, if donations were low, she might not have much more to offer than a bar of soap. However, she relates — with modest hesitancy — that she has more than once been told her smile is as important as anything else she brings. In return, she often receives a smile from the person she is ministering to that in turn ministers to her all the way home.

Sister Michelle adds that another source of her own personal healing has been a prayer-poem written by the foundress of her order, Mother Adela Galindo of the Servants of the Pierced Hearts of Jesus and Mary. The prayer, “Our Lady of the Smile,” was inspired by the expression that St. Thérèse of Lisieux saw on the face of the statue of Mary in her home when she was miraculously healed of illness in 1883.

The last line is of the prayer is, “Smile, Blessed Mother . . . . Smile at us, smile for us. One smile from your Maternal Heart will heal our hearts.” (For the full prayer, click here.)

Of course, Mary would be the first to point out you can’t compare the value of even her smile with that of the Mass. The former redeems a moment in time; the latter redeems humanity for all time.

Still, while comparing values is wholly inappropriate, I can’t believe the Lord would take offense at discussing the Mass and a loving smile in the same breath. As St. Mother Teresa said, “Peace begins with a smile.”

Paul Thomas Moore is a Catholic commentator and singer-songwriter. He and wife Mary Louise attend St. Mary of Lourdes in Germantown Hills. He can be reached at paulthomasmoore@hotmail.com.