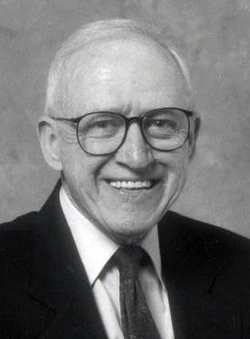 A funeral Mass will be offered at 10 a.m. on Friday, Oct. 22, at St. Joseph Church in Peoria for John J. Gibson, who served as development director for the Diocese of Peoria from 2005 until his retirement in 2019.

Gibson, who was also a past president of the Archbishop Fulton J. Sheen Foundation board and chairman of The Catholic Post board of directors for more than a decade, died on Monday morning, Oct. 18, 2021, at his Peoria residence. He was 89.

Father Eric Bolek will celebrate the funeral Mass. Visitation will take place one hour prior to the Mass at the church, 103 S. Richard Prior Place.

He is also survived by one brother, Patrick Gibson of Peoria, and many nieces and nephews. He was preceded in death by his parents, one sister, and four brothers.

A U.S. Army veteran who served during the Korean Conflict, he later would become vice president of personnel at Keystone Steel and Wire Co. and then president and CEO of the Peoria-based Employers Association. In his capacity as diocesan director and development and stewardship, Gibson also coordinated the Annual Diocesan Appeal for many years.

He was a 50-year member of the Knights of Columbus, 3rd Degree Spalding Council No. 427, and was active in the St. Vincent de Paul Society for decades. In 2007, his character and accomplishments were recognized by Pope Benedict XVI with the Order of Knighthood of St. Gregory the Great. Gibson also served his community in a variety of ways, including with the Peoria Historical Society, the Downtown Rotary Club, and as a member of the Youth Farm Board and various other Peoria city boards and commissions.

Memorial contributions may be made to the Archbishop Fulton J. Sheen Foundation, TAPS Animal Shelter in Pekin or the repair and maintenance of St. Joseph Church in Peoria.