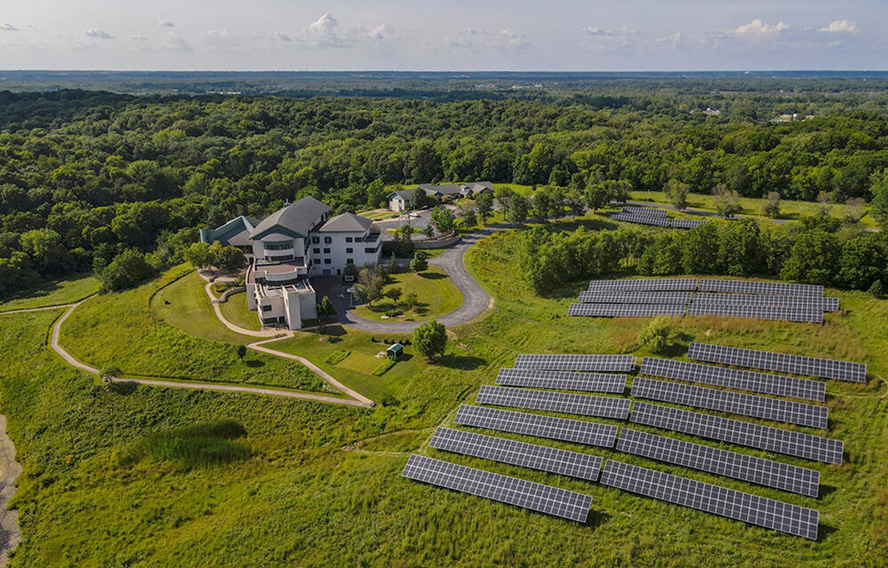 Solar panels are seen in this aerial view of St. Mary Monastery in Rock Island. The monastery will be the site of an outdoor interfaith "Season of Creation prayer service on Saturday, Sept. 24. (Provided photo)

ROCK ISLAND — It wasn’t very long after God created the earth that he set the sun in the sky “to govern the day.” Now that same sun is providing the energy needed for the Sisters of St. Benedict of St. Mary Monastery to minister to God’s people and care for his creation.

With the help of Illinois Solar for All, the Rock Island community was able to install two Solar Photovoltaic arrays on their grounds. The 1,148 solar panels have the potential to provide up to 98 percent of the annual electrical needs for the monastery and as much as 80 percent of the power for Benet House Retreat Center. 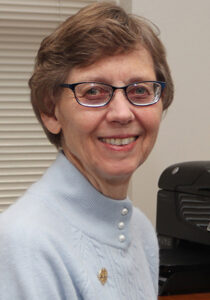 “Along with Pope Francis, we are concerned about keeping the earth — our common home — a place of life and beauty for all peoples, both now and into the future,” said Sister Susan Hutchens, OSB, prioress of St. Mary Monastery in Rock Island.

Sister Susan Hutchens, OSB, prioress, flipped the switches for both, with the help of Sister Sheila McGrath, OSB, on Sept. 24.

“Along with Pope Francis, we are concerned about keeping the earth — our common home — a place of life and beauty for all peoples, both now and into the future,” Sister Susan said. “Any actions we can take to do our part in this endeavor profit not only us, but the world.”

It came at some sacrifice for the 26 members of the Benedictine community, however.

The monastery obstructs much of the view of the panels that supply electricity to the building, although the array for Benet House can be seen as people approach the monastery, she said.

“Did it impede some of our view? Yes, it did. We had to weigh that,” Sister Susan told The Catholic Post.

“But we can always face the lake. We can turn around the other way,” she said. “It’s such a gorgeous view on most of the property that it was one of those things. We all agreed, this was for the environment. It’s just a view.”

Sister Susan said the Benedictines had taken long looks at fossil fuels in the past, but the conversation about solar energy started in earnest in September 2018, after finance director Jeff Streit came to work at the monastery.

With his leadership, they investigated participation in a new program called Illinois Solar for All. The initiative offered solar renewable energy credits (SREC) to eligible non-profit organizations, which made the investment feasible.

The evolving application process involved a lot of work, including proving that the Benedictine community was making a contribution to the area.

“So we had letters written from various organizations where we had contributed time and energy, things like the Rock Island Food Pantry and preparing evening meals,” Sister Susan said, adding that the Sisters have also served on the boards for Special Persons Encounter Christ and Project NOW, a community action agency.

They didn’t make the first application but persevered, partnering with Day and Night Solar, Tri-City Electric Co., Mid-American Energy, Central Road LLC, and the City of Rock Island. Sister Susan said that during a hearing on the proposed project, no one objected and one neighbor jokingly asked if they could run a wire to his house.

The second application was approved and construction started during Holy Week at the end of March 2020. While they had hoped to have everything in place in June to catch the summer sun, delays in shipping and other aspects of the project pushed completion to the end of September.

“We are extremely excited to transition to renewable energy and feel blessed to collaborate with the partners needed for this investment,” Streit said. “This has been a long process, making the project even more rewarding.”

Because there are sunny days and overcast days, a net metering process is used. If St. Mary Monastery and Benet House produce more energy than they use, the electric company will owe them something at the end of the year.

“We have it monitored on our computer so we can sit here each day and keep track of it,” Sister Susan said.

There hasn’t been much of an impact on the wildlife on the monastery grounds, although the deer were hesitant at first due to noise of construction. She said they have returned and the Sisters can hear the coyotes at night.

“The geese are still migrating over our lake because they always fly this direction,” she told The Post. “We haven’t lost any birds over the summer — we’re still seeing all of them.”

One major concern was making certain the solar panels did not reflect the sun in such a way as to obstruct the view of pilots approaching and departing the nearby Quad Cities International Airport. Those who installed the panels consulted the FAA and used GPS to position each one.

This is the latest in a long line of actions the Benedictines have taken to “care for our common home.”

The monastery uses geothermal heating and cooling, and has LED lights inside and out, Sister Susan said. In the retreat center, there is a “green” elevator that doesn’t use oil or a hydraulic system, and pipes collect rain water and direct it to a garden to curb erosion, among other things.

They continue to consider little things they can do each day to save energy.

“If you keep it before your eyes, you become more conscious,” Sister Susan said.