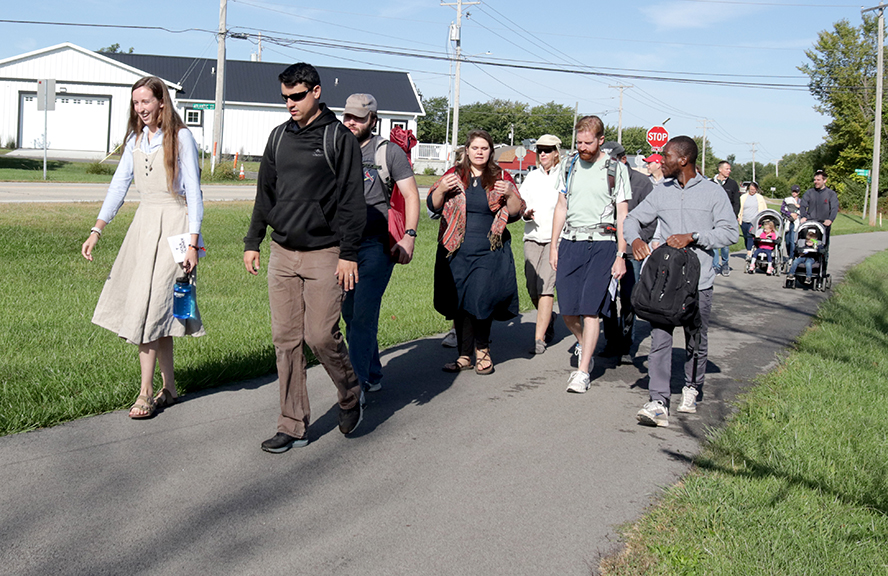 Taking the lead on Sept. 25 is Blake Brooks, one of the organizers of "On the Way with Fulton Sheen," which took pilgrims from Princeville to the tomb of Fulton Sheen at St. Mary's Cathedral in Peoria. He said the goal was to help people grow in their devotion of Sheen and renew their own spiritual lives. (The Catholic Post/Jennifer Willems)

To anybody walking or biking along the Rock Island Trail in Peoria on a recent weekend, it might not seem all that extraordinary for a group of about 25 people to be making the journey together. It’s what they couldn’t see that was important.

“The way is simple — it’s just a lot of walking. But what it does and where it goes in spiritual terms is always a discovery,” said Ben Gottemoller, one of the organizers for a pilgrimage called “On the Way of Fulton Sheen.” 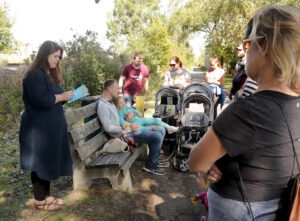 After walking nearly 3 miles on the Rock Island Trail Sept. 25, pilgrims “On the Way of Fulton Sheen” stopped near Pioneer Parkway in Peoria to rest and reflect. Here, Taryn Watkins reads from “Finding True Happiness” by Fulton Sheen. The chapter she chose was “The Way to Happiness.” (The Catholic Post/Jennifer Willems)

Sponsored by Soul Desire, an apostolate whose mission is to help people integrate their faith into every area of life, the pilgrimage started in Princeville on Friday, Sept. 24, and ended at the tomb of Venerable Archbishop Fulton J. Sheen at St. Mary’s Cathedral in Peoria on Sunday, Sept. 26. Along the way there were opportunities for prayer, spiritual conversations, confession and Mass, as well as fellowship.

It was inspired by the life of Fulton Sheen, the El Paso native who went on to be a world-renowned media pioneer, author and teacher. Excerpts from his writings were used for reflections throughout the walk.

“Fulton Sheen is needed now more than ever. We need his intercession and his example,” said Blake Brooks, one of the founders of Soul Desire and the person who handled logistics for the pilgrimage. “We wanted to do something to promote his cause.”

He also cited Sheen’s evangelism and his ability to communicate the faith to the world.

Brooks and Gottemoller, accompanied by a few friends, made the 23-mile pilgrimage last year. They decided to do it again, but open it up. 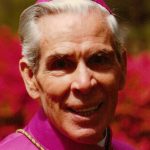 Some of the “Catholic connections” they made last year were incorporated this time. One of them was the “Tunnel of Echoing Praise,” where Route 6 passes over the Rock Island Trail. As the pilgrims walked through this year they sang “Tantum Ergo” and heard their voices fill the space for all to hear.

Another highlight of Saturday morning was a short visit to a Marian shrine at the home of Mike and Peggy Pauli. The image of the Pilgrim Mother was made available by Tim and Molly Olsen of the Schoenstatt movement in central Illinois and they invited the pilgrims to take it with them as they continued their journey to the tomb of Fulton Sheen.

Those who made the pilgrimage included babies in arms and strollers, toddlers, and adults at all stages of life. One thing that was noticeable on Saturday morning was that the groupings of people changed as the pace varied to accommodate different needs.

“There was a lot of freedom,” said Brooks, a former seminarian for the Diocese of Peoria who is now married and the father of a young daughter. “It seemed like there were a lot of interactions throughout the group.” 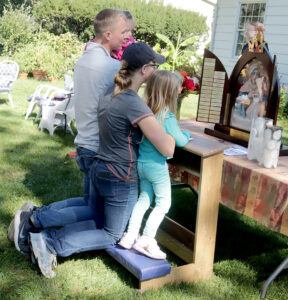 Sam and Leah Mangieri pray with their daughters before the Pilgrim Mother Shrine, which was made available to the pilgrims “On the Way of Fulton Sheen” by Tim and Molly Olsen of the Schoenstatt movement.The pilgrims were invited to carry the shrine as they continued their journey to St. Mary’s Cathedral and the tomb of Fulton Sheen. (The Catholic Post/Jennifer Willems)

“I did have some very good conversations with all ages. For me, that was a joyful and enriching experience,” said Father Thomas Dunton, CSJ. “There was a movement and that movement between people was a healthy sign of the fact that we’re not just in our own clique, as it were, but we’re actually together on this pilgrimage and want to know one another.”

Those who participated in “On the Way of Fulton Sheen” had varying experiences of being on pilgrimage, too.

It was the first time for Luke Cottingham, a middle school language arts teacher at St. Jude Catholic School in Peoria.

“I just came with an open heart,” he said, noting that as he reflected on the portion of the trail he walked with his wife, Hannah, and their children, John Paul and Edy, “I just felt so much peace — almost serenity — just thinking about all the little conversations I had with various people. Often you’re paired with people you weren’t expecting to talk to but it was very comfortable.”

It was also filled with God, Cottingham said.

“The conversations always seemed to center back on God and I think that was the major focus,” he said. 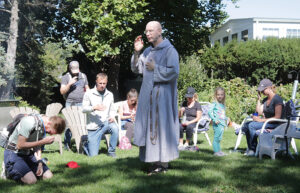 As the visit to the Marian Shrine comes to an end, Father Thomas Dunton, CSJ, blesses the pilgrims, who still have a little more than a mile to walk until their lunch break at Donovan Park in Peoria. (The Catholic Post/Jennifer Willems)

Fulton Sheen’s use of media inspired him to start a podcast for Soul Desire. New episodes are posted monthly.

“He inspires me as a teacher and encourages me as a father. I feel that close kinship,” Cottingham said of Fulton Sheen. “I see him as a spiritual father guiding me.”

Father Thomas also cited Sheen’s work as a teacher and said he has gleaned some insights and truths from studying his works.

His own devotion to Sheen and the involvement of so many young people made the pilgrimage “a very attractive package,” he said.

“If the young people are recognizing Fulton Sheen and the holiness in people’s lives, then our future is being built very solidly,” Father Thomas told The Post.

“WE CAN BE READY”

Taryn Watkins, an art teacher at St. Philomena School in Peoria, has made some major pilgrimages, including the Camino de Santiago through France and Spain. “On the Way of Fulton Sheen” takes its inspiration from that pilgrimage.

“I think every Catholic should go on pilgrimage at some point to be reminded that this is not our home — heaven is our home,” she said. “We are on pilgrimage. We are on a journey toward that home.” 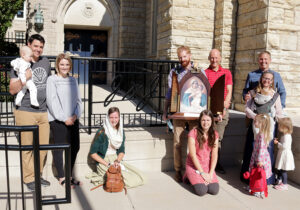 Standing just outside St. Mary’s Cathedral in Peoria, where Fulton Sheen now rests in the Lady Chapel, the pilgrims prepare to attend Mass on Sunday, Sept. 26. After the liturgy they would walk on their knees to the tomb and pray together for an emotional end to their journey. (The Catholic Post/Jennifer Willems)

Watkins has done several paintings of Fulton Sheen. Among them is one she created for Coadjutor Bishop Louis Tylka that shows Sheen gazing at Jesus and Jesus, in the Eucharist, gazing back at him.

Reflecting on Sheen’s daily Holy Hours has been “incredibly important” to understanding him, she said, adding that it has influenced her own prayer life.

Gottemoller, a software engineer at Caterpillar Inc. in Peoria, has come to know and love Sheen and said the delay in Sheen’s beatification was painful — especially for Bishop Daniel R. Jenky, CSC. The image of Bishop Jenky opening his hands and letting that go is deeply moving for him.

“We don’t know how long it will be, but we can be ready,” Gottemoller said. “The pattern of pilgrimage can continue to grow according to the grace working in the hearts of anybody who wants to, and they don’t have to wait on us.”