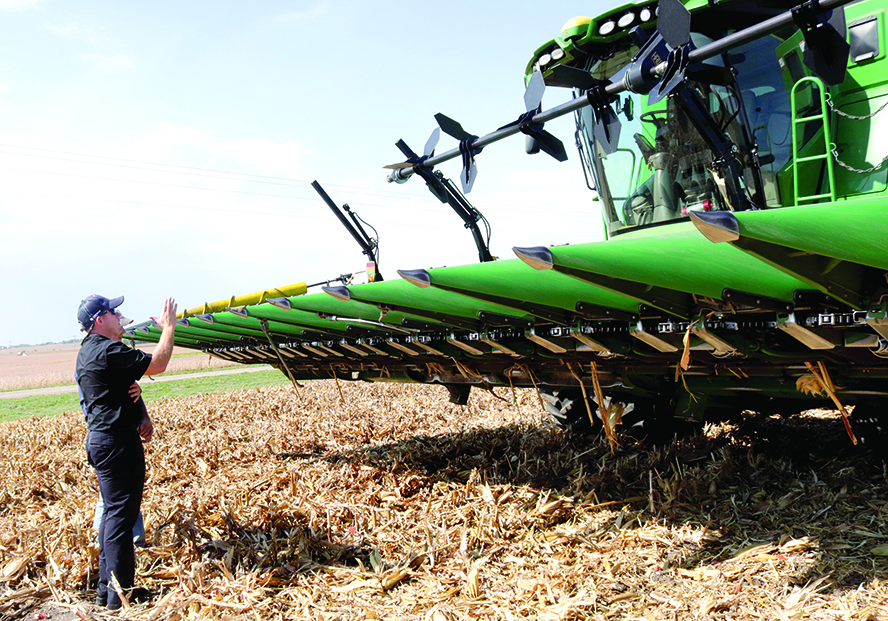 While the goal is to keep the combine moving during harvest, brothers Tim and Todd Main of Altona made an exception so Father Lee Brokaw could bless their equipment Sept. 24. Perhaps more important than blessing the machinery is the prayer he offers for the farmers, that they might remain close to God. (The Catholic Post/Jennifer Willems)

ALTONA — Dwarfed by a combine that could harvest 12 rows of corn at a time, Father Lee Brokaw raised his arms and blessed the machine as he had five others at the request of his parishioners in Galesburg and Abingdon. The blessings extend far beyond the farm equipment, however. 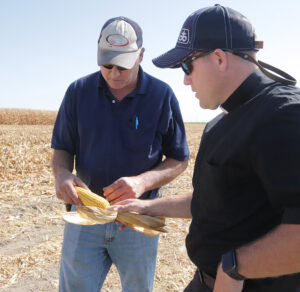 Father Lee Brokaw visits with Tim Main, who is based in Altona and farms with his brother, Todd, before blessing their combine. Tim and Julie Main sent their children to Costa Catholic Academy in Galesburg and Julie is active at Immaculate Heart of Mary Church. Tim gives back by being involved in the Knox County Farm Bureau. (The Catholic Post/Jennifer Willems)

He is well aware of the intimate connection between farming and faith since he grew up on his family farm near Raritan. His uncles also farm in Raritan Township, Henderson County.

As farmers are kept busy harvesting corn and soybeans over the next month, that prayer and reliance on God are more important than ever, he said.

“The one thing that farming teaches men and women who are involved directly in production agriculture is that everything in our life is a gift,” he said. “We don’t make the earth. We’re called to till and to keep it just like we hear in Genesis. We’re called to be stewards with God.”

As with so much else in the Christian life, that means being receptive to God without being controlling, according to Father Brokaw, pastor of Corpus Christi, Immaculate Heart of Mary and St. Patrick in Galesburg and Sacred Heart in Abingdon.

“The farmer, whether you’re involved in grain farming or livestock production — those who raise cattle or hogs or sheep — it’s the same thing. You can do everything you can, everything you know how to do, and then there’s factors in nature . . . that you can’t always predict,” he explained.

“When things don’t necessarily go as planned you can’t become discouraged or depressed,” Father Brokaw said. “You go back to the drawing board and you try it again next year. You realize that life is a journey and a farm operation is as well. You have to adapt and change just as nature does.”

That’s the way they cooperate with the will of God, he said.

While being on the farm and riding with farmers is life giving for him, Father Brokaw told The Post that it opens doors to faith sharing and ministry that don’t happen in other ways.

“I think when a priest can meet people on their turf and in their comfort zone, people are more willing to open up,” he said. “When you can meet someone in their everyday life, you can see how Jesus desires to meet us on the road of where we’re at right now.”

“In farming, their tractor, their combine, their cattle pasture is so much a part of who they are. When you enter into that with them, it shows them that you’re willing to meet them there.” — Father Lee Brokaw

On a recent Friday afternoon, after blessing the combine of brothers Tim and Todd Main as they were harvesting corn between Altona and Cambridge, Father Brokaw was approached by someone who wanted to be received into the Catholic Church. Finding time to “finish the classes” was difficult, however, because he worked a second job.

“Come to me this winter,” Father Brokaw said. “We’ll take care of it.”

“He was willing to come up because there weren’t walls up, there weren’t a lot of people around,” he said. “In farming, their tractor, their combine, their cattle pasture is so much a part of who they are. When you enter into that with them, it shows them that you’re willing to meet them there.”

Historically the church and farming have always been linked, according to Father Brokaw. Even in times of trouble the response has been one of great faith, with vigils held in church to pray for God’s deliverance and blessing, he said. It wasn’t unusual to take Jesus to the fields in a eucharistic procession.

He favors a return to some of these traditions, including rogation days, to strengthen that connection between faith and farming.