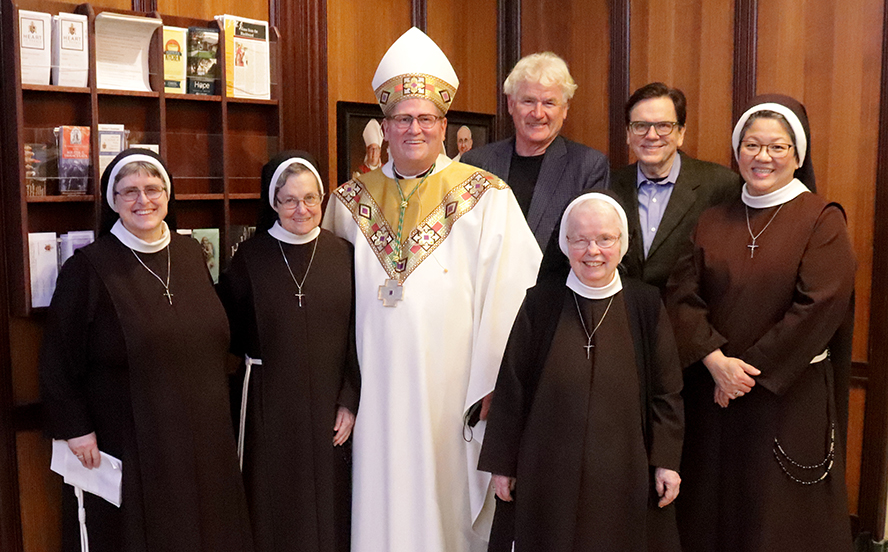 To hope in Jesus is to hope in God’s plan of love for each and every one of us, and that hope does not disappoint, Coadjutor Bishop Louis Tylka said during the Spirit of Hope Mass for the Relief from the Suffering of Cancer on Oct. 2.

“We hope for the miracle that will continue our life here, but our greater hope is the hope that God has won for us — everlasting life,” he shared during his homily. “There is no pain or sadness or tears. There’s joy — joy of living in God’s loving embrace.” 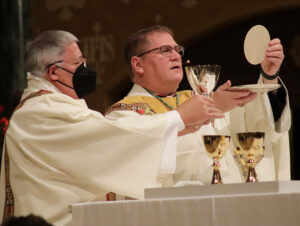 Deacon Joe Knapp, manager of pastoral care at OSF Saint Francis Medical Center in Peoria, assists Bishop Louis Tylka at the altar of St. Mary’s Cathedral at the Spirit of Hope Mass on Oct. 2. OSF HealthCare helped to coordinate the liturgy “for the relief from the suffering of cancer.” (The Catholic Post/Jennifer Willems)

The Mass, which was celebrated at St. Mary’s Cathedral in Peoria, grew out of a conversation Bishop Tylka had with Dr. James McGee, medical director of the oncology service line for OSF HealthCare, last Christmas. “Absolutely,” he responded when asked to offer a Mass for those living with and battling cancer.

As people entered the cathedral, they were serenaded by world-renowned tenor and recording artist John McDermott. Accompanied by guitar, he set a gentle tone for the evening with songs like “Make Me a Channel of Your Peace (Prayer of St. Francis),” “How Great Thou Art” and “You Lift Me Up.”

His final offering before Mass started was “Let’s Live Today,” which was commissioned by Dr. McGee. Co-written by Kevin Hearn of the Canadian rock band Barenaked Ladies — a cancer survivor — the song had its world premiere at a “Spirit of Hope” benefit in Peoria in 2008.

“I thought that cancer patients deserved to have a song,” Dr. McGee told The Catholic Post after the Mass. “I was very, very happy with it. To me it’s just a gift, and it’s for others to get (something) from it more than anything else.”

In his deeply personal homily, Bishop Tylka talked about watching his mother, Norma, and youngest sister, Mary Lou Bryant, die of pancreatic cancer 31 years apart, and what he learned about hope and peace in the intervening years.

Just 18 when his mother was diagnosed with cancer, Bishop Tylka said they were told she wouldn’t survive a week. She lived 10 months, however — long enough to see him enter the seminary.

“As an 18-year-old, I had a lot of feelings about what transpired over those 10 months,” he said. “I obviously wanted my mom to live. I prayed for a miracle. And I know that the doctors and the nurses and the people who cared for her tried their best, but the dreaded disease seemingly won the battle.” 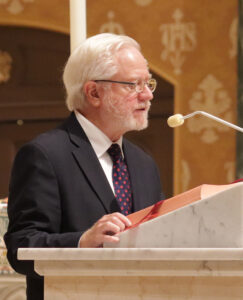 Because of his faith, he believed in the newness of life promised by Jesus, but it didn’t take away the pain and sadness he felt. “My heart broke,” Bishop Tylka said.

Ultimately it was his faith in Jesus that brought him peace.

“I’m not sure, looking back on that experience, that I enjoyed the gift of hope that I do now, but I’ve learned it,” he said.

When his sister, Mary Lou, called to tell him that she had been diagnosed with pancreatic cancer he thought, “Here we go again.”

“I know I’m going to die,” she told Bishop Tylka. But as he walked with her through the last six months of her life, the conversations were different.

Mary Lou Bryant would pass away six weeks before Bishop Tylka was ordained the coadjutor bishop of the Diocese of Peoria on July 23, 2020.

“She was able to do so — and I watched her do so — with a trust and hope in the Lord which I will never, ever forget,” he said.

Bishop Tylka noted that the lives of everyone gathered in St. Mary’s Cathedral that night had been profoundly touched by cancer.

“But I would suggest that they are more profoundly touched by the love of Jesus,” he said.

“Because I’ve had these experiences, I’ve learned through the gift of faith that my parents first instilled in me and that my sisters and the church have nourished, I’ve learned to hope that I can put my life, as they have, into Jesus’ hands,” Bishop Tylka said. “When we hope in the Lord, hope is not disappointed.”

EDITOR’S NOTE: Click here to view an archived video of the Mass and homily.