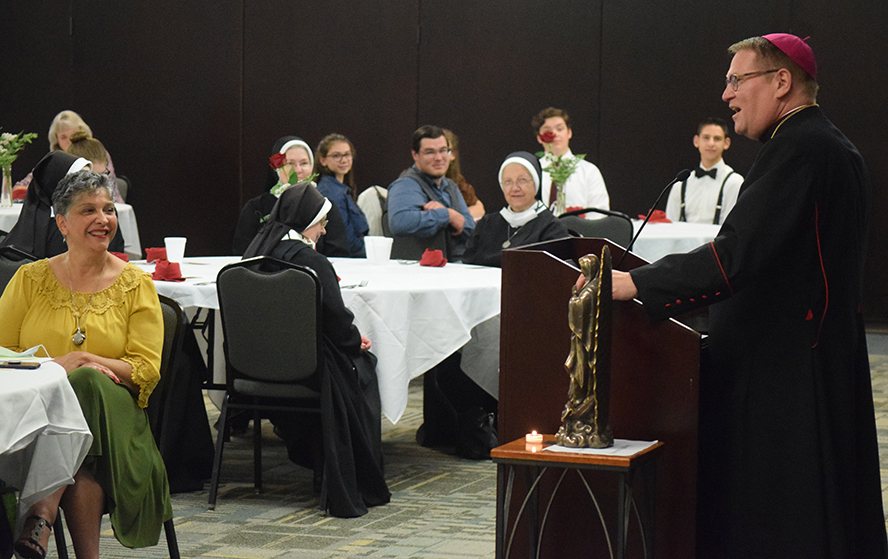 It is fair to say that Kristi Hofferber, the keynote speaker at the Diocese of Peoria’s Respect Life Dinner on Oct. 2, is “exceptional.” 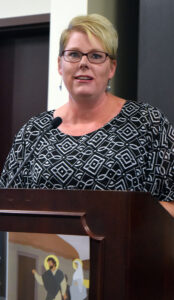 The adoption advocate and pro-life counselor from the St. Louis area challenges the thinking not only of pro-choice advocates but many in the pro-life community as well.

“Those who are conceived in rape and incest also deserve to live,” says Hofferber. And with good reason. “My birth mother was a victim of her own father,” she told a rapt crowd of nearly 100 at the Spalding Pastoral Center in Peoria.

“In cases of rape and incest, we’re often looked at as ‘the exception,’” Hofferber said, noting that 60 percent of those professing to be pro-life cite such cases as exceptions in their opposition to abortion. In her presentations, Hofferber “puts a face” to her message “that each and every life has value no matter how they were conceived.”

“I have my work cut out for me” in changing minds and hearts, she admits, but knows that “God can take the biggest of messes and turn it into a message.”

Hofferber, now 43, was placed for adoption after her birth and was raised by a loving family. When she discovered the circumstances of her birth 13 years ago, “everything changed” — except the continuing love shown by her adoptive parents. Hofferber was able to meet her birth mother and learned that the abuse she endured lasted for years and led to five additional pregnancies. Four were aborted and the other ended in a forced miscarriage through physical abuse to hide the proof of what her birth mother’s father had done.

Hofferber said the abortion option, far from giving her birth mother freedom, “allowed her to be a victim over and over again. She deserved better.”

Feeling called by God to help women facing difficult choices, Hofferber earned a master’s degree in social work and is now an adoption advocate, sidewalk counselor at a large abortion facility in Fairview Heights, outreach coordinator for Coalition for Life St. Louis, and a member of the Lutherans for Life speakers’ bureau. She is also active in “40 Days for Life,” now underway nationwide, including in Champaign and Peoria.

She and her husband, who is also adopted, have two adopted children, ages 17 and 6.

“I don’t agree with the sinful act that created me,” she told the dinner crowd. “But there is no doubt in my mind that I am created in God’s image, for his divine purpose, and that he has given me this voice to share this story.” She told the group that by making exceptions in the case of rape and incest, “we’re being inconsistent. A life is a life is a life. We’re all valuable.”

She shared the details of her story at a Respect Life Dinner that in some ways was an exception to tradition in the diocese. Last year’s dinner was canceled because of COVID-19, ending a string of 38 consecutive years of the fundraising and educational event on Respect Life Sunday weekend. The venue was changed to the Spalding Pastoral Center, and it was the first dinner without Charles Owens of Henry as master of ceremonies. He was in attendance, but introducing the program was Cecilia Soñé, coordinator of Respect Life Ministry for the diocese. 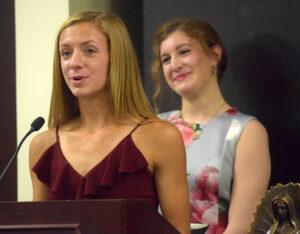 Maci Cave (foreground) and Clare Kube, co-presidents of Peoria Notre Dame Teens for Life, explained the mission and activities of their club. (The Catholic Post/Tom Dermody)

“It’s such a blessing to see all of you after spending so much time without us seeing each other,” said Soñé in welcoming remarks.

Also offering greetings prior to the dinner was Coadjutor Bishop Louis Tylka, who thanked attendees “for all you do in your parishes and in your lives to promote a greater respect for life.”

Bishop Tylka also shared a personal story about his own family’s openness to life. After his parents had five daughters, his mother then endured three miscarriages. While she was reluctant to attempt another pregnancy, a trusted neighbor woman suggested Mrs. Tylka should “try one more time and God will bless you.”

“So my Mom and Dad did, and here I am,” said Bishop Tylka. The audience responded with applause.

Among those present were about a dozen members of the Peoria Notre Dame Teens for Life club. Club co-presidents Clare Kube and Maci Cave explained the club’s mission and activities. “Our goal is to provide students with accurate and unbiased information and arm them with the knowledge they will need through apologetics to combat hatred with love,” said Kube.

Closing the evening with prayer was Father William Miller, episcopal vicar for respect life. He said that while there have been changes through the four decades of Respect Life Dinners, they’ve shared common themes of encouragement and inspiration. He said the room reflected “the face of the pro-life movement” in the diocese — the “veterans who have been in the battle for a long time” and the youth, the movement’s future.

“We need both,” said Father Miller, who then led prayers for the conversion of those who promote and profit from abortion, for expectant mothers in difficult circumstances, for the healing power of God’s mercy “for the wounds of past choices,” and for all who given much in the pro-life cause, including Jan Smith, founder of the Family Resources Center, and her husband Pete.

Father Miller led the crowd in a prayer to St. Joseph. During this Year of St. Joseph, the U.S. bishops have asked Catholics to look to his example as the protector of Jesus and Mary during Respect Life Month.

EDITOR’S NOTE: More photos from the Respect Life Dinner have been posted to The Catholic Post’s site on Facebook.