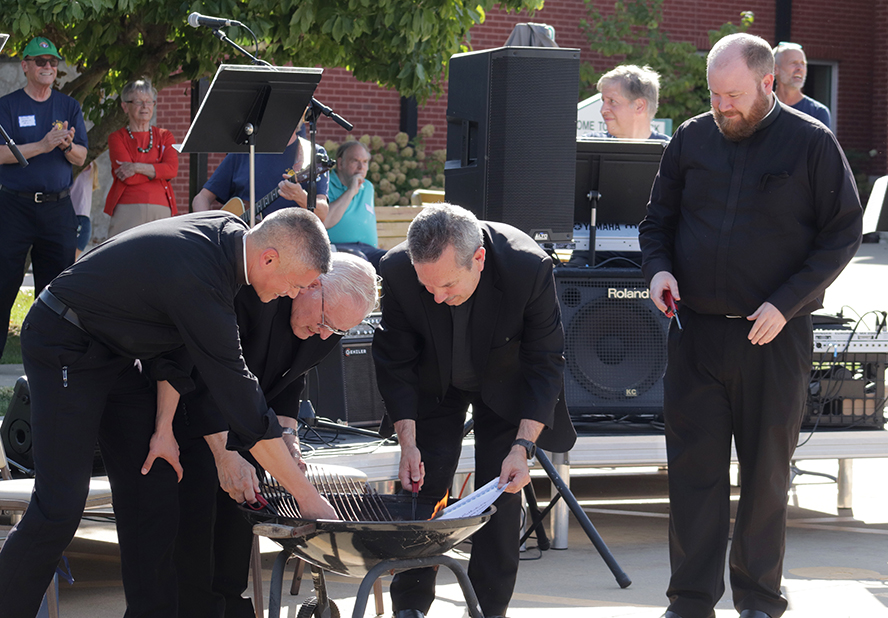 Father Joel Phelps, former parochial vicar at St. Patrick Parish in Urbana, stands by with another lighter as the certificates symbolizing the loan from the Diocese of Peoria are burned by (from left) Father Anthony Co, Father George Remm and Father Joseph Hogan on Sept. 26. The debt was paid down more than a year ahead of schedule. (The Catholic Post/Jennifer Willems)

URBANA — When parishioners started raising funds to expand and renovate St. Patrick Church here, parish leaders said there should be a party with dancing in the streets when the debt was finally paid off.

That’s exactly what happened last Sunday, as Father Anthony Co, pastor; Father George Remm, pastor emeritus; and Father Joseph Hogan and Father Joel Phelps, former pastor and parochial vicar, respectively, set fire to certificates representing the loan agreement with the Diocese of Peoria. The ceremony and party — with the promised dancing, food and games — followed a Mass and blessing of the new music space in the church. 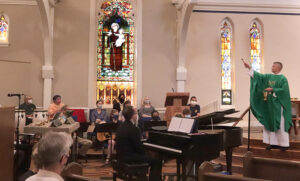 Father Anthony Co sprinkles holy water to bless the musicians, instruments and new music space at St. Patrick Church in Urbana on Sept. 26. The renovated space and refurbished Steinway, played here by Dr. Frank Gallo, were made possible with a gift from Kay and Graham Evans. (The Catholic Post/Jennifer Willems)

The theme was “Keep the Fire Burning!” and that applied to more than the parish debt, according to trustee Pat Justice.

As with all parishes, COVID has kept people away, Justice explained, but “St. Pat’s has got a spirit that’s incredible. . . . So let’s keep that fire burning.”

In his remarks at the end of Mass, Father Co added his own encouragement.

“We want to see the fire of God’s love burning brightly now and forever,” he said.

The dream was a long time coming.

Father Hogan credited his predecessor, Father Remm, for getting a group of parishioners together when they celebrated the parish’s centennial in 2003.

“When he retired, I kind of took over. I got even more parishioners together and it really was a dream that continued to blossom in a wonderful way,” Father Hogan told The Catholic Post. “I’ve never had a parish so exuberant about a project.” 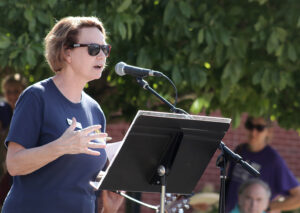 Parish council president Mary Tate started the debt-burning ceremony at St. Patrick Church in Urbana by thanking God for what had been accomplished, those had a hand in planning the Sept. 26 celebration, and parishioners for their generosity. “We want people to know we’re moving forward,” she told The Catholic Post. (The Catholic Post/Jennifer Willems)

A new gathering space connected the church and existing parish hall and offices.

Justice said the building project became a little more expensive because the old church needed a new roof to prevent water damage in the new addition. She added that it isn’t possible to expand a basement once the facility is built, so they decided to make it larger. And with so much construction taking place in Champaign and Urbana at the time “the price of concrete went through the roof.”

A “bridge loan” from the Diocese of Peoria helped them pay for construction as pledges were paid.

To pay down the $2 million debt that remained, the parish saved money where it could. At Christmas last year, Father Co called people and asked if they would be willing to “get us over the hump” so St. Patrick could be free of debt. They all said, “Yes.”

“People were really exceptionally generous,” he said. “They gave substantial amounts to get us past that amount and we got it done. It was a pretty exciting thing to get ahead of our schedule.”

Father Co added that a gift from Kay and Graham Evans made it possible to renovate the music space, and unexpected gifts helped to pay off the rectory debt and have the party at no cost to parishioners.

It also opens the door to new opportunities, he said.

“It allows us to start thinking about how we use our resources to do training for evangelization, for developing leaders, and growing deeper in our faith,” he told The Post. 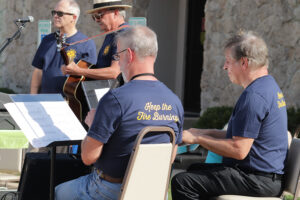 Wearing t-shirts with the theme for the celebration printed on the back are members of St. Patrick Parish’s own Cath’lic Boys, who finished their set with “Here Comes the Sun.” Music, burgers and hot dogs cooked by the Knights of Columbus, and games followed the debt-burning ceremony Sept. 26 at the Urbana parish. (The Catholic Post/Jennifer Willems)

During the Mass parishioners also offered sustained applause for Msgr. Doug Hennessy, co-pastor from 1977 to 1986, and Father Luke Spannagel, pastor from 2017 to 2019, who were unable to attend — sort of. As the liturgy was ending Father Co produced a life-sized cutout of a smiling Father Spannagel for photo opportunities.

Providing leadership for the celebration were Mary Tate, president of the parish council, and Mardia Bishop. They thanked God for what had been accomplished and parishioners for their generosity, creativity, compassion and love.

In addition to tunes played by local DJ Diane Ducey, St. Patrick’s own Cath’lic Boys entertained people with classics such as “Light My Fire” by The Doors and “Here Comes the Sun” by The Beatles.

For those who needed a little extra help to “Keep the Fire Burning!” bottles of a special hot sauce made for the occasion were available for parishioners and friends to take home.

EDITOR’S NOTE: More photos from the celebration at St. Patrick, Urbana, have been posted to The Catholic Post’s site on Facebook.