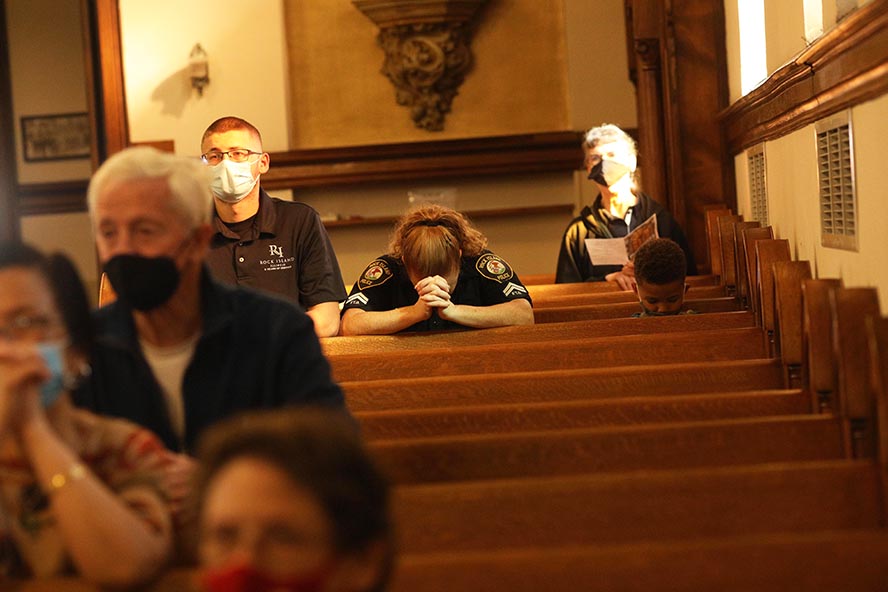 ROCK ISLAND — Prayers of gratitude for — and the protection of — law enforcement professionals, firefighters, EMTs, and all who risk their lives for others’ safety were voiced during a Blue Mass celebrated Sept. 26 at Sacred Heart Church here. 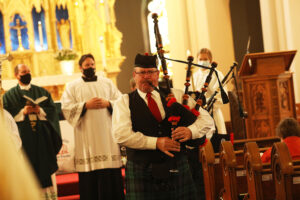 Derek Grant plays “Amazing Grace” on the bagpipes at the close of the Blue Mass at Sacred Heart Church in Rock Island on Sept. 26. He was one of three members of the Black Hawk Pipes & Drums of the Quad Cities who played as Mass ministers processed in and out of the church. (Provided photo/Kelly Haertjens)

“This Mass is our opportunity to give thanks to you for your service, to recognize it, and to ask God’s blessing on you and to strengthen you as you continue your good work for us in our community,” said Father Luke Spannagel, pastor, in opening remarks.

The Mass takes its name from the blue-colored uniforms used by many in protection services. It was offered specially for the deceased members of local law enforcement, fire departments, and other first responders and their families.

“In emergency situations, you often encounter people in a very difficult moment, sometimes in their worst moment,” Father Spannagel said to first responders in his homily. “You are called to help as needed, to bring about the right and the true and the good in those moments. It’s incredibly noble work.”

A fire engine with a U.S. flag hanging from its extended ladder greeted parishioners and guests in the parking lot as they arrived for Mass.

At the close of Mass, Father Spannagel offered a series of blessings, including of:

Police officers had various roles in the liturgy. A trio from the Black Hawk Pipes and Drums of the Quad Cities played during opening and closing processions, which also featured an Honor Guard from the Allouez Council of the Knights of Columbus.

EDITOR’S NOTE: More photos from the Blue Mass have been posted to The Catholic Post’s site on Facebook.