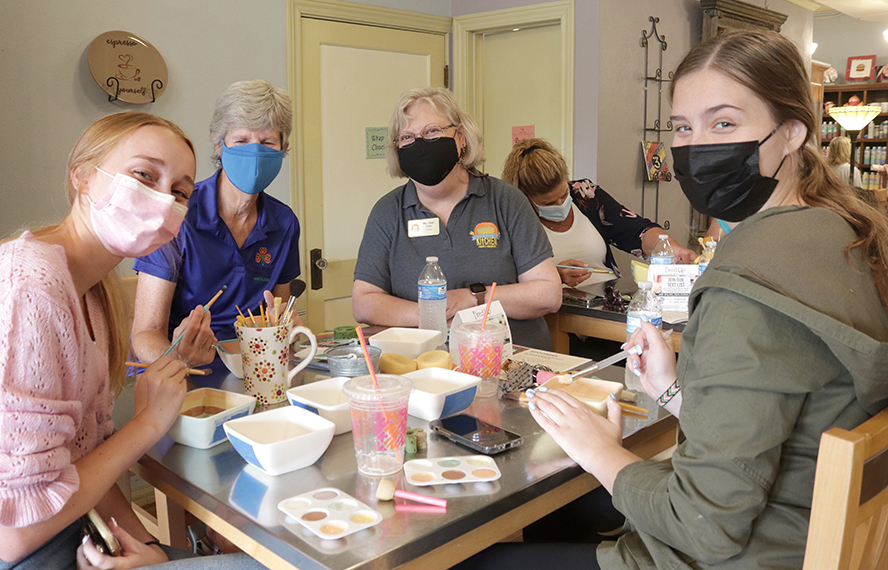 Claire Crone (center), director of Sophia's Kitchen in Peoria, looks in on Sadie Pierce, Jane Seiler and Marlee Curtis who are putting their artistic skills to work as part of the Spoonful benefit for Sophia's Kitchen. In all, 200 bowls were painted Sept. 13-14. (The Catholic Post/Jennifer Willems)

PEORIA HEIGHTS — Who says you can’t help people and have fun at the same time?

Budding Picassos, Van Goghs and Rembrandts gathered at Fired Up Pottery here on Sept. 13-14 to paint bowls that will be sold to benefit Sophia’s Kitchen, the sandwich program located at St. Joseph Church in downtown Peoria. Among those taking their turn with a paint brush were Coadjutor Bishop Louis Tylka and Franciscan Apostolic Sisters Merlinda Marco, assistant kitchen manager, and Sister Beth Agawa. 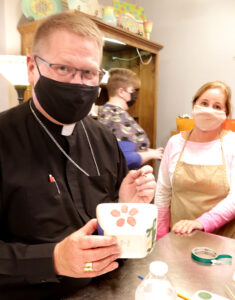 As Kati Faletti, owner of Fired Up Pottery, looks on, Coadjutor Bishop Louis Tylka works on his contribution to the Spoonful benefit for Sophia’s Kitchen in Peoria. The bowls were to be sold along with soup made by volunteer cooks. (The Catholic Post/Jennifer Willems)

In addition to the decorated bowls, 10 homemade soups are being sold by the quart as part of the Spoonful benefit, which continues on Sunday, Oct. 3. People may pick up the soups they reserved from 10 a.m. to 2 p.m., and take a tour of Sophia’s Kitchen and historic St. Joseph Church next door at 103 Richard Pryor Place, in Peoria.

“I’ve been thinking about this for a couple of years,” said Claire Crone, director of Sophia’s Kitchen, as she watched about 28 people turning the white bowls into works of art, during the second of four sessions. “A cousin of mine in Wisconsin had done something up there with her school and I just thought, ‘That is just brilliant.’ So I wanted to bring this kind of fun atmosphere down here.

“Of course, COVID stopped us last year, but this year we really need the fun, don’t we?” Crone said.

She credited Sophia’s Kitchen supporter Rita McCarthy for handling the many details that went into making it a safe, successful event. She also expressed gratitude to Fired Up owner Kati Faletti for donating the studio fees of $30 per person to the soup kitchen and being so accommodating.

Faletti, who had served on the board for Catholic Charities of the Diocese of Peoria at one time and sent her children to St. Vincent de Paul School and Peoria Notre Dame High School, said she was happy to do it.

“Honestly, COVID has been horrible. But people have been so supportive of my husband and I, the community,” she said. “I felt like it was a good chance for us to give back.”

The 200 bowls were completed with help from volunteers and students from Peoria Notre Dame. It took 24 hours for the bowls to dry and 30 hours for them to bake in the shop’s three kilns. 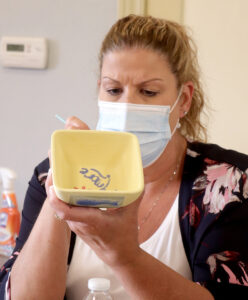 Beth Wharton painted the word “amore” or “love” at the bottom of the bowl she made as part of the Spoonful fundraiser for Sophia’s Kitchen in Peoria on Sept. 13. Each artist painted two bowls and could keep one, but many chose to donate both to be sold. (The Catholic Post/Jennifer Willems)

Each bowl bears the logo of Sophia’s Kitchen.

This is the main fundraiser for Sophia’s Kitchen this year, which missed every fundraiser last year due to the pandemic. They also missed the celebration for the 10th anniversary of their move to St. Joseph’s parish hall from Sacred Heart Church in Peoria.

Numbers dropped while government programs helped with rent and utilities, but Crone said they are seeing increasing need as that assistance is ending.

The soups that are being sold for Spoonful were made by volunteers from ingredients purchased for the occasion, so nothing was held back from the nearly 300 people who are served every day.