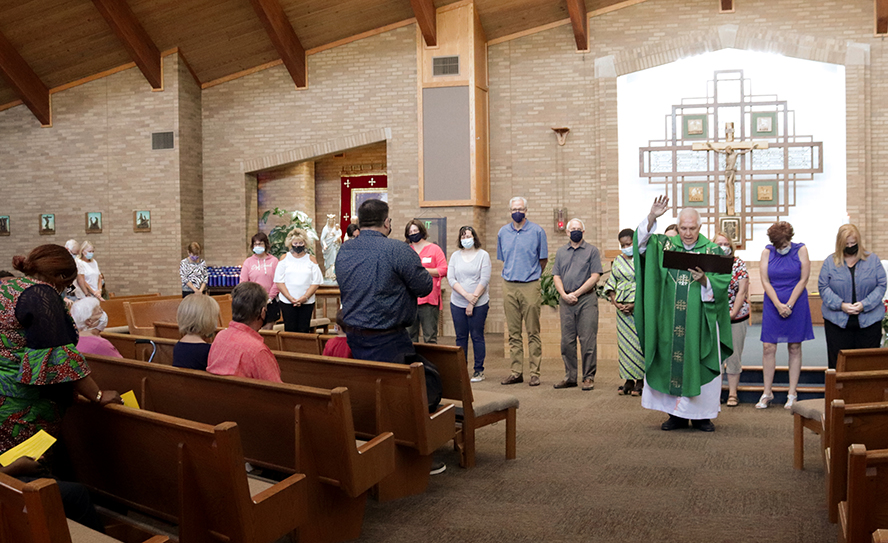 With catechists and members of the RCIA team standing behind him, Father Donald Levitt, pastor at Christ the King Church in Moline, extends his hand in blessing to include parents and grandparents as witnesses to the Catholic faith in their families on Catechetical Sunday, Sept. 19. (The Catholic Post/Jennifer Willems)

COVID-19 made it difficult, but catechists around the Diocese of Peoria found new and creative ways to teach young people about God’s love, the friendship of Jesus, and why it’s important to live their faith all day, every day. Last Sunday they were praised for their ongoing efforts as parishes celebrated Catechetical Sunday.

This year’s theme was “Say the Word and My Soul Shall Be Healed.”

“For me, religious education is super important because there’s nothing else you can learn in life that is more important than that,” said Susan Taylor, sacraments and family life coordinator at St. Matthew Parish in Champaign. “That’s eternal. That’s forever.” 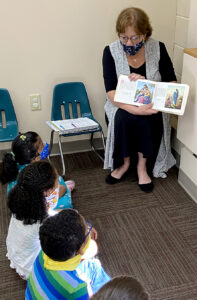 Lucia Bertram shows a page from the Children’s Bible to her kindergarten students at Christ the King Parish in Moline. The religious education program there expanded to include the kindergarten this fall. (The Catholic Post/Jennifer Willems)

She said everyone at the parish shares the same goal, which is to make saints.

“We’re wanting people to attain that heavenly goal and that’s what drives us to do everything that we do, so we can all get there together.”

“The catechetical program isn’t going to run without our volunteers,” Patty Scott, director of religious education at Christ the King Parish in Moline, told The Catholic Post. “It isn’t going to run without the adults coming forward and sharing their knowledge of the faith and sharing their own personal faith journey. It’s something they do out of the goodness of their heart because they love their Catholic faith.”

“We have a really good selection of teachers. They’re all very much dedicated to the kids and to continuing the teaching of the faith,” said Joanne Bibb, who coordinates a co-parish ministry between Holy Family and St. Paul in Danville with Jennifer Martendill. “I feel like we’re really blessed.”

Msgr. Mark Merdian, pastor of St. Pius X Parish in Rock Island, also used the word “dedicated” to describe the lay people involved in the religious education program that includes not only St. Pius X, but St. Mary and Sacred Heart in Rock Island, as well.

“They deserve a lot of honor and credit,” he said, noting their love for the children they teach and their desire to impart “the beautiful gift of faith.”

That included a lot of flexibility as catechists employed a variety of methods to make that possible during the pandemic.

“We were going to make it work — and we did,” Scott said of her discussion with Father Donald Levitt, pastor of Christ the King, before classes started last year. “We made it work, just reassuring the families and the parents that everything was going to be fine and we were going to work through this. Their children were going to be safe.”

Everyone who entered the Believers Together Center or St. Francis Hall for class had to wear a mask that covered their mouth and nose, and hand sanitizer was available outside every classroom. The same protocols continue this year, Scott said.

Classes at Christ the King are not only meeting in person, but the program has expanded to include kindergartners this fall. After every class they take home a handout they can work on with their parents.

In Danville, they were determined to have safe, socially distanced classes in the parish hall at Holy Family rather than do remote learning.

“We felt the students were already doing so much of that as it was that we didn’t want to have one more thing they would do remotely,” Martendill said. “It’s just important to get the kids out and have that sense of community.”

Bibb said they maintained safety by arranging students for in grades one through four and five through eight to meet on alternate weeks. This year everyone is back on Wednesday nights and masks are a must.

Confirmation preparation was rearranged this year, however, so that the seventh and eighth grades are combined until the end of the year. In January, Father Steven Loftus, pastor at Holy Family, will work with the eighth-graders to complete their sacramental formation.

GROWTH AS A FAMILY

In Rock Island, students have traditionally met in classrooms at Jordan Catholic School and Farrell Hall — both on the campus of St. Pius X. Last year’s classes were offered remotely, with teachers either holding online sessions at the usual time on Wednesday afternoons or uploading videos and lessons to Class Dojo and then making themselves available for discussion and questions.

The exception was sacramental preparation for First Communion and confirmation, which was held in person, according to Msgr. Merdian.

“Those are such important contact times when kids can learn about Holy Communion and then eventually the retreat you do for the kids are so important,” he said.

Sessions at St. Matthew were held online through myCatholicFaithDelivered.com last year and that continues this year since COVID-19 is still making its presence known, Taylor told The Post. Students preparing for First Communion and confirmation meet in person to make certain they are getting everything they need.

The new component this year is “Discipleship and Donuts,” which is usually offered the first Sunday of the month. It starts with a Family Mass at 8 a.m. and leads to a presentation for families about a particular topic.

The first one focused on family prayer and provided an opportunity for those who attended to make a plan to grow their faith as a family this year, Taylor explained.

“The whole point is parents are called to be witnesses and not just teachers,” she said. “We’re really just trying to pull everyone together to learn about their faith and live that out at home,” she said.