Gift leads to renovation at St. Francis of Assisi Newman Center at WIU in Macomb 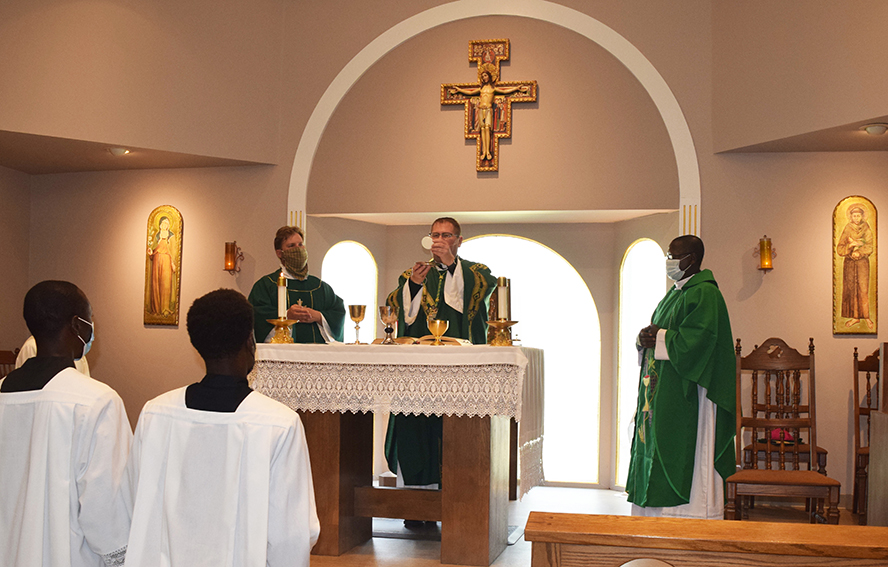 MACOMB — Coadjutor Bishop Louis Tylka expressed the Diocese of Peoria’s gratitude to the family of the late Dr. William “Bill” McCamey on Sunday for a major gift that led to the renovation of the St. Francis of Assisi Catholic Newman Center on the campus of Western Illinois University.

“It is a great gift to the church and we are so blessed because of your family’s generosity,” said Bishop Tylka to Jody McCamey, Bill’s wife seated in the front pew, at the close of a noon Mass on Sept. 19. The Mass in the Newman Center’s chapel celebrated both the renovation and the gift that led to it. 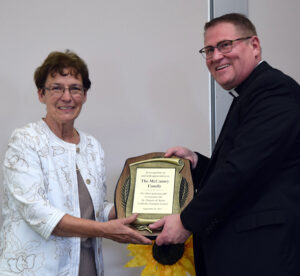 Bishop Tylka presents Jody McCamey with a plaque expressing gratitude for the generosity of the McCamey family. It will hang in the St. Francis of Assisi Newman Center, newly renovated thanks to a gift from the Velma ‘Toby’ McCamey estate in memory of her son and Jody’s late husband, Bill McCamey. (The Catholic Post?Tom Dermody)

Bill McCamey served on the faculty of Western Illinois University’s School of Law Enforcement and Justice Administration for 32 years, teaching courses in criminal justice management, fire administration, and policing. He and Jody were drawn to the Catholic faith while at the university and were active volunteers at the Newman Center.

Bill McCamey died in 2013 at the age of 59. The major gift to the Newman Center was from the estate of Velma “Toby” McCamey, Bill’s mother, in memory of her son following her own death in 2018. In addition to funding the renovation, it will help support future programing.

“His faith, family, the farm, and Western Illinois University were four of the most important things in his life,” said Jody of her late husband. “Bill believed in giving back to the community and was involved in many things. He had the joy of God in his heart for everything that he did and people noticed this when they encountered him.”

The renovation, completed in early 2020, included a new roof, flooring, kitchen appliances, an audio/visual system in the chapel, landscaping, heating and cooling systems, interior painting and the repurposing of several offices.

The Mass was concelebrated by Father Adam Stimpson and Father Joseph Domse, SMA, chaplain and assistant chaplain at the St. Francis of Assisi Newman Center. Father Stimpson also thanked the McCameys for funding what he called a “huge infrastucture renewal.” 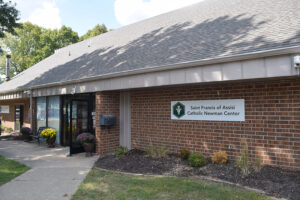 The exterior of the St. Francis of Assisi Catholic Newman Center at Western Illinois University in Macomb. A new roof and improved landscaping were just two aspects of the recent renovation. (The Catholic Post/Tom Dermody)

“It’s beautiful,” said Father Stimpson of the new-look Newman Center. “And it’s also beautiful because it is populated by you,” he said to the students in attendance.

Bishop Tylka said the gift helps the Newman Center continue to “share our message of faith in Jesus with all the students who come through Western Illinois University.”

The celebration continued with a lunch following the Mass, served by the Newman Council students with meat grilled by members of the local Knights of Columbus council.

During the lunch, Bishop Tylka presented Jody McCamey with a commemorative plaque that will hang in the Newman Center acknowledging the generosity of the McCamey family. In introductory remarks, Debbie Benz — diocesan director of development — noted Jody McCamey’s love for her husband and how he “loved his family, his students, and his faith. I can see that faith resonating in you, Jody,” she said.

Among the students attending was Carolina Lopez, a fifth semester graduate student in sociology who serves on the Newman Council. She said the goal of the renovations was not only to beautify and update, but to make students feel welcome and increase involvement. “I hope people see it as an inviting place as much as I’ve seen it,” she told The Catholic Post.

EDITOR’S NOTE: More photos from the Mass and luncheon have been posted to The Catholic Post’s site on Facebook.