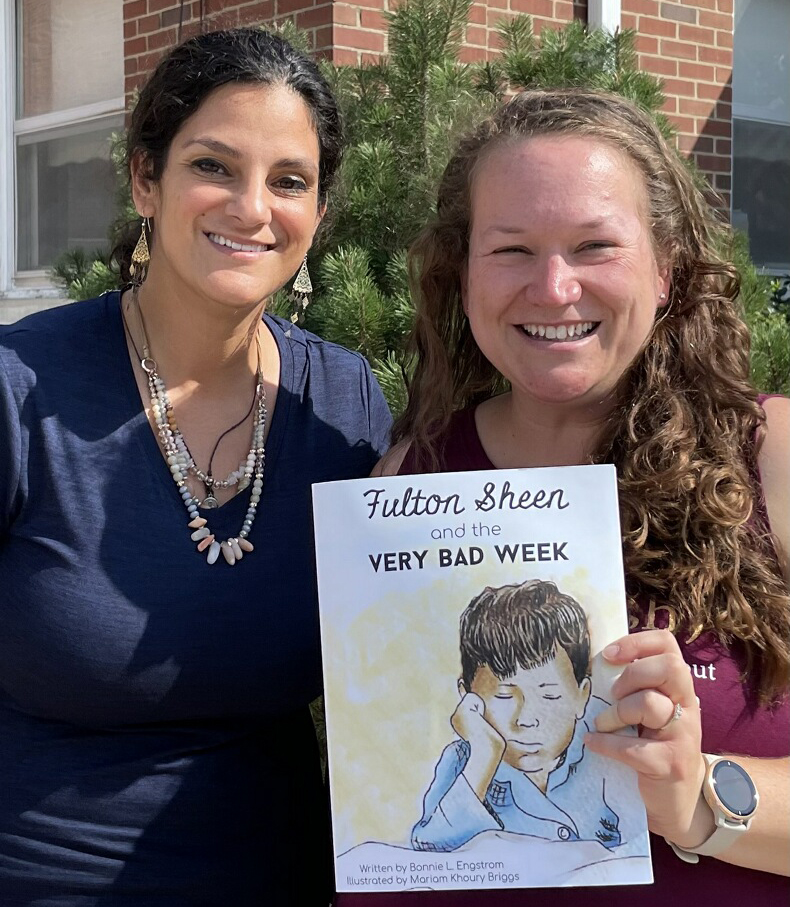 WASHINGTON — Each year as Bonnie and Travis Engstrom celebrate the birthday of their son, James Fulton, on Sept. 16, they also give thanks for the miracle that makes those birthdays possible through the intercession of Venerable Servant of God Archbishop Fulton J. Sheen.

They believe, and the Catholic Church has decreed, that Jesus healed their son, who didn’t take a breath for 61 minutes after his birth, because Archbishop Sheen took their prayers and the prayers of so many others to God.

As they celebrate this year, Bonnie is launching a book to help children everywhere get to know her “dear friend” and ask them to consider what God is calling them to be. Self-published through Amazon, “Fulton Sheen and the Very Bad Week” includes illustrations by Mariam Khoury Briggs. 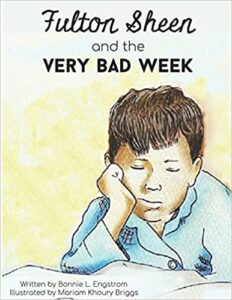 Bonnie Engstrom hopes her book will help children get to know her “dear friend” Archbishop Fulton Sheen and lead them to consider what God is calling them to be.

The book takes incidents from the sainthood candidate’s early life and offers a creative look at how a young Fulton Sheen handled them. While they didn’t all happen in the same week, the stories were adapted from those Engstrom found in his autobiography, “Treasure in Clay.”

Among the stories is how he heard a neighbor’s comment that while he was a good boy, “his nose is always in a book. He’ll never amount to anything,” and how that made him feel. Another tells of how he took some geraniums from a local store to give to his mother, but didn’t pay for them. When Delia Fulton Sheen found out, she made him take money from his own piggybank to make amends.

And no account of Sheen’s life would be complete without the story of how he dropped a cruet filled with wine on the floor of St. Mary’s Cathedral in Peoria while he was an altar server. It was the day Bishop John Lancaster Spalding would tell him that he would go to school in Louvain, Belgium, and “be just as I am.”

“I actually wrote the first draft of this book maybe five years ago because I wanted a way for kids to learn about Fulton Sheen and for them to experience him from a young age,” Engstrom told The Catholic Post. “There’s not really anything out there.”

She took the book to several publishers, but they wanted to wait until after Sheen was beatified to do anything. She decided to persevere because “I just thought families need to know about Fulton Sheen now, not later.”

Engstrom, a writer, speaker and contributor to Blessed Is She, had the manuscript and a personal relationship with Sheen, but she was lacking one thing.

“I can write, but I can’t draw,” she said laughing. “I knew it needed to be a picture book, but I didn’t know who could illustrate it for me.”

That became clear when she saw an illustration of St. Mary’s Cathedral on Instagram that had been drawn by Briggs, a friend from St. Patrick Church and School in Washington who happened to be an artist. One day, when picking up their children from school, Engstrom asked Briggs if she would consider the project.

“A few years ago when Bonnie published her first book, ‘61 Minutes to a Miracle,’ I had a dream that she wrote a children’s book and asked me to illustrate it,” said Briggs, who majored in studio art and communication studies at the University of Iowa. “Unbeknownst to me, she had already written the book. I think the look on my face said it all. . . . It was meant to be.”

“She did such a good job,” Engstrom said of Briggs and her illustrations. “They’re soft but colorful, realistic without being rigid. I think they’re so lovely.”

And they will help children put themselves into the story, according to Engstrom.

“So often we think of saints as people who don’t make mistakes,” she said. “They’re up on this pedestal — they’re not approachable. We don’t really know how to relate to them

“I think it can take a long time — at least it did for me — to figure how to even have a friendship with a saint,” Engstrom added. “So I was hoping kids would read this book and see, ‘That’s the same expression I would have on my face if I dropped the cruet at Mass’ or ‘I play baseball, too’ or ‘I get embarrassed, too.'”

The book takes incidents from the sainthood candidate’s early life and offers a creative look at how a young Fulton Sheen handled them.

A pre-kindergarten teacher’s aide at St. Patrick School who also belongs to St. Sharbel Maronite Church in Peoria, Briggs said working on the book also helped her get to know Fulton Sheen and called that opportunity “a blessing.”

“Under any other circumstance I wouldn’t have taken the time to get to know him,” she said. “I learned he was an extraordinarily ordinary man, but he used his talents to glorify God. What an example he has shown me!”

Through her illustrations, Briggs wanted to convey that while he was human, Sheen achieved greatness through his words, actions and deeds. “We can all strive to be just like him in our daily lives,” she said.

At 49 pages, “Fulton Sheen and the Very Bad Week” may be a bit longer than most children’s books, but Engstrom, a mother of eight, said the balance between pictures and words was vital if children were going to stay interested.

In writing about the book, Bishop Daniel R. Jenky, CSC, said it “brings a wonderful message about the journey of faith specifically for young people. I can enthusiastically recommend this book for parents striving to share their own Christ-centered experience of living and learning.”

OF BIRTHDAYS AND SAINTS

James Fulton Engstrom is 11 years old now and a very active fifth-grader, who was looking forward to bowling with friends and family for his birthday. Bonnie said she was planning to visit Sheen’s Tomb at St. Mary’s Cathedral to make an act of thanksgiving on Sept. 16.

The tribunal to investigate James’ healing was opened on Sept. 7, 2011, nearly a year after his birth. Pope Francis approved the miracle attributed to Sheen on July 5, 2019.

The decree, which was published by the Vatican the following day, moves Archbishop Sheen one step closer to beatification. The date for that celebration, which would be held in Peoria, is pending.