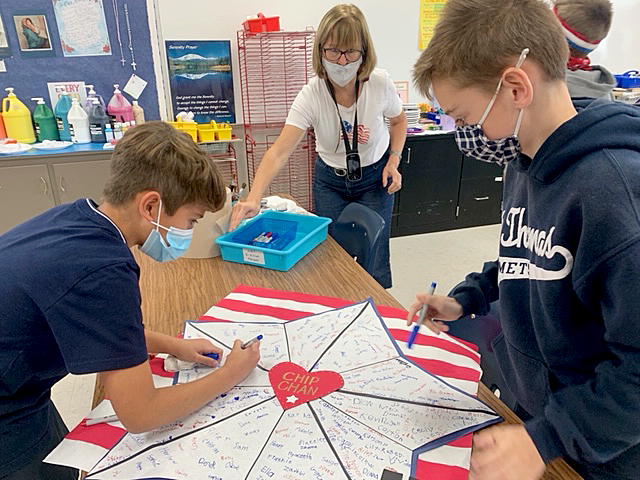 In memory of Charles "Chip" Chan, a graduate of St. Thomas the Apostle School in Peoria Heights who died in the terrorist attacks on the World Trade Center on Sept. 11, 2001, teacher Donna Palkovic designed a spiritual bouquet for the students to sign. Adding their signatures and prayers here are fifth-graders Matthew Teran (left) and Chase Ulrich. (Provided photo)

PEORIA HEIGHTS — Twenty years ago on Sept. 11, John and Julie Chan of Peoria lost their son, Charles “Chip” Lawrence Chan, in the terrorist attacks on the World Trade Center in New York City, and St. Thomas the Apostle Parish and School here lost a brother in faith.

On Sept. 12, he was remembered in prayer at the 9 a.m. Mass, which was enhanced by a spiritual bouquet prepared by art teacher Donna Palkovic and signed by every student in the school. An interdisciplinary unit that involved Jill Ward’s eighth grade literature class and Mary Cushing’s social studies and religion classes also resulted in an exhibit of “blackout poetry” to commemorate the anniversary of 9/11. 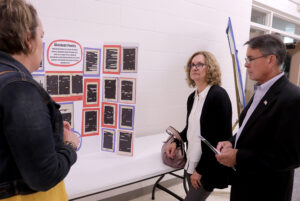 Maureen Bentley, principal of St. Thomas the Apostle School in Peoria Heights, talks with Julie and John Chan about the “blackout poetry” created by the eighth-graders studying about Sept. 11, 2001. The Chans’ son, Charles “Chip” Chan, a graduate of St. Thomas School, died in the North Tower of the World Trade Center that day. (The Catholic Post/Jennifer Willems)

“I feel like it’s our job to carry on his name and to make sure that everybody in this building knows who he was,” said Maureen Bentley, who has been principal of St. Thomas the Apostle School for 17 years. While she never taught Chip Chan, who was working as a currency trader at Cantor Fitzgerald in the North Tower of the World Trade Center on that fateful September morning, Bentley speaks of him as a beloved graduate and his parents as friends with a deep connection to the school.

“It’s tough, obviously, for the family, but at the same time I think it brings them comfort to know that his grade school is still thinking about him and praying for the family,” she said.

One of the ways St. Thomas the Apostle School keeps Chip’s memory alive is by giving the Quiet Leader Award to an eighth-grader, selected by the faculty and staff, in his honor. It is presented each spring by Julie Chan.

“It’s a big award,” Bentley said. “It’s given to someone who shows bravery and is kind and loving, but may be a quiet leader — somebody that’s in the background, but always doing the right things.”

A plaque with Chip Chan’s photo and the names of the recipients hangs in the school library for all to see.

Cushing said she and Ward typically work with the seventh- and eighth-graders on projects focusing on the events of Sept. 11, 2001. With the 20th anniversary approaching, however, they planned some special things over the summer.

“In my teaching career I’ve gone from kids who remember it to kids who weren’t born yet,” Cushing told The Catholic Post. “We wanted them to know as much about it as anybody else.”

She usually starts the conversation in her classes by asking what they already know and then helping them fill in the blanks. “That always brings up lots of questions,” she said.

In her religion classes, they prayed for the 2,977 people who lost their lives, as well as their families.

“That’s the great thing about working in a Catholic school,” Cushing said. “We can integrate all of it.”

While Cushing was working on the historical and spiritual aspects of the event, Ward asked her students to break into small groups and read historical fiction. Then they were encouraged to discuss and reflect on what they had read.

“I already know kids who want to read somebody else’s book,” Ward said. “Getting kids to read is the number one challenge these days. So I’m excited that they seemed to take an interest in another group’s book, because they’re talking about it.”

She also shared where she was on 9/11 and said the parents of many of the students had done the same.

“We talked about patriotism and that we need to take this day and do positive things to remember the tragedy of (9/11) and not necessarily focus on all of the negative of it,” Ward added. 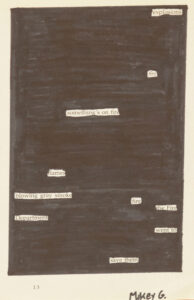 Eighth-grader Michael Guingrich focused on how the first responders raced to save lives on Sept. 11, 2001, in his “blackout poetry” at St. Thomas the Apostle School in Peoria Heights. (The Catholic Post/Jennifer Willems)

To help the students reflect some more, Ward offered them random pages from various books she had collected and asked them to find words that spoke to them and that they could string together referring to 9/11. They used a marker to block out all the other words to create “blackout poetry.”

“It was poignant to see what they wrote. I couldn’t believe some of the stuff they were able to pull from a random page in a book,” Ward said.

Eighth-grader Ella Edwards said it became her favorite type of poetry. Classmate Michael Guingrich said what he wanted to highlight with his poem was how the first responders went to save people in the towers and how “everyone came together to help each other.”

They will continue to learn with a live virtual tour of the 9/11 Museum in New York on Oct. 14. Cushing said a docent will lead the tour via Zoom and take questions submitted by the students.

“Jill and I have both been there on trips to New York. It’s very emotional,” Cushing said, noting that the museum is in the basement of one of the Twin Towers. “Reverence just falls. It’s very quiet. It’s one of the coolest museum experiences I’ve ever had.”

“The farther away it gets, there’s less of an emotional connection. There’s definitely a respect and reverence, though,” she said. “I want them to understand that this happened to real people and not just leave it as something in the past.”