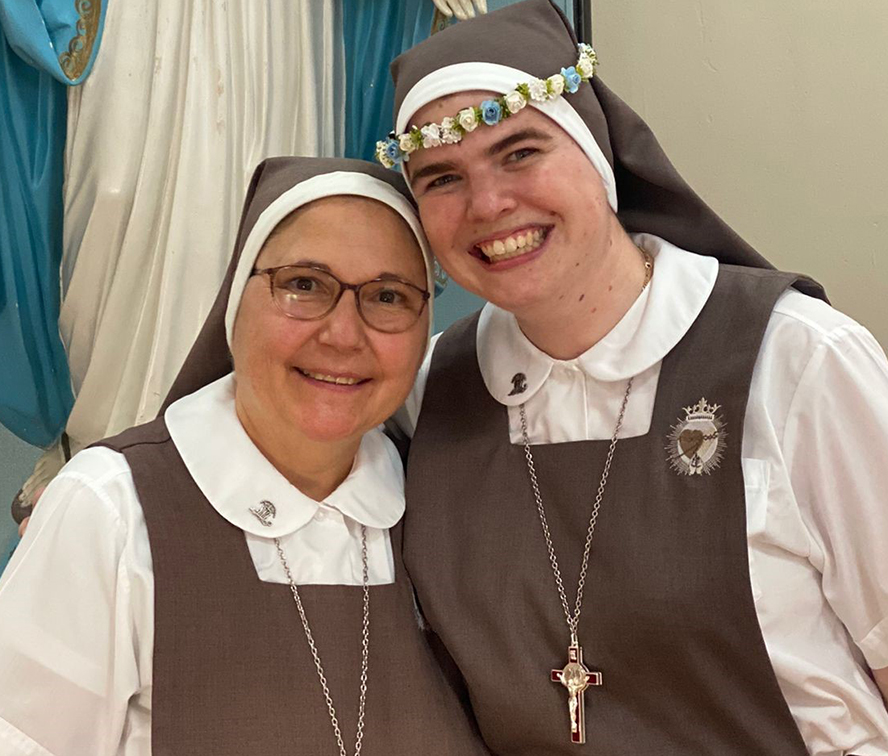 Sister Lucia Maria Sol, SCTJM, embraces her aunt, Sister Ana Margarita Lanzas, the vicar general of the Servants of the Pierced Hearts of Jesus and Mary, after professing her perpetual vows on Aug. 22 in Miami. (Provided photo)

In fact, it’s impossible to walk away from her without wanting to give your life to God as she did when she entered the Servants of the Pierced Hearts of Jesus and Mary in 2010. That joy was compounded when she made her first vows on Dec. 12, 2012.

“I did it forever and ever — an eternal yes to the Lord,” she told The Catholic Post. “There was no going back.”

Last month she made it permanent, professing her perpetual vows at a Mass at St. Mary’s Cathedral in Miami, Florida. Bishop Thomas Wenski was the celebrant and Mother Adela Galindo, foundress of the Servants of the Pierced Hearts, received her vows.

Among the guests was a delegation from Peoria, including Father Corey Krengiel, chaplain at Peoria Notre Dame.

Also professing her perpetual vows was Sister Clara Maria Malay, SCTJM, assistant director of the St. John Paul II Catholic Newman Center at Illinois State University in Normal. She will be featured in a future issue of The Catholic Post.

“Joy” is a word Sister Lucia Maria uses often in talking about her life, her vocation, and her ministry now as a Spanish teacher and campus minister at Peoria Notre Dame. Things might have gone very differently if she had pursued her childhood dream, however.

Born in Miami and baptized Maria Fernanda, Sister Lucia Maria grew up in El Salvador, where her father, Jose Eduardo Sol, was from. Her mother, Giocionda, was from Nicaragua, so raising their four daughters in Central America seemed natural. 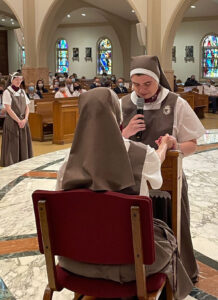 Mother Adela Galindo, foundress of the Servants of the Pierced Hearts of Jesus and Mary, receives the perpetual vows of Sister Lucia Maria Sol, SCTJM, during a Mass at St. Mary’s Cathedral in Miami, Florida. (Provided photo)

Athletic and very competitive, Sister Lucia Maria was comfortable playing all sports but found her real passion on the soccer field. She dreamed of playing professionally and it looked like she was well on her way when another move took the family to Honduras and she became known nationwide for her prowess.

“But in class — I was the clown of the class my whole life. I was the jokester, I was the mischievous one,” she said. “I wasn’t a great student. I had friends who helped me pass.”

When the family moved back to Miami during her sophomore year of high school, soccer helped her adapt to her new surroundings. But she struggled with the social aspect of her life.

“I had friends, but I still wasn’t fulfilled. There was something missing in my life. At that point, I didn’t know what that meant,” she said.

Sister Lucia Maria found what she was looking for at a eucharistic cenacle hosted by the Servants of the Pierced Hearts. Sweaty and disheveled after a soccer game, she accepted the invitation to go so she could see her aunt, Sister Ana Margarita Lanzas, SCTJM, now the vicar general of the religious community.

She had grown up in a Catholic family, but didn’t really have a prayer life. Seeing hundreds of people kneeling as the Lord was exposed in the Blessed Sacrament during the cenacle was eye-opening. She didn’t know what to do.

“So I knelt, I closed my eyes, and for the first time I would say I had prayer come into my soul,” Sister Lucia Maria said. “I felt a rush of fire in my soul that consumed me. It was the love of the Holy Spirit, the love of the Lord in my heart like never before.”

She felt an overwhelming peace and that wasn’t all.

“At that moment, the Lord called me by name and he said, ‘Maria Fernanda, I want something special from you. I want you to be mine.’ Those words were as clear as I am saying them right now,” she told The Post.

She started to cry, but her aunt saw more than tears and assigned one of the Sisters to walk with her niece as a spiritual guide.

“It was my point of coming home to the Lord, my turning point,” Sister Lucia Maria said. “After that experience I came back to school with such a zeal and such a desire to grow in a deeper relationship with God. I started going to daily Mass at school. I started going to regular confession. I just wanted a prayer life and that’s what fulfilled me.”

Religious life was the farthest thing from her mind, but eventually it made perfect sense.

“It has been the most beautiful decision I have ever made in my life. I knew I was leaving behind lots of things. . . . But I knew that what I was gaining was the pearl of great price. What I was gaining was much more than anyone can imagine. It was Our Lord Jesus Christ, who is our all.” — Sister Lucia Maria, SCTJM

“The joy of the religious Sisters, the joy of the Servants of the Pierced Hearts just captured my attention so much that I said out loud, ‘I want that. I want that joy,’” she recalled.

While she could have gone to any school she wanted on a full soccer scholarship, Sister Lucia Maria broke the news to her parents that she wanted to enter the Servants of the Pierced Hearts instead. She was received on May 31, 2010.

“It has been the most beautiful decision I have ever made in my life,” she said. “I knew I was leaving behind lots of things. . . . But I knew that what I was gaining was the pearl of great price. What I was gaining was much more than anyone can imagine. It was Our Lord Jesus Christ, who is our all.”

Sister Lucia Maria continued her education at Holy Apostles College and Seminary in Cromwell, Connecticut, where she earned bachelor’s degrees in philosophy and theology, and master’s degrees in pastoral studies in youth and young adult ministry.

Her assignments have taken her to her community’s house of formation, the Military Ordinariate of Italy in Rome, and campus ministry at the St. John Paul II Catholic Newman Center in Normal and St. John’s Catholic Newman Center at the University of Illinois in Champaign. She has been at Peoria Notre Dame for four years.

“It’s so worth it,” Sister Lucia Maria said. “It’s whatever the Lord wants that will give you authentic joy.”