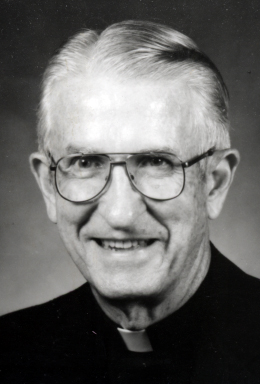 We are not lacking in timely topics that would make worthy editorial fodder for this issue. Reflections on any of the following could fill this space: The end of the war in Afghanistan and the needs of so many refugees . . . ways to help our hurricane-stricken brothers and sisters in Louisiana and the northeast . . . encouragement to support our Catholic neighbors through the Annual Diocesan Appeal . . . the continuing impact of the pandemic on our schools, parishes, hospitals and families . . . the Texas law limiting abortions that is inspiring hope in the pro-life community and turning opponents apoplectic . . . applause for our teachers of the faith on Catechetical Sunday . . . and, of course, the approaching somber 20th anniversary of the 9/11 terrorist attacks.

But in this diocesan newspaper, we ask your understanding as we pause to remember another anniversary. Msgr. Robert G. Peters, who guided The Catholic Post and its predecessor (The Register) for nearly five decades, died 25 years ago on Sept. 7.

Blessed with a brilliant mind, “Father Peters” was a pioneer of new technology in the service of the church, helping to bring not only The Catholic Post but much of Catholic press into the computer age. His service to the diocese included being master of ceremonies for four bishops, and chaplain of the former St. Joseph’s Home in Peoria for 52 years.

So instead of offering our own attempts at direction on a specific topic, we’ll sample the wisdom from a legendary diocesan priest whose work appeared in every edition of this publication for two generations. Within these quotes, taken from his “Ramblin’” column through the years, readers may also discover applications to several of the timely topics listed above.

Rest in peace, Father Peters. And thank you.

ON TRUE HAPPINESS: “I could fill this column with various quotes from Plato to Pope John Paul II, but it all comes down to this: We gain our happiness as we lose ourselves in the service of others.”

ON CONFORMITY: “You cannot live a Christian life by being the same as the rest of the country. The fish cannot exist in the barnyard by eating grain, scraping the dirt, and chasing insects. He’s got to be different or die.”

ON OBEDIENCE: “Almost any parent would far prefer to have a child obey out of love rather than out of fear. Myself, I would like to feel I’m among those who so love the Church they can ordinarily obey simply out of love.”

ON “LEFT” VERSUS “RIGHT”: “I have often defended the right — and even the obligation — of a person to be progressive at one time and conservative at another.”

ON EDITING A CATHOLIC PUBLICATION: “The world and the church of before the Second Vatican Council are as different from today’s world as the days of the apostles. Those were the days when choosing which news to print was a safe and simple manner. And these are the times when a carefully chosen item can make one reader cancel us as too liberal and another cancel us as too conservative.”