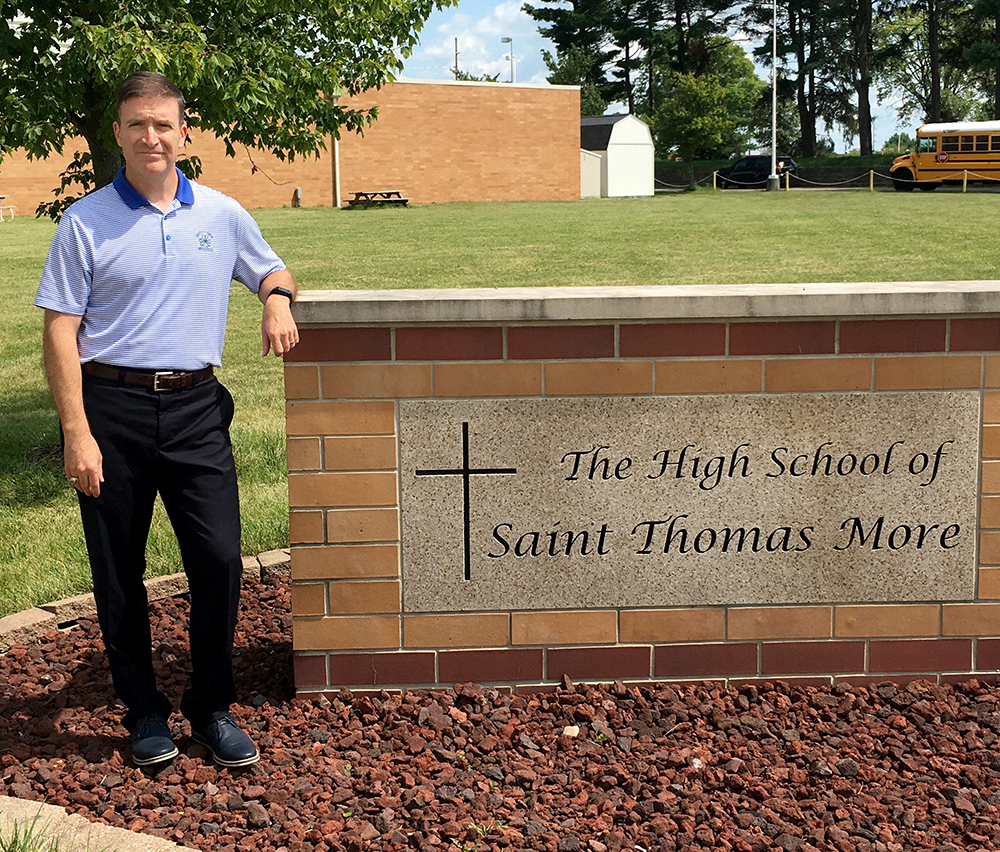 Anthony Corapi is the new chief operating officer at The High School of Saint Thomas More in Champaign.

CHAMPAIGN — During his career as a naval aviator, retired Capt. Anthony Corapi moved throughout the United States 14 times and figures he’s been around the world twice. As exciting as that was, he is looking forward to exploring new vistas as the chief operating officer at The High School of Saint Thomas More.

In the newly created position, he will serve alongside Sister M. Bridget Martin, FSGM, principal, and Father Andru O’Brien, chaplain, to form a leadership team that will allow each of them to excel at what they do best.

“The main part of her portfolio is our primary mission, which is the education of our kids,” Corapi said of Sister M. Bridget, whom he admires greatly. “Curriculum, faculty, the students — that’s our main purpose and that’s what she is bringing to the table and really focusing her energy toward.”

He explained that his role is to handle the other “burdens” that come with running a school, such as the budget, finance, enrollment, development, advancement, athletics, and the security of the school itself. He will also serve as dean of students.

“They did want me to do the discipline side and that’s fine. I’m happy to do it,” Corapi said. “But I say we’re all in charge of discipline because we all love these kids. . . . We’re going to put our arms around them and say, ‘Let’s go figure this out.’”

“INTERACT WITH THE KIDS”

Corapi has been able to observe Sister M. Bridget’s leadership style as the parent of two students at Saint Thomas More.

Daughter Anna graduated last spring. During her years at the Champaign high school she ran cross country, played soccer and tennis, and brought Sammy the Saber, the STM mascot, to life.

“Sammy lived in our laundry room closet for a few years. Sometimes it was a little terrifying — you’d forget it was in there and there’s this huge Saber head on the shelf,” Corapi said with a laugh.

Son Thomas just started his sophomore year, and plays football, basketball and tennis. He also gave his father some advice for how to handle his new job.

“Just interact with the kids. Not too much! Don’t be weird about it, but just talk to us,” Thomas told him.

“And he’s right, I will interact with them and be with them,” Corapi said. “The most important part of the job is to be with those kids.”

A MODEL TO WATCH

Corapi is the first to admit that he doesn’t have any formal training in education.

He attended The Citadel in Charleston, South Carolina, and holds a bachelor’s degree in civil engineering. He would earn a master’s degree in operations management from the University of Arkansas in 2012.

Even as a kid, naval aviation fascinated him and he got his wish, flying a P-3C Orion, a submarine hunter. When that was being phased out, he flew the P-8A Poseidon, which had the same mission.

“In the Navy, much of what we do when we’re not actually doing our missions is training and educating for the mission. So you are teaching, you’re just teaching in a different way.” Anthony Corapi

His 14 moves took him to Jacksonville, Florida, more than once, since that is where one of the main bases for the aircraft is located. The other is Whidbey Island, Washington, where he also served.

Corapi was also military assistant to the executive secretary of defense in Arlington, Virginia, for two years.

“But in the Navy, much of what we do when we’re not actually doing our missions is training and educating for the mission. So you are teaching, you’re just teaching in a different way,” Corapi said, noting that he does know what it’s like to stand in front of a classroom.

Dr. Sharon Weiss, superintendent of Catholic schools for the Diocese of Peoria, said that and his experience with leadership, conflict management, decision making, and evaluation of staff throughout his military career makes him more than qualified to serve at Saint Thomas More.

“This collaborative leadership approach and shared leadership is fascinating to me,” she said. “Anyone who has been in a leadership position can see just how encompassing and overwhelming it can be, especially with a school because there are so many different facets to it.”

Weiss said she would be watching to see how this new model of leadership works and if it could and should be adapted for other schools.

The Corapi family moved to Champaign in 2017, determined to put down roots. Thomas was in the sixth grade at that time and Anthony and wife Jill did not want to move him again.

Knowing he would be retiring from the Navy in 2021, Anthony set it up so his last active duty job was with the Navy ROTC detachment at the University of Illinois. He started volunteering and joined the Champaign Rotary Club as a way of networking and meeting people.

They joined St. Matthew Parish, where he serves as a lector, Jill is an extraordinary minister of Holy Communion, and Thomas is an altar server. Jill also works as the school nurse at St. Matthew School.

“Now that I’ve come to know the area better, I look at the options and the public schools are good,” Anthony said. “But we do something better. I look at the faith formation and the moral and ethical foundation that we’re building in these kids because it’s not just the academics, right?

“I want them to grow up to be good people. Yes, I want them to be successful in whatever they do,” he said. “But I know they’re going to be good kids. . . . And it’s because of the things they’ve been taught throughout their years in Catholic education.”