Tim Smith is welcomed as principal into ‘family’ at St. Malachy School, Geneseo 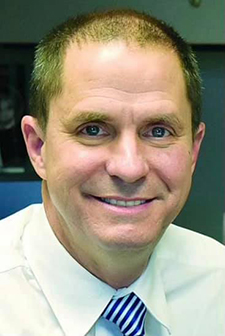 GENESEO — As an educator and administrator with more than 30 years of experience, Tim Smith has seen many first days of school. What made Aug. 23 so special for him, however, was welcoming and being welcomed by his new “family” at St. Malachy School.

Smith was named to succeed Heather Francque as principal of the Geneseo school on Aug. 17. He said he knew it was meant to be when a search committee member said, “We’re a family,” during the interview.

“My energy level just kept getting higher and higher,” Smith told The Catholic Post. “I just felt like the Holy Spirit was bringing us all together and I think it’s going to be a really good opportunity.”

“I just felt like the Holy Spirit was bringing us all together and I think it’s going to be a really good opportunity.” — Tim Smith

He said his wife, Aggie, a retired speech therapist, and daughter, Emily, 18, and son, Luke, 14, feel the same way.

“We’ve all talked about this and we’re all excited,” Smith said during a telephone interview on Aug. 20. “I can’t wait for Monday to get here.”

The Smiths are active members of St. Louis Parish in Princeton, where Tim serves as a sacristan and extraordinary minister of Holy Communion, and helps with the youth group. He is a member of the Knights of Columbus, Father Edward Farrell Council No. 5591.

In addition, it brings Smith back to Catholic education, something he has wanted for a long times.

Raised in the Bureau County community of Ohio, Smith was a member of Immaculate Conception Church. He attended religious formation classes on Wednesday nights and was an altar server.

“I had teachers in that small community that were incredibly caring and passionate, and I wanted to be like them,” he said, adding that his parents valued education and respected the profession.

Smith received a bachelor’s degree in history and business, as well as his teacher certification from Eureka College, and a master’s degree in educational administration from Illinois State University. A certificate of advanced study from Lewis University provided the license he needed to serve as a superintendent in public schools.

His first jobs were at St. Anne School in Dixon, where he was a junior high teacher, and Newman Central Catholic High School in Sterling. He would go on to work at Lamoille Public Schools for six years.

Smith served at Princeton Elementary School for 25 years, with nine as principal and 16 as district superintendent.

He compared school administration to coaching, which he started doing from the day he went to St. Anne in Dixon.

“As a coach you are equipping your team to be the best they can be,” Smith explained. “So that’s what really drew me to be a principal and superintendent, because I wanted to help equip my teachers with whatever they needed to be successful with students.”

While he retired on June 30, his dream of getting back into Catholic schools didn’t. A text message from a friend about the opening at St. Malachy — and prayer and discernment with his wife — was all he needed.

“That’s what makes it so exciting that this opportunity came up when it did,” Smith told The Post. “It just feels like an incredibly good fit.”