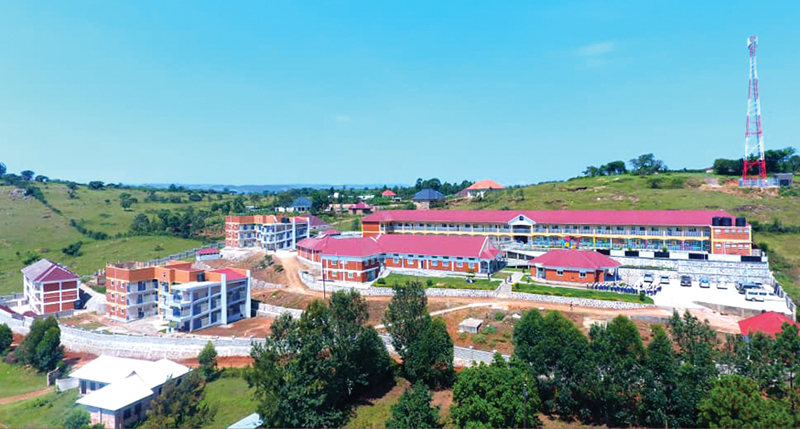 WASHINGTON — Like everywhere else, COVID-19 has affected the people of Uganda, making it difficult to travel and hold school. Father Julius Turyatoranwa didn’t let it stop him from making his way back to central Illinois, however, and bringing good news about St. Patrick Nursery and Primary Day and Boarding School. 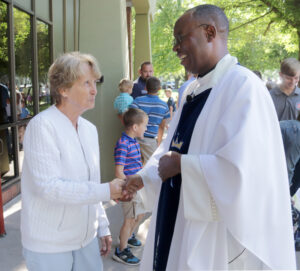 Marla Jarboe greets Father Julius Turyatoranwa after Mass at St. Patrick Church in Washington Aug. 15. He had served as parochial vicar at the parish while studying for his doctorate at Illinois State University and he named the school he founded in Uganda after St. Patrick. (The Catholic Post/Jennifer Willems)

He arrived on Aug. 6 and hit the ground running, spending much of this month attending fundraisers, celebrating Mass, and sharing that good news with friends and former parishioners in East Peoria, Washington, Bloomington, Normal, Morton and Peoria.

Coordinating his visit has been Building Hope in Kids – Uganda, the charitable foundation established to help him build the school that aims to break the cycle of generational poverty by providing “a superb education to children.” His host has been John Grillot, president of the BHIKU board.

“Really our expectations — we have exceeded them already,” Father Julius said during an interview at Grillot’s Washington home. “When we started we thought we would keep building slowly, slowly, slowly.”

It has been anything but slow, however.

Father Julius served as parochial vicar at parishes of the Diocese of Peoria from 2007 to 2017 while he studied for a master’s degree and doctorate in educational administration at Illinois State University. He named the school in Uganda after St. Patrick Parish and School in Washington, where he was from 2014 to 2017. 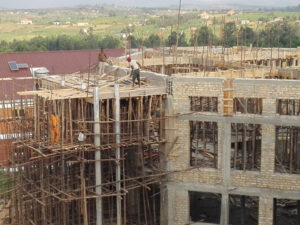 Construction of an auditorium to be named for St. Francis of Assisi is being constructed now on the campus of St. Patrick Nursery and Primary School in Uganda. The multipurpose space will have seating for 1,000 and be used for Mass and large school functions. (Provided photo)

He returned home on Dec. 29, 2017, and construction began in 2018. Phase 1 included a classroom block, administration building, dining and multipurpose hall, and kitchen, with an estimated cost of $640,000. It was completed in April 2019.

The large classroom block was named for St. Monica Parish in East Peoria, which also benefited from Father Julius’ ministry while he was in Washington. Most of the other buildings bear the names of major donors.

Phase 3 included living quarters for the teachers, a third level for both dormitories, and a security wall around the campus. The cost of these projects was $440,000 and they were completed by February of this year.

“Teachers do not have cars like they do here. If you want good teachers you recruit them from far away,” Father Julius said. “So they need accommodations to stay at the school.”

That also allows them to help with the boarding students, he said.

Father Julius said they are in Phase 4 now, which includes construction of an auditorium to be named for St. Francis of Assisi. It will be used for graduation and other school functions and have seating for 1,000 people on two levels. Staff housing is also part of this phase, which he hopes will be completed by this December.

“When we have Masses, we can use the auditorium,” he added. “Right now we are using the dining hall, but it is small. We are just 500 now, but it is filled to capacity.”

“When people pass by they say, ‘Which university is that?’ because it doesn’t look like a primary school.” — Father Julius Turyatoranwa

Masses are celebrated on Thursdays for the entire student body and on Sunday for the boarding students.

Phase 5 would allow them to add an independent nursery school, which has not been designed yet. Father Julius said this is required by the government. Right now the nursery school shares space in the main classroom block with the primary school students.

“When people pass by they say, ‘Which university is that?’ because it doesn’t look like a primary school,” Father Julius said.

“The whole facility so far has been built for under $2 million on capital and it would have cost $20 million or $30 million here,” said Grillot. “It was done in under three years from dirt, with people making individual blocks right on-site.”

“The whole facility so far has been built for under $2 million on capital and it would have cost $20 million or $30 million here. . . . We have so many committed people.” — John Grillot

“It’s happening,” Grillot said. “We have so many committed people.”

He added that the board has made a commitment to themselves that there will be no mortgage or loans. Everything must be paid for as it is done.

The work continues, even during the pandemic. Classes were halted in March 2020, however, just a month after the second academic year began.

Father Julius said students were allowed to return on a staggered basis last October, with the seventh grade coming back first, and then sixth grade, fifth grade and fourth grade. Classes for the youngest students were canceled.

If the COVID positivity rates continue to fall in Uganda, he hopes to reopen the school in mid-September.

Despite having had only one full year of classes, St. Patrick has seen great success. Father Julius said the seventh-graders — “our pioneers” — scored in the top 10 percent in nationwide testing. On the district level, St. Patrick came in second among 100 schools.

Enrollment continues to surprise him. There were 302 students when the first academic year began on Feb. 4, 2019, and 356 by the end of the inaugural year. At the beginning of the second academic year, there were 528 students.

While Father Julius is the founder of St. Patrick Nursery and Primary School and oversees what happens there, he depends on an administrative team for the day-to-day operations. The team includes a headmaster or principal; a school bursar, who is in charge of finances; a school nurse to monitor hygiene and manage the matrons who work with the boarding students; and a facilities manager.

“The results you see are outstanding — the buildings, the children, the success of our pioneers, and we have zero debt. That is something to celebrate.” — Father Julius Turyatoranwa

“The team meets every week and they give me a report by phone,” he said. “I go to the school a minimum of two times a month — every fortnight — and find out what has been going on in those two weeks.”

The “power of delegation” comes in handy since Father Julius is also the pastor of a large parish, Christ the King in Rukungiri, with 22 mission churches. Helping him to care for the 8,000 parishioners are two assistant priests.

“Not only do I do that, but I am on many diocesan committees. I am on the boards of secondary schools, seminary high schools,” he told The Catholic Post. “But when you have a timetable it is doable.”

No matter where he was or where he visited in central Illinois during his visit, Father Julius repeatedly thanked people for their generosity.

“The results you see are outstanding — the buildings, the children, the success of our pioneers, and we have zero debt. That is something to celebrate,” he said.

One thing on his wish list, however, is more sponsors for the students who cannot afford the tuition. Sponsors pay $50 a month or $600 per year, which covers room and board in addition to tuition.

To support the school, send checks made payable to Building Hope in Kids – Uganda (or BHIKU) to: BHIKU, P.O. Box 612, Washington, IL 61571 or donate online at buildinghopeinkids.org.

The cost is $90 per person, which includes greens fee, cart and Avanti’s dinner afterward at Quail Meadows.

Checks made payable to Adolph Arnold may be sent to him at 111 Regent Court, East Peoria, IL 61611. Donations are welcome and may also be sent to Arnold.

The deadline to register is Sept. 4.