Paul Moore: ‘Set it and forget it’ is not a good idea for faith between sacraments 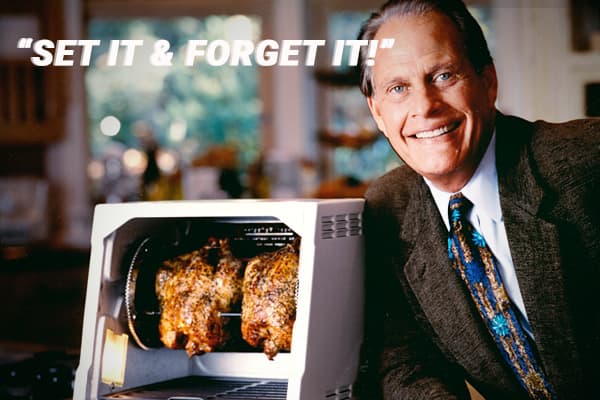 Gadget inventor and pitchman extraordinaire Ron Popeil passed away on July 28. He was 86.

Not to make light of any soul’s passing, but many of Mr. Popeil’s creations have already been laid to rest in attics and yard sales from here to kingdom come.

The Inside the Eggshell Egg Scrambler, for instance, did what you’ve always wanted to do — scramble an egg while it’s still inside the shell. Of his Six Star Plus Knife, demonstrated on late-night TV by cutting through shoe leather and pieces of wood, Popeil would promise, “Slice a tomato so thin it only has one side.”

“But wait, there’s more!,” as he would always add. His biggest moneymaker was the Showtime Rotisserie and BBQ, which inspired the immortal tag line: “Set it, and forget it.”

This phrase caught the ear of our priest, Father Greg Jozefiak (who apparently was also caught by a pitch for Popeil’s Pocket Fisherman earlier in life). In a homily after the master marketer’s death, Father Greg noted that unfortunately, “set it and forget it” is often what he and other priests see — or more accurately, don’t see — after families have checked the sacramental boxes.

I don’t think it would have gone over too well if, after the wedding ceremony, I had said to my new bride, “Thanks, see you next year for our first anniversary.”

Setting aside the sacramental aspect, Father Jozefiak asked married couples in attendance to reflect on how the “set it and forget it” mindset (or “one and done” as the currently popular phrase goes) would work in a real-life marriage context. Speaking for myself, I don’t think it would have gone over too well if, after the wedding ceremony, I had said to my new bride, “Thanks, see you next year for our first anniversary.”

It’s been said that the most important thing in life is showing up. The path from baptism to first Communion, to confirmation, to holy matrimony/religious/single life involves a series of ascending commitments to Christ. These sacramental steps are obviously fundamentally necessary, but it’s like they say with a golf swing — the real proof is in the follow through.

Otherwise, it’s like calling a parent only on Mother’s Day or Father’s Day. Same thing with Christ. If we don’t check in between special occasions, it’s not much of a relationship. A daily morning or nightly hello, a weekly Mass, a yearly confession (more often if needed), a weekday visit to an Adoration Chapel “just because,” an individual or group retreat to spend an extended time with Him (for instance at the Diocese of Peoria’s new Sacré-Coeur Retreat Center in Putnam County): these are the touchstones of a deepening relationship.

As Katie Faley noted in her column in the Aug. 11 issue of The Catholic Post, “we are in the thick of Ordinary Time.” We’re still there, in the Church’s longest season between the anchor feasts of Christmas and Easter.

During this time, we have reason to celebrate the very common miracle of every single day of our existence upon this earth, as anyone knows who has ever hummed along with the Sarah McLachlan song “Ordinary Miracle” as they strolled along a sunlit morning path or gazed upon a harvest moon.

It would be a shame to “set it and forget it” and miss the marvelous opportunities God makes available to us each dawn.

In all due respect to Ron Popeil and his promise of culinary delights — if only one purchased his slicing, dicing Veg-O-Matic — the Lord has already promised, “But wait, there’s more!”

Why spend your money for what is not bread;

your wages for what does not satisfy?

Only listen to me, and you shall eat well,

Paul Thomas Moore is a Catholic commentator and singer-songwriter. He and wife Mary Louise attend St. Mary of Lourdes in Germantown Hills. He can be reached at paulthomasmoore@hotmail.com.