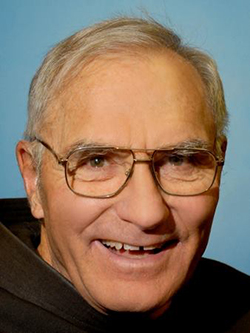 OLDENBURG, Indiana — A Mass of Christian Burial was celebrated on Wednesday, Aug. 18, at Holy Family Church here for Father Neri Greskoviak, OFM, who served as pastor of five parishes in the Diocese of Peoria, including from 2001 to 2014 at St. Mary of Lourdes Parish in Germantown Hills.

Father Neri’s body was received at Holy Family Church in Oldenburg an hour prior to the funeral Mass, which was celebrated by Father Mark Soehner, OFM, provincial minister of the Franciscan Friars of St. John the Baptist Province. The homilist was Father Bruce Hausfeld, OFM, who called Father Neri “a faithful friar and a faithful person who loved all the people he ever ministered to.”

Interment followed the Mass in the friars’ plot at Holy Family Cemetery.

Born on March 23, 1936, in Minonk, Richard Greskoviak was one of four children of Joseph and Proxida (Smolinski) Greskoviak. He attended St. Patrick Elementary School and then graduated from St. Francis Seminary in Cincinnati before entering the Franciscan novitiate on Aug. 15, 1954, and receiving the religious name “Neri.”

Professing his first vows in 1955, he entered Duns Scotus College in Southfield, Michigan, where he made his solemn vows in 1958. He was ordained to the priesthood on June 13, 1963, at St. Leonard College in Centerville, Ohio.

Father Neri spent nearly his entire priestly life in parish ministry. His first assignment was as associate pastor of St. Mary Parish in Farmington, New Mexico. He then served at St. Peter Parish in Roswell, where he was named pastor in 1974. After a year at St. Stephen Parish in Hamilton, Ohio, Father Neri returned to New Mexico as associate pastor at St. Francis Cathedral in Santa Fe.

His service in the Diocese of Peoria began in 1977 when he was named parochial vicar of St. Mary Parish in Bloomington. After three years there, he spent one year in Oldenburg as chaplain to the Franciscan Sisters. He returned to Illinois in 1981, remaining here for the rest of his active ministry.

Father Neri was parochial vicar of and then pastor at St. Mary Parish in Metamora and St. Elizabeth Parish in Washburn for 18 years before moving to Roanoke as pastor at St. Joseph and St. John in Benson.  In 2001, he was named pastor of St. Mary of Lourdes Parish in Germantown Hills. He served there until he retired from full-time ministry in 2014, and spent the next two years at St. Mary Friary in Bloomington, serving as parochial vicar while semi-retired.

In 2016, he fully retired to Holy Family in Oldenburg, still offering assistance in the parish and surrounding area as needed.

Father Neri was preceded in death by his parents; his brothers, Jerome and Arthur; and his sister, Roselyn Renner.

He is survived by his sisters-in-law; a friar classmate, Dennet Jung; and a close friend, Sister Mary Ellen Gillman, OSF.