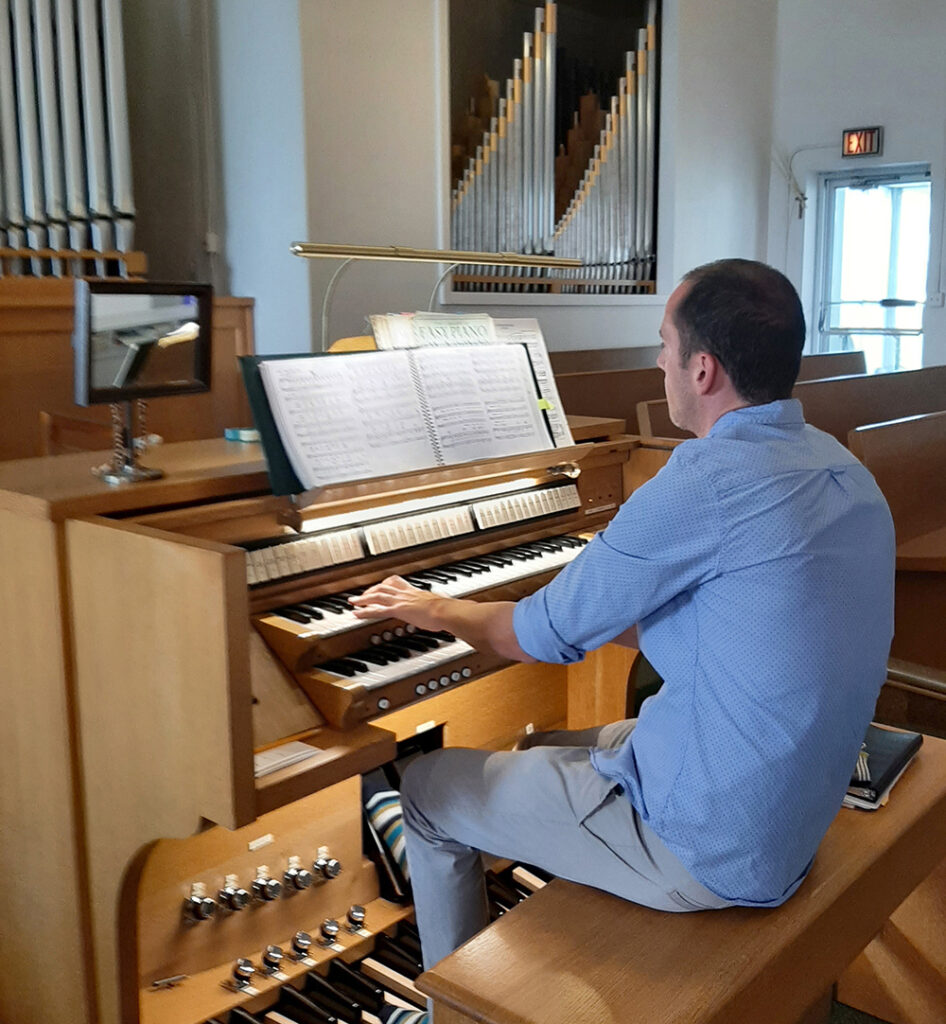 Chris Versluis, who has been playing the organ at St. Mary Church in Rock Island for 22 years, sits at the new console of the refurbished instrument on a recent Saturday afternoon. "The keyboard is still the same, so it still feels like home," he said. (Provided photo)

ROCK ISLAND — On any Saturday afternoon or Sunday morning a clear, powerful, vigorous voice proclaiming the glory of God can be heard coming from St. Mary Church here — and bringing parishioners right along with it. That voice belongs to the newly refurbished Wicks pipe organ that will be blessed on Sunday, Aug. 29.

Father Luke Spannagel, pastor, will offer the blessing at the 10:30 a.m. Mass. An open house and recital by parish organist Chris Versluis will follow.

The festivities mark the 170th anniversary of the laying of the cornerstone by Father John A. Pelanouges, pastor of St. Anthony Church in Davenport, Iowa, on Aug. 31, 1851. The modest celebration also serves as a kickoff for preparations for the parish’s 175th anniversary. 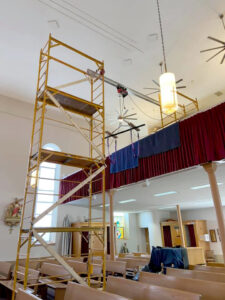 The new console for the refurbished Wicks pipe organ at St. Mary Church in Rock Island prepares to return to the organ loft the same way it came down — hoisted by Berghaus Pipe Organ Builders of Bellwood. (Provided photo)

“To focus on the Mass and enhance the Mass, especially through our music — to everyone it seemed like the fitting place to start this work for the 175th anniversary,” Father Spannagel told The Catholic Post. “We want our Mass to continue to be really strong and this was a great opportunity to not only praise God together, but to be able to grow together as a parish.”

In recent years, parishioners have also worked to restore the stained glass windows, starting with those that were most vulnerable. That way, all aspects of the church will be “buttoned up and secure” and can be enjoyed as important milestones approach over the next 25 years, he explained.

“We want to not only honor our predecessors here at the parish, but in a similar way we want to be generous in providing for the future, as well,” Father Spannagel said. “When we gather on Sunday, we know the joy of being able to be there together because of the people that went before. We give that same gift to the future parishioners at St. Mary’s.”

Considered the cradle of Catholicism in Rock Island County, St. Mary Church has a reputation for making the faith known that dates back to Father John George Alleman, the pioneering priest who traveled up and down the Mississippi River tending to souls.

Those that followed him made improvements to the church, which included installing a pipe organ in the 1890s. They added to it as money became available, with the last major renovation coming in 1977, said Versluis.

The current organ has 17 ranks of pipes and was starting to have issues as an outdated electrical system caused the instrument to have ciphers — notes that play by themselves without being touched.

“So when you turned the organ on it would immediately start making noise,” Versluis said. “It’s like a leak. Then you have to block the ciphers, which means that pipe or that note can no longer be played.” 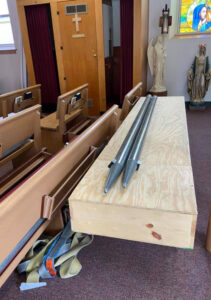 Some of the newly cleaned pipes from the Wicks organ’s 17 ranks are ready to return to their place in the organ loft at St. Mary Church in Rock Island. (Provided photo)

Patching it was not a good option, so the parish opted for a full restoration. The work was done for $123,000 by Berghaus Pipe Organ Builders in Bellwood.

Dismantled in June and taken to the Berghaus workshop, the organ was back and ready to grace liturgies by the middle of July, almost a month ahead of schedule. In addition to cleaning the pipes and releathering some of the components of the organ, the craftsman changed the console to one that is mechanized so jump drives can be used, but is also manual.

Versluis said that while the organ was away, parishioners made the necessary preparations for its return. He cited Fred Attwood, who did some much needed maintenance on the organ chambers, and Chris Dasso and his father Pete Dasso, who did the electrical upgrades.

“It is amazing because it looks fantastic and it sounds even better,” said Versluis, a lifelong parishioner of St. Mary who has been playing the organ since he was 17.

While he does not claim to be a trained musician, Father Spannagel noted that the organ sounds very clear and powerful now.

“I would say that is has a vigor that to me matches the kind of praise that we want to offer to God at Mass,” he said.