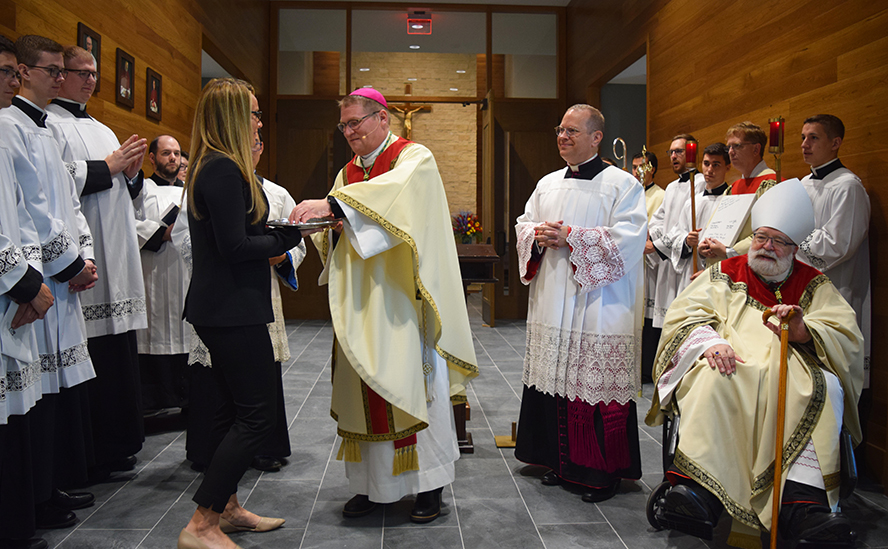 "It is our absolute honor to present to you the keys to the Chapel of the Sacred Heart," said Leanne Skuse, president of River City Construction in East Peoria, builders of the Sacré-Coeur Retreat Center, as she gave the keys to Coadjutor Bishop Louis Tylka in a ritual "handing over of the building" prior to the procession into the chapel for the Mass of Dedication on Aug. 2. Among those looking on are Msgr. Stanley Deptula and Bishop Daniel R. Jenky, CSC. (The Catholic Post/Tom Dermody)

MAGNOLIA – The cornerstone of the Diocese of Peoria’s new Sacré-Coeur Retreat Center bears the names of both Bishop Daniel R. Jenky, CSC, and Coadjutor Bishop Louis Tylka, so it was fitting they shared roles as its Chapel of the Sacred Heart was dedicated on Monday, Aug. 2.

Bishop Tylka was principal celebrant and presided at most of the ancient rituals during the Solemn Mass for the Dedication of a Church and Altar.

Bishop Jenky was homilist, and thanked all who had a role in making the new retreat center a reality. 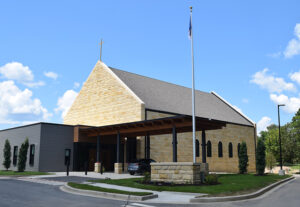 The exterior of the Chapel of the Sacred Heart at the Diocese of Peoria’s new Sacré-Coeur Retreat Center in Magnolia. (The Catholic Post/Tom Dermody)

“My hope is this magnificent building — better than I ever expected, more than I ever dreamed of — will be an inspiration for us,” said Bishop Jenky.

Noting that Jesus and his disciples frequently took time away to rest in private, Bishop Jenky encouraged all — “our schools, our organizations, our teachers, our priests, our religious” — to come to “this sacred place” to “rest in the Lord and discover in Him who they are.”

Bishop Jenky especially thanked Bishop Tylka for his contributions in overseeing “endless” details of the retreat center’s construction and design during the past year, drawing laughter by adding “we got a coadjutor bishop just in time.”

“ENTER THE GATES WITH THANKSGIVING”

The ritual-rich liturgy began with a gathering outside the entrance to the Chapel of the Sacred Heart, the larger of two chapels at the retreat center. The more intimate Chapel of the Holy Cross will be dedicated at a later date.

As part of the opening rite, Bishop Tylka received the keys to the chapel from Leanne Skuse, president of River City Construction, principal builders of the retreat center.

“Thank you for all the work you have done to bring us to this day,” Bishop Tylka told Skuse. “God bless.” 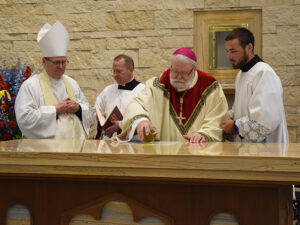 Bishop Daniel R. Jenky, CSC, pours Chrism on the altar of the Chapel of the Sacred Heart during an anointing ritual in the Rite of Dedication on Aug. 2. Coadjutor Bishop Louis Tylka, left, then spread the Chrism throughout the surface of the altar. (The Catholic Post/Tom Dermody)

He then invited the dozen concelebrating priests, seminarians, and nearly 100 guests to “enter the gates of the Lord with thanksgiving, his courts with psalms of praise” as an antiphon was chanted. Once all were assembled in the chapel, a choir directed by Jon Kroepel, diocesan director of sacred music, led a robust singing of “Praise to the Lord.”

In his homily, Bishop Jenky noted that the retreat center and chapel are named for the Sacred Heart of Jesus, which is traditionally depicted aflame. He called on Catholics of the diocese to also have their hearts set on fire, “united to a Lord who is love.”

“That is the reason, that’s the energy for everything we do,” said Bishop Jenky. Recalling the importance of the family dinner table of his youth, he said the altar about to be consecrated should be “a reality around which we live.”

The Rite of Dedication followed, with the assembly kneeling as the Litany of the Saints was chanted. Bishop Tylka knelt at the altar. He then inserted an altar stone containing a relic of St. Margaret Mary Alacoque, a French Roman Catholic Visitation nun and mystic who promoted devotion to the Sacred Heart of Jesus.

Bishop Jenky then poured Chrism on the altar, and Bishop Tylka did as well, spreading the mixture of oil and balsam to all parts of the altar’s surface with his hands. Bishop Tylka then went to four beams of the church walls, also anointing them with the Chrism, signifying the chapel is given over entirely and perpetually to Christian worship.

Other aspects of the Rite of Dedication included: 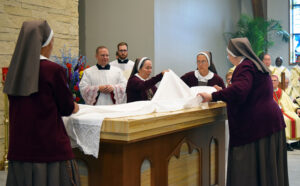 Members of the Servants of the Pierced Hearts of Jesus and Mary cover the altar at the Chapel of the Sacred Heart after its anointing. They include, clockwise from left, Sister Catherine Grace, Sister Laura Garcia, foundress Mother Adela Galindo, and Sister Ana Pia Cordua. Sister Catherine Grace, Sister Laura, and Sister Ana Pia are on staff at the new Sacré-Coeur Retreat Center in Magnolia. (The Catholic Post/Tom Dermody)

The Chrism was then wiped from the altar by four members of the Servants of the Pierced Hearts of Jesus and Mary, including three who will staff the retreat center as well as Mother Adela Galindo, the community’s foundress. The four later covered the altar with the linen cloth.

The gifts were carried forward by two leaders of The Sisters of the Third Order of St. Francis — Sister Judith Ann Duvall, major superior, and Sister Diane Marie McGrew, president of OSF HealthCare, which plans to utilize the retreat center extensively.

The chapel includes a blend of both new and historic art and furnishings. In wall niches at the entrance are sculptures of St. Therese of Lisieux and Jesus the Divine Mercy, newly crafted by Suzanne Young of Michigan. The crucifix hanging high above the altar is from the chapel of Nazareth House/King’s House, the former retreat center that was razed to make room for the new facility. On either side of the crucifix will hang images of Our Lady of Guadalupe and St. Joseph the Worker, yet to arrive. 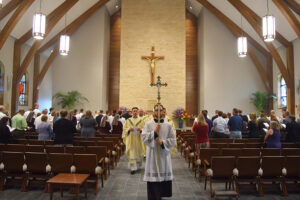 Seminarian Blake Miller leads the procession at the close of the Mass for the Dedication of a Church and Altar at the Chapel of the Sacred Heart at the Diocese of Peoria’s new Sacré-Coeur Retreat Center in Magnolia. (The Catholic Post/Tom Dermody)

The sanctuary furnishings, including a new altar and ambo with matching presider chair, were designed by Daprato Rigali Studios of Chicago.

Following Mass, those in attendance — including members of the diocesan Curia and representatives of River City Construction — were invited to a lunch in the retreat center’s new dining hall, followed by tours of the facility.

EDITOR’S NOTE: More photos from the Mass of Dedication have been posted to The Catholic Post’s site on Facebook.