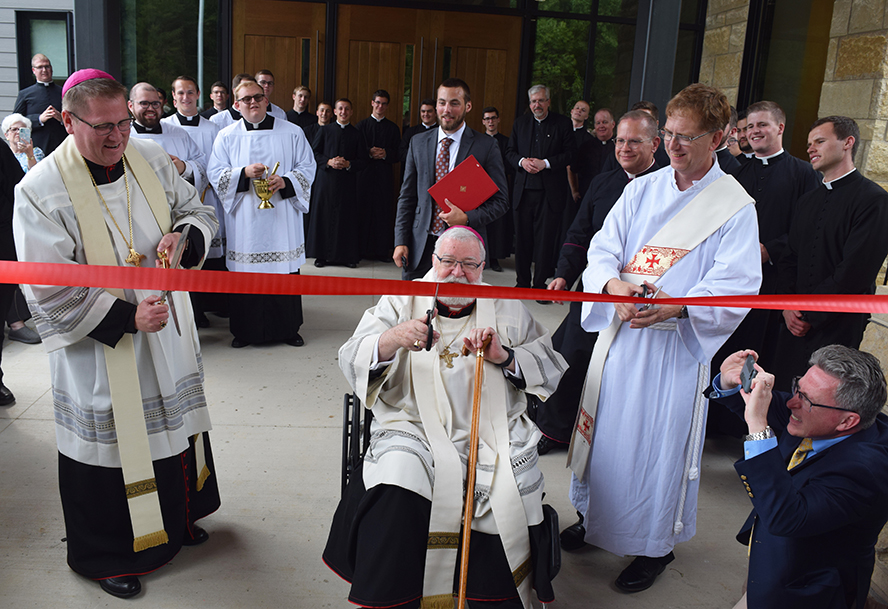 MAGNOLIA – The reviews started coming in shortly after the doors opened on Aug. 1 at the Diocese of Peoria’s new Sacré-Coeur Retreat Center. And they are glowing.

Nancy agreed and, noting the aesthetics of both the facility and the rural setting, added “it would be great to come here for a retreat some day.” 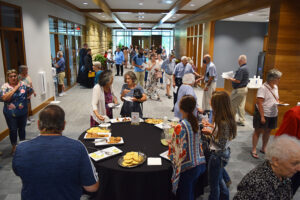 Visitors fill the spacious lobby of the Diocese of Peoria’s new Sacré-Coeur Retreat Center in Magnolia during an open house on Aug. 1. (The Catholic Post/Tom Dermody)

“This is a top-notch facility,” said Paul Henderson, a member of St. Patrick Parish in Washington who is active in Cursillo and took part in gatherings at the former retreat center when the site was known as Nazareth House or King’s House. “This is just beautiful,” he continued. “There aren’t that many retreat centers around, especially of this quality.”

These comments were typical of the reactions of perhaps more than 500 guests who took advantage of the first opportunity for the public to see the newly constructed Sacré-Coeur Retreat Center in Magnolia.

“You represent so many people who made this happen,” said Bishop Daniel R. Jenky, CSC, looking out at the crowd that assembled mid-afternoon for a ribbon cutting and blessing ceremony. He especially thanked “our wonderful benefactors who allowed us to open without debt,” and noted the many concept contributions of Coadjutor Bishop Louis Tylka.

“Bishop Lou, in the best sense, has his fingerprints all over this building,” said Bishop Jenky, who prayed that “the word of God may always echo” from the new facility’s walls.

“In addition to a place of retreats, may it also be a center that serves the larger role of evangelization,” said Bishop Jenky.

Bishop Tylka, who later was one of several clergy to walk through the conference center and guest rooms blessing them with holy water, prayed that “all who come here know the presence of Christ, experience the joy of his friendship, and grow in his love.” 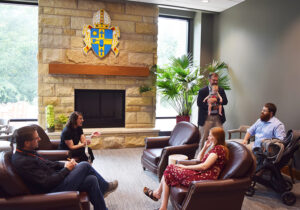 Open house guests enjoy conversation in the community room named for Bishop Jenky at the Diocese of Peoria’s new Sacré-Coeur Retreat Center in Magnolia on Sunday. (The Catholic Post/Tom Dermody)

About 30 people were in line when the doors opened at 2 p.m. Among the first was Jerry Comisky, a member of St. John the Baptist Parish in Lostant. After walking throughout the facility – including riding up to the fourth floor of the guest room building to see the view of the pond and surrounding countryside, he also declared it “beautiful.”

“It will be a very nice, quiet place for retreats,” said Comisky.

The retreat center’s parking lots soon filled and visitors eventually parked far up the entrance road. Once they entered the retreat center they were greeted by both Bishop Jenky and Bishop Tylka. Light refreshments were served in the main lobby of the conference center as the visitors made their way through two chapels, four conference rooms, the kitchen and dining room, the Fulton Sheen Library, and into the four-story building of guest rooms.

Coming out of one of those guest rooms, Orlando Lopez was already thinking of bringing members of Epiphany Parish in Normal — where he in charge of outreach ministry — to the facility for a retreat.

“The area is beautiful,” said Lopez, who was invited to the open house by Sister Michelle Fernandez, SCTJM, director of Catholic Charities for the Diocese of Peoria. Noting he coordinates those interested in community service, “I think having a retreat would be a very good idea.”

“We need to find ways to attract people to our church and go deeper in the faith,” said Lopez. “It’s a wonderful opportunity if we could use this beautiful place.”

The first to take advantage of that opportunity were the seminarians of the Diocese of Peoria, who were on hand to greet open house visitors and then remained for their own retreat before returning to school.

The retreat center’s Chapel of the Sacred Heart was consecrated during an invitation-only Mass on Monday morning.

EDITOR’S NOTE: More photos from the open house have been posted to The Catholic Post’s site on Facebook.