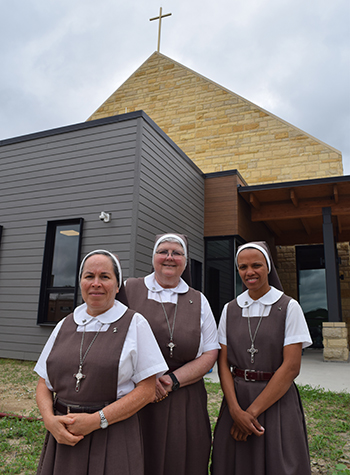 MAGNOLIA — As impressive as the physical complex of the new Sacré-Coeur Retreat Center is, it would be a shell without its heart and soul.

“Our mission is to provide a sacred and peaceful environment that will allow individuals the opportunity to have a personal encounter with the Sacred Heart of Jesus,” reads a framed statement at the retreat center’s welcome desk. 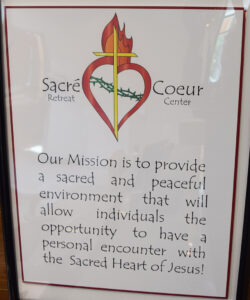 The Sacré-Coeur Retreat Center mission statement will be displayed at the welcome desk. (The Catholic Post/Tom Dermody)

And living reminders of the new facility’s mission are three Servants of the Pierced Hearts of Jesus and Mary who have been given staff leadership roles.

“We are here to serve in a practical manner, but our main service — and what we are here to do — is the spiritual service of souls,” said Sister Ana Pia Cordua, SCTJM, who will be operations supervisor working with Deacon Terry Stalsberg, retreat center executive director.

“Anybody can clean, cook, receive people,” said Sister Ana Pia, who has served in diocesan leadership for the past decade. She is a former director of Catholic Charities, been active in Respect Life and Hispanic ministries, and until this spring was diocesan director of evangelization and faith formation. “But it is through the spiritual maternity of our religious life that we’ll be able to serve souls in our capacity as religious,” she continued, “which goes beyond the practicality of the service we can provide through our physical work.”

“A BEAUTIFUL GIFT TO THIS DIOCESE”

While the Sisters will reside at Visitation Convent in Peoria, during overnight retreats they will stay in rooms reserved for them on part of the fourth floor of Sacré-Coeur. The suite includes a small chapel.

“We’ll be available for anybody who would like to have a spiritual conversation or some kind of pastoral care,” said Sister Ana Pia.

For Sister Laura, it will be a return to a familiar ministry. She was in charge of housekeeping for four years at Sacré-Coeur’s predecessor, Nazareth House, and assisted in the kitchen and other areas as needed.

Those familiar with Nazareth House, built in 1961 and formerly known as King’s House of Retreats, will be “astounded” at the new facility. 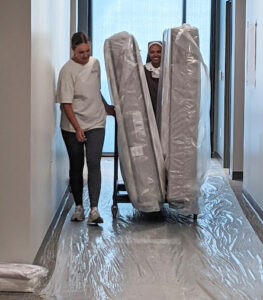 Sister Catherine Grace, SCTJM, and volunteer Anna Alexander wheel mattresses down a hallway after dozens of them were delivered for guest rooms at Sacré-Coeur Retreat Center in mid-July. (Provided photo)

“That’s the perfect word, astounded,” said Sister Laura, who will celebrate 25 years of her profession of vows with her religious community in October and has extensive teaching experience. “What a beautiful gift the Lord has given to this diocese, such a beautiful retreat house.” The beauty, coupled with expanded space and the latest technology, will lead to even better service, she said.

A PLACE OF ENCOUNTER, REST, RENEWAL

Sister Catherine Grace served last year in campus ministry at St. John’s Catholic Newman Center at the University of Illinois. Prior to that, she assisted missions of her community in Miami, professing her final vows in 2019.

“It was a joy to serve the students and staff” at the Newman Center, she said. Despite the impact of the COVID-19 pandemic on the school year, “we were able to touch a lot of hearts in a small time.”

Housekeeping oversight will be new to Sister Catherine Grace, but “I’m learning,” she told The Catholic Post. “I’ll be ready.”

All three Sisters will be on hand from 2 to 5 p.m. on Sunday, Aug. 1, during the open house at the new retreat center. They look forward to giving tours.

Sister Ana Pia predicts the Sacré-Coeur Retreat Center will be “a projection of its name,” which means “Sacred Heart.”

“It’s going to be a spiritual heart,” she said. “I can see this being a spiritual heart of the diocese where people can come and have an encounter with the Lord and deepen their relationship with the love of the Lord, which is symbolized in his heart.”

Joining Deacon Stalsberg and the Sisters on the retreat center staff will be a full-time cook as well as part-time servers and housekeepers.