Paul Moore: ‘Falling’ in love with Jesus through Mary via the rosary

At first, I thought she had a dog leash in her hand, but where was the dog? I felt badly for her, walking in the rain, looking for that dog.

Then I looked closer. That wasn’t a dog leash draping from her hand; she was saying a rosary in the rain. I could see in her attitude, similar to people who actually are walking dogs, that this was probably something she did every day — rain or shine.

By the time I realized it was the rosary and not Rover for whom she was walking, she was well past me, as we were traveling in opposite directions (though, as I had been saying the rosary, too, it occurred to me that we were headed in the same direction in the larger scheme of things).

In the glance she gave me as a passing motorist, there would have been no way for her to tell that I was saying the rosary as well. As it happens, I was just finishing the third Glorious mystery — the Descent of the Holy Spirit. I wondered which one she was saying.

As our paths crossed, we couldn’t hear what Jesus would have heard — two souls who thought they were praying alone, but to His loving ear were joined together in a harmonious chorus of praise inspired by his Mother Mary.

I’m sure we weren’t the only voices in that choir. People around the world pray their way around the decades of the rosary daily. I asked Google how many, but it didn’t seem to have an answer.

A LIVING LINK THROUGH GENERATIONS

The globe-spanning reach of the prayer is illustrated by the Eternal Word Television Network (EWTN) International Rosary on YouTube, with people of all ages and cultures reciting the rosary, or to quote the EWTN website, “. . . what St. John Paul II called, ‘the school of Mary.’”

Speaking of school, a few days later I attended a Mass conducted for the grades 1-6 participants of the Totus Tuus summer youth program at St. Mary Parish in Metamora. During his homily/conversation with the kids, Father Vien Van Do, pastor, quizzed them as to what three requests Our Lady made at Fatima (two of them being penance and devotion to her Immaculate Heart). A young girl answered, “Pray the rosary daily.”

Father was pleased. I was blessed as well. It is a consolation for me to know that the rosary exists as a living link not only to believers around the world, but down through the generations. It’s all in that Latin phrase “Totus Tuus,” popularized as John Paul’s papal motto. The phrase means “totally yours,” and it was his expression of complete abandonment to Jesus through Mary.

A LEAP OF FAITH

My fellow Catholic Post columnist Lindsey Weishar alludes to the spirit of trust necessary for that leap of faith in her poem “Fledgling” (from the book “Matchbook Night,” winner of the Overleaf Chapbook Manuscript Competition, 2017; available from Leaf Press).

Lindsey read from “Fledgling” as part of our talk on the Catholic Conversations radio show on Catholic Spirit Radio, which aired the weekend of July 24-25 (podcast available at catholicspiritradio.com). The poem is about a time she was staying with a family in Sicily, and when they went swimming, a dad taught his daughter to jump safely from a rock. 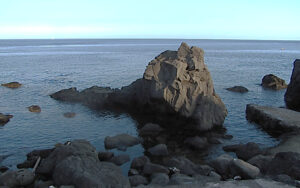 This rock in the Ionian Sea witnessed a leap of faith. (Photo courtesy Lindsey Weishar)

who sits at the pinnacle,

She’s ready to climb cliff faces with him,

but for a moment

she needs his grip,

for the furious flight into abandonment.

We are all fledglings in the faith. Little do we understand that the rock of ages from which we jump, and the living water into which we are received, are one and the same.

The rosary is a link to understanding the love of Jesus through the love of his Blessed Mother.

What we hold in our hands helps us realize that when we risk the leap of faith, we’ve already been caught. As Isaiah 49:16 reminds us, “upon the palms of my hands I have engraved you.”