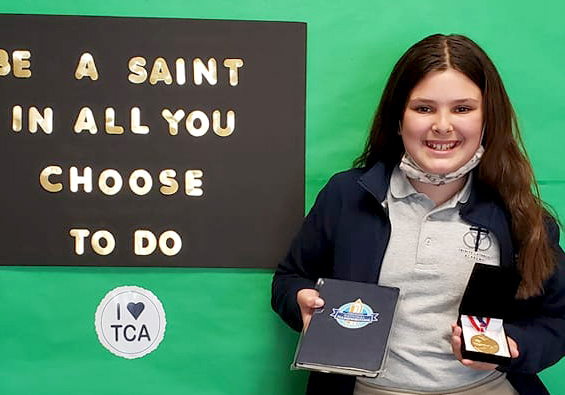 Hanna Waszkowiak holds the journal and medal the Trinity Catholic Academy student received as a fifth grader for winning the state title in the 2021 Zaner-Bloser National Handwriting Contest. (Provided photo)

LASALLE — Texting and email may rule the day in terms of communication for many people, but don’t count out handwriting just yet. Hanna Waszkowiak certainly hasn’t and it took the Trinity Catholic Academy student to a state title in the 2021 Zaner-Bloser National Handwriting Contest.

She was named the top fifth-grader in Illinois for the shape, size, spacing and slant of her penmanship, which are the Zaner-Bloser Keys to Legibility. The sentence all the contestants were required to write on their entry form was “The quick brown fox jumps over the lazy dog” because it uses every letter of the alphabet.

“One of the other students said, ‘Look at this! You can’t tell the difference between what she wrote and what’s in the book’ and it was true,” said teacher Mike Bacidore. “Her handwriting looks like the examples they had in the book.”

“It helps me think better,” Hanna said of writing things out in cursive. “It’s easier for me to write something than try to think of what I’m going to text or email someone. It’s always been more helpful to write something rather than text.”

Bacidore said research has shown that students often have a better flow of ideas and retain information better when they use cursive, too. Printing, on the other hand, forces the writer to stop after every letter.

Hanna finds that to be true, too.

Zaner-Bloser also asked contestants about why handwriting is important and how it affects other people.

“It is important to people because it would help them when they get older to sign things,” Hanna told The Catholic Post. “I know people who are older than me who can’t read cursive and can’t write cursive.”

She practices at home and at school and said her school assignments have played an important role in perfecting her skills. She also has kept a journal since she was in the second grade.

Her favorite writing implement is a fine tip pen.

“Hanna is a good student, a good example,” Bacidore said. “She has an excellent attitude.”

To encourage his students to improve, he holds quarterly competitions, often calling in other teachers to help him judge if he has a close call. He said Hanna won more than once.

“It became apparent quickly that Hanna’s handwriting was just exceptional and she continued to develop it,” Bacidore said, which is why he encouraged her to enter the Zaner-Bloser contest.

She said she was surprised and shocked to be named the fifth grade champion in Illinois.

“I thought a lot of the kids in my class had better handwriting than I did because a lot of them worked very hard on it,” she said. “I was surprised and happy.”

Hanna will have plenty of opportunity to continue practicing — she received a journal as a prize, along with a Zaner-Bloser medal.

While she is preparing to start sixth grade, she has been playing first base on a softball team made up of all stars from LaSalle. She hopes to play softball at Trinity Catholic Academy this year, as well as basketball, volleyball and track.

Jenny Waszkowiak said she and her husband, Paul, are very proud of Hanna and her handwriting abilities.

“She did practice a lot for it. She wanted it to look good. I think, like she said, it helps her focus better,” she said, adding, “I think it helps her go further in her studies.”