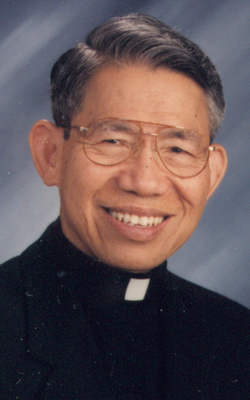 CHAMPAIGN — A funeral Mass will be offered at St. Matthew Church here at 11 a.m. on Thursday, July 29, for Father Joseph M. Mai-Chi-Thanh, pastor emeritus of St. Mary Parish in Pesotum.

Father Mai-Chi-Thanh, a native of Vietnam who ministered to Vietnamese Catholics in the Champaign and Peoria regions, died on Sunday, July 25, 2021, in Champaign. He was 92.

Coadjutor Bishop Louis Tylka will be principal celebrant of the funeral Mass, with Father Joel Phelps as homilist. Visitation will take place from 9:45 to 10:45 a.m. at St. Matthew Church prior to the Mass.

Burial will be at St. Mary Cemetery in Pesotum.

(EDITOR’S NOTE: For the text of the funeral homily, click here.)

Born on Aug. 16, 1928, in Sachau, North Vietnam to Mai Tam Tinh and Pham Thi Quat, his interest in the priesthood was already apparent by age 7 as he “celebrated Mass” and led outdoor processions for neighborhood children. He went on to major in philosophy at the major seminary of St. Albert the Great in NamDinh and in theology at the Dominican House of Studies, Hong Kong.

He was ordained to the priesthood at St. Mary’s Cathedral in Saigon, Vietnam, on May 29, 1957.

In the early years of his ministry, Father Mai-Chi-Thanh taught high school French and served as parochial vicar of a parish with 10,000 members.  Dedicated to improving living conditions in the area, which was hit by frequent flooding, he worked with an American relief agency to build a sewer system that could handle the flood waters. He also helped establish a high school for 1,500 students, and served as a chaplain for 10 Legion of Mary groups, hearing confessions every night.

TO THE U.S. AND DIOCESE OF PEORIA

Father Mai-Chi-Thanh traveled to the United States in 1973 to accept a scholarship at Boston College, where he began studies for a master’s degree in education. During summers he would visit friends in central Illinois, including Father John Thua.

When South Vietnam fell to the communists in 1975, Father Mai-Chi-Thanh decided to remain in the United States. Granted permission to come to the Diocese of Peoria in 1977 by Bishop Edward W. O’Rourke, he first served as administrator and then pastor at St. Augustine Parish, St. Augustine, and St. Patrick Parish in Raritan.

In 1984, he was named pastor of Sacred Heart, Farmer City, and St. John, Bellflower, serving those faith communities for the next nine years.

His final assignment was as pastor of St. Joseph and St. Mary parishes, both in Pesotum, from 1993 until he was granted senior status with the title of pastor emeritus in 2004. In retirement he translated two books into Vietnamese — one a biography of St. Maximilian Kolbe, originally in French, and the other a work on Mariology, written in Spanish.

Reflecting on his priesthood on the occasion of his 50th jubilee in 2007, Father Mai-Chi-Thanh told The Catholic Post he greatly enjoyed celebrating Mass. “God has given me the joy of celebrating his presence every day in the Mass,” he said.

Memorials may be made to St. Mary Parish, Pesotum, or the St. Therese Seminarian Fund.