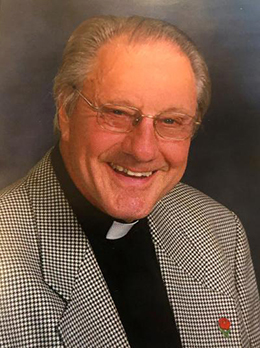 A Mass of Christian Burial will be celebrated at St. Mary’s Cathedral in Peoria on Monday morning, July 19, for Father J. Thomas Henseler, a senior priest who was a pioneer leader in the Cursillo and permanent diaconate programs of the Diocese of Peoria.

Father Henseler, who also served in the Diocese of Springfield as pastor of Holy Family Parish in Mount Sterling from 1993 to 2009, died on Friday, July 9, 2021, at Snyder Village Retirement Community in Metamora. He was 85.

In Peoria, visitation is scheduled at St. Mary’s Cathedral beginning at 9 a.m. on Monday. The funeral Mass begins at 10:30 a.m., with Coadjutor Bishop Louis Tylka as principal celebrant and Father R. Michael Schaab as homilist. Bishop Daniel R. Jenky, CSC, will be present in choro. A luncheon will be served at Alexander’s Steakhouse in Peoria after Mass.

(UPDATE: The text of the funeral homily is found here and a video from the conclusion of the Mass is found here.)

In Mount Sterling, visitation will begin at 8 a.m. on Tuesday, July 20, at Hendricker Funeral Home. A funeral Mass is scheduled at Holy Family Church there at 10:30 a.m., followed by a mercy meal at the Mount Sterling Knights of Columbus Hall.

Burial will follow at 3:30 p.m. at St. Joseph Cemetery in Canton with military rites by the U.S. Navy Honors Detail and Canton VFW Post 1984.

Born March 21, 1936, at OSF Saint Francis Hospital in Peoria, he was the fifth of nine children of Alexander Joseph and Marcella (Ary) Henseler.

He attended St. Mary School in Canton and graduated from Canton High School in 1954. After one year at St. Ambrose College in Davenport, Iowa, he began his preparation for the priesthood at St. Bede College in Peru, completing his final six years of theological studies at St. Meinrad Seminary in St. Meinrad, Indiana.

Father Henseler was ordained a priest of the Diocese of Peoria by Bishop John B. Franz on May 26, 1963. He served as parochial vicar at St. Patrick Parish in Peoria until 1970, when he was given permission to become a U.S. Navy chaplain in San Diego.

At the request of Bishop Edward W. O’Rourke, in 1972 he began leadership in the diocese’s fledgling Cursillo movement — begun eight years earlier — and the newly established permanent diaconate program. He would direct them both for nearly two decades.

“People have the conversion experience and then go back to their parishes,” said Father Henseler of Cursillo in 1989 on the occasion of the movement’s 25th anniversary locally. Noting that many of the diocese’s deacons made Cursillo retreats and that other participants often take on parish leadership roles, he said the weekends can be a time “when the Holy Spirit perhaps opened them up to a deeper calling in the church.”

When he stepped down from Cursillo in 1991, Father Henseler called it “a ministry that I have cherished and grown from over the past 20 years.”

Regarding the permanent diaconate, Father Henseler called the diocese’s training program “one of the most innovative and creative in the country” when the first class observed its 10th anniversary of ordination in 1986. He especially noted the significant involvement of the deacons’ wives in the candidates’ formation process.

“It was one of our best decisions,” he told The Catholic Post. He said that while deacons receive the sacrament of Holy Orders at ordination, for most of them “matrimony came first.”

Father Henseler served as pastor of St. Edward Parish in Chillicothe from 1990 to 1992. In 1993, he was assigned outside the diocese as pastor of Holy Family Parish and St. Mary School in Mount Sterling. He also served as chaplain at Western Illinois Correctional Institution in Mount Sterling during his 16 years in the community.

His other leadership positions included service on the board of directors of St. Jude Midwest Affiliate, including a term as president; membership on the St. Augustine Manor, Peoria, board of directors; chaplain for the Bradley University basketball team from 1978 to 1986; and establishing the Walk to Emmaus program internationally.

Father Henseler was known for an ecumenical approach in ministry and concern for the downtrodden.

He is survived by four siblings, A.J. Henseler Jr., Victoria Kuntzman, Mary Beth Murray, Patricia Florey, and 28 nieces and nephews. He was preceded in death by his parents and four siblings, Philip, Richard, Alice, and John.