In ‘The Jesus Diary,’ Pontiac parishioner tells fictional account of an eyewitness 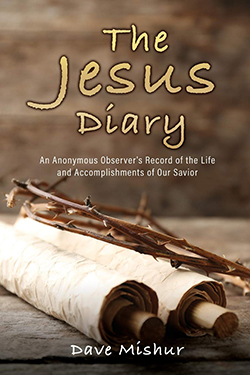 PONTIAC — Imagine being present for many of the miracles and teachings during the earthly life of Jesus.

Dave Mishur, a member of St. Mary Parish here, did just that in recent months. The result is “The Jesus Diary,” the first book by the retired newspaper columnist and public relations consultant. 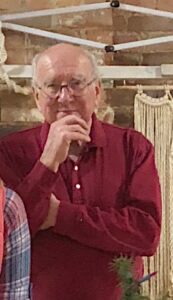 In the fictional account based on the Gospel texts, Mishur tells of discovering a scroll inside a sealed ceramic water jug purchased from a central Illinois antique store. It turns out the scroll is a diary kept by a witness to the miracle of Jesus’ birth who then made a point of keeping track of Jesus throughout his life.

“I tried to imagine what it would be like to actually be on the scene while Jesus did these wondrous things, and see the reactions of the people he cured as well as those who observed him in action,” said Mishur, whose column “Second Thoughts” was syndicated in local newspapers for 15 years.

And that’s what “The Jesus Diary” does very well. Mishur takes the widely known, but highly condensed Gospel accounts and adds imaginary color. One delightful example is the scene when Jesus is surrounded by children, which irritated some of the apostles. In Mishur’s account, one of the children — a shy young girl — hands Jesus a bunch of flowers.

“I picked these for you, Jesus,” the girl tells Jesus, adding “I love you.” Jesus thanks her and the girl runs off grinning.

Through the anonymous diary keeper, readers not only share the sense of marvel at Jesus’ works and teachings, but also the confusion and doubt even his closest followers experienced before they embraced him as the Son of God. The animosity of the religious leaders of the day toward Jesus is vividly portrayed, and there is a lengthy tale of an encounter with Judas on the night he betrayed the Savior.

Mishur calls the book “historical fiction” and hopes that it leads “more people to actually pick up the Sacred Scriptures and immerse themselves in the Gospels.”

Mishur had time to do that himself after the death of his wife, Pat, last August. The couple had been married for 55 years, and Dave dedicates the book to her memory, calling Pat “the saint I married.”

The book’s first chapter, telling of an eyewitness to Jesus’ birth, had already been written. In fact, it was published as an essay in The Catholic Post’s 2017 Christmas edition.

“I dedicated a couple of hours a day to expand that original concept, which had been very well received and reprinted,” said Mishur.

He told The Catholic Post he is already thinking about a sequel based on the Acts of the Apostles in which his anonymous observer establishes a relationship with the apostle John and also meets Paul.

“The Jesus Diary” was published in early May by Xulon Press, a Christian imprint of Salem Communications. The 152-page book is available at Lagron-Miller in Peoria as well as online through the publisher or via Amazon.