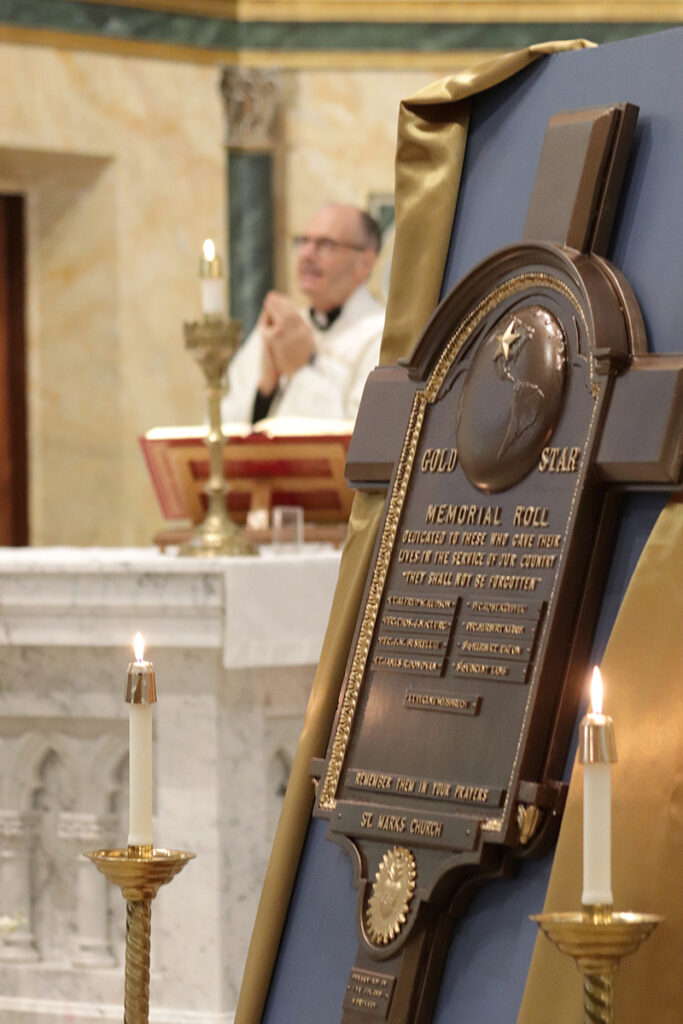 She never knew her father, but Ann May of Peoria has been told he was talkative and could be stubborn. “Just a kid from St. Mark who would have played basketball right here,” she said as she stood in the school gym on Memorial Day.

That “kid” was Marine Lt. James Richard Donovan, who died on June 18, 1944, from injuries sustained while fighting on Saipan — about two months before Mrs. May was born. He was remembered at the inaugural Gold Star Mass at St. Mark Church on May 31, along with eight other members of the parish who gave their lives in the service of their country during World War II.

A restored plaque bearing the names of the nine men was blessed and rededicated by Msgr. Brian Brownsey, pastor, at the Mass and taken by members of Boy Scout Troop 225 to the entrance of church, where it was hung. Maria King Carroll, director of advancement at St. Mark School, said the new location would allow people to see it whenever they come for Mass. 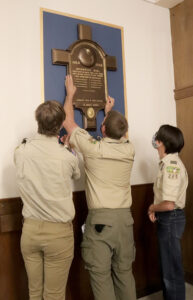 Members of Boy Scout Troop 225 hang a restored plaque honoring nine members of St. Mark Parish who died in World War II just inside the doors of the church during the inaugural Gold Star Mass on Memorial Day, May 31. (The Catholic Post/Jennifer Willems)

“The plaque had hung in the church, but was removed at some point. We’re not sure when — maybe during one of the redecorations,” Carroll told The Catholic Post. “We found it a few years ago in the church basement and it wasn’t in real good shape.”

Heritage Restoration and Design Studio of Peoria took care of that, patching chipped areas and making it shine.

In addition to Donovan, the names on the plaque include: Army Air Corps Lt. Alfred “Al” Hudson, who died Oct. 23, 1943, while training as a bombardier in Idaho; Marine Pfc. John “Jack” Walter Bushell, who died in the assault of Roi and Namur Islands on Feb. 1, 1944; Navy Seaman 1/c Herbert Anthony Eaton, who was on the oil tanker U.S. Fort Lee when it was torpedoed on Nov. 2, 1944, in the Indian Ocean; Army Pfc. Robert E. Klepfer, who died Sept. 17, 1944, in the Battle of Wallendorf; and Royal Air Force Lt. and Army Air Force Lt. Eugene F. Weisbruch, who was killed while co-piloting a B-24 Bomber out of Wake Island.

Also listed on the plaque are Marine Corps Pfc. Thomas “Tom” Joseph McClurg, who was taken prisoner by the Japanese during fighting on the island of Tarawa in December 1943 and was declared dead on Dec. 10, 1944; Navy F/1c Vincent Dayton Lamb, who was killed in a mail truck accident on Dec. 29, 1944; and Army Pvt. Herbert A. Kelch, who died Jan. 13, 1945, in the Battle of the Bulge.

Mrs. May and her sons, James and Joseph Jorgensen, were one of five families found and invited to the Memorial Day Mass. Family members took part by serving as lectors, servers and musicians for the liturgy.

“We know there are others in our parish who have made the ultimate sacrifice,” said Lt. Col. Tom Dwyer of the 182nd Wing of the Illinois Air National Guard and a St. Mark parishioner. He added that they hoped to make the Gold Star Mass an annual event.

Following the Mass there was a reception in the St. Mark School Gym and memorabilia from the service members was available for viewing.

Among the treasured items was a rosary Donovan carried with him on the battlefield. Msgr. Brownsey held it up during Mass and talked about how it was essential to the young man because it connected him to his loved ones as well as his faith.

“Every day people step up and say, ‘I will serve,’ knowing full well that likely what awaits them is nothing less than what was promised by our Lord — the cross,” Msgr. Brownsey said, noting that some would look at the blood and the nails and say, “What a shame.”

But it is what happened on the cross that turned pain into healing, sickness into health, hatred into love, and death into life, he explained.